Bill "Superfoot" Wallace is a household name for anyone who reads Black Belt magazine . The legendary kicker and champion is still kicking. and kicking high.

It is not everyday that you meet a legend yet I remember the day I met two. It was a Thursday night at Karate College in Virginia when I had the pleasure and the privilege of meeting Bill Wallace and Joe Lewis, two men who are not only talented martial artists but also so funny they could easily be a successful comedy team. I had met both men earlier in a sense, on the pages of martial arts magazines. I had read so many articles by them and about them that I felt as if I had known them. Meeting them in person added the element of voice. 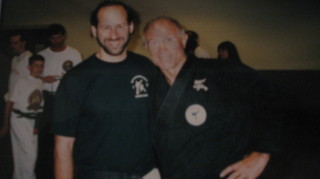 With Superfoot at Karate College, 2004

The lesson with Bill Wallace was a dream come true. Turns out that he is in fact as good as they say. At 60 years old he was the best kicker I have ever seen. Not only can he do full splits but he can do it straight up in the air and he can hold his foot there while doing 60 or more rapid fire kicks without touching the ground.

Mr. Wallace teaches his classes in a very enjoyable way and through a combination of insults, jokes and pushes he manages to get everyone working hard and doing there best. He says, "I am going to insult you, I am going to call you names, and I just want you to know that I mean it."

People who just met become good friends as they are holding on to each other for dear life while doing their sets of 60 kicks without touching the ground. No one wants to be caught by Mr. Wallace with his or her foot down. Bill Wallace is the ice-breaker. He gives the first class at Karate College and gets everyone in the mood. He is friendly and kind yet makes sure you are doing the job and not slacking off.

Many people with handicaps sit at home while collecting disability checks, not Bill Wallace. At times it seems he has trouble walking straight. He has suffered some very difficult injuries in the past and in fact can only kick from one side. Despite this he became a world champion kickboxer and successful seminar instructor. He is living proof that it is not the number of techniques you know that counts, but rather, how well you do the techniques you know, and your attitude towards life.

Although his fame is from his karate tournament days he is also an authority on self defense. Though not a Krav Maga practitioner he shares much of the same common sense approach to self defense.

Outside of class I found Mr. Wallace to be kind, patient, generous of spirit, and friendly, simply a delight to be with, and that is the true mark of a champion.