Do We Need This?
By Moshe Katz

Do We Need This?

The world is filled with the unknown. So let us begin our IKI Krav Maga training with humility. We don't know anything.

When I was young, I asked my father, "Dad, where will we be five years from now?" my wise dad answered, "Son, I don't know where we will be tomorrow." We simply don't know what will be.

Sometimes I will be teaching a group of students, and someone will say, "This part I don't need to know, this does not apply to me."

Oh really!? So you are so psychic that you know in advance what will happen and what won't? Then perhaps you already know who will attack you and who won't, maybe you don't need any of this. Really, do any of us know what will happen? 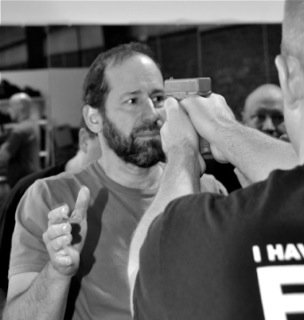 Did you see this coming? Do you know what to do next?

Take a look at airport security, it is always a matter of lets' look for threats based on what has happened. It is never "Lets' look for threats based on what could happen." In my book "Israel, a Nation of Warriors" (See Krav Maga books) I discuss the Israeli method of profiling used at airports. We don't look for attacks that have already taken place; we look for people that are likely to perpetrate some sort of attack. We look for the attack that has not yet happened.

Even when others warn us we tend to ignore the warning. Remember the Biblical prophets of old? They warned the people of Israel but we did not listen. Poor Jeremiah talked until he turned blue but no one listened.

So let's begin our Krav Maga training with humility, to quote Itay Gil in the Human Weapon , "You don't know sh…t, now let's start training." These guys had traveled the world, trained with experts but really had no clue how to defend themselves. They were humble enough to admit it.

Life is unpredictable, people are unpredictable. So much can happen. I remember thinking "I will never need to know Spanish! Why should I bother learning it!" When we speak like this we speak with arrogance. Now suddenly I really could use Spanish. Many Spanish speakers write to me, I have taught in Puerto Rico and have been asked to teach in South America and in Spain. I never anticipated this.

Friends can become enemies, old enemies can become friends. People you trusted can turn on you. Our answer, our mantra; "I didn't see this coming"

So in Krav Maga we began our training with the idea that anything can happen so be ready! We don't want to ever say, "But I didn't see this coming!" (What a lame excuse). When I train with my teacher, as I did just the other day, we begin with humility; "What if the guy holds the gun like this, what if he moves his arm like that?" we are always training to anticipate what might happen, we are always open to the idea that anything can happen in life.

Do we need this? Do we need to train in gun disarms? I recall teaching in America, college campuses , years ago, and students would inform me, "We don't need to train in gun disarms, this is not relevant to us." Oh really, smarty pants!? Guess what happened? At Virginia Tech a guy decides he does not like his fellow students, so he gets a gun and shoots a bunch of them. Now no one tells me " Gun disarms are not relevant on college campuses". Only it would have been smarter to say, "Y'know, this could happen so lets be open minded and learn it and hopefully it will never be relevant to our lives.

In some countries people still tell me, "We don't need gun disarms. We don't carry guns like you guys in Israel". Now if the terrorists and criminals would tell me this than it would carry a little more weight.

I ask again, "Do we need this?" and I answer, "I don't know. So I will train in it, and I will prepare myself as best as I can for every situation I can imagine." The other day I was watching a re-run of Law and Order, good show. So these three teenagers are just hanging around in a park late at night, they are honor students but this is a "bad" neighborhood. Now some punk with an illegal handgun comes up to them, gets into an argument and then shots all three of them, just like that. There was no motive, only; "They acted like they was better than me, so I shot the bitch". (How can you argue with that logic, how can you see that coming?) Now I know, "this story is purely fictional and is not based on actual events" but we all know that although the details of this particular show may be fictional, it is clearly based on real life events, and thus we should pay close attention. So I was watching this and thinking, "What would I do? How can we deal with this kind of situation?"

These kids were not gang members, they were not involved in any illegal dealings, and yet they still fell victim to violent crime. We have to anticipate this sort of thing, we have to be ready! That is what our training is all about. Begin with humility, we don't know what will happen, and lets' take it from there. Lets try to anticipate all the possibilities, let's stay one step ahead of the unknown.