I want to focus here on the principles of reality knife defense, based on the Krav Maga experience.

There are many types of knife defense. You can study the Philipino styles; Arnis, Kali, Escrima. You can learn how to use a stick vs. a knife. Jujitsu, Ninjitsu, Kung fu, Systema; they all have knife defenses and they all have good technique. You have to ask yourself, 'Is this reality knife defense that suits my life circumstances?'

Over my years of training, in many styles, with many great people, I have come to learn a few things about survival and edged weapon attacks. These principles are incorporated in our style of Krav Maga. 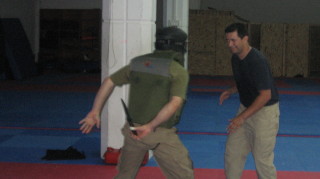 A great way to train for reality knife defense, is to wear full protective gear, hide the knife behind your back, and attack the person with a sudden, relentless burst. This mimics reality.

Understand Your Weapon - In order to be able to defend against a weapon you should learn how to fight with that weapon. This is part of 'reality knife defense'. This applies to a gun as well as a knife, a baton, or any blunt or edged weapon. Most martial arts schools teach only pure defense, if at all, if you don't understand how an attacker will use the weapon against you, you don't have much of a chance.

I find it shocking how many martial arts practitioners still hold on to the concept of 'style loyalty', i.e. "I am a Shotokan man, I will never train in Krav Maga knife defense", "our style is a complete style" and that sort of nonsense. To speak this way only shows that you have never faced real fear, because if you had, you would not care a whit if the technique was from the Native American Indians, the ancient Hebrews or your friend's grandmother; if it works – that's all that matters. Again, keep in mind, 'reality knife defense' and ask yourself, what will help me survive on the street?'

When I first started training in knife defense I learned the defense first, before learning to fight with a knife. My understanding was based on how I wanted to defend, not on the diverse possibilities of how some deranged maniac might attack. I was invited to an Aikido class and it appeared to me that there was only one 'correct' way to attack and all the learned defenses were based on the assumption of that attack. No one bothered asking 'what if the guy did not attack that way'. Again, all the devoted disciples would not, or could not, ask, 'is this reality knife defense?'

This is called the "Myth of the Duel" - spending too much time fighting the mirror image of yourself or your system of techniques. Innocent mistake, but a serious one. The kick boxer never fought on the ground. The wrestlers and Judokans never kickboxed.

Before we identify the solution; block, evasive movement, counter, we must first identify the problem, i.e. the nature of the attack.

We have to understand what might happen, we have to learn this from people 'who have been there and done that.' I get my information from law enforcement professionals and surveillance cameras, or anyone who has been in a real life encounter. This does not beat first hand experience, I admit, but I am not going into a bar looking for a fight with a drunken knife wielding assailant just so I can 'practice'.

Professor Arthur Cohen enlightened me with some scary information such as: many of our knives disarm won't work because they rely upon grabbing. Some gang members anticipate this and rub Vaseline on their arms. Some gang members wear spikes around their wrists so the traditional karate block will get you stabbed. Ignore this type of information and …you better stay in your traditional dojo.

Many traditional jujitsu knife disarms, at least the way they are practiced today, involve taking a person down, pushing their arm and lowering their body. Most ignore the fact that some criminals hide a knife in their boot, thus you could be putting them in a perfect position to grab that knife and stab you in your exposed leg, cutting an artery and causing fatal bleeding. This does not happen in the dojo but he can, and has, happened on the streets. Be aware.

In a conversation with Itay Gil, my instructor, he made a very significant point about our Krav Maga training. There are practitioners in other styles, such as the Filipino styles, that carry two knives and are very proficient with them, more so than us. Perhaps we should put more of an emphasis on this in our training.

The answer is No, for sociological reasons. As it was pointed out in the 'Human Weapon', there are 200 million people in the Middle East and 100 million guns. In other words we are a gun society. Most assailants in this region are not master swordsman, they are angry killers who grab a kitchen knife and desire to kill an infidel (Jew or Christian) so they can go to heaven. They have not had years of knife fighting training.

Now even if they would stab one or two people, catching them by surprise, they would be shot dead very quickly by a nearby soldier, police officer, security guard or ordinary armed and dangerous citizen. Therefore we put some emphasis on a quick knife defense, more emphasis on getting out your gun and shooting the bastard dead on the spot. That's the Israeli way and it has worked well.

More on that point; Very few people here, soldiers or civilians, have the time or inclination to became 'master knife fighters', which takes years. Therefore we train in what is known as "high percentage moves", we attack the knife arm so hard and aggressively that it caused a 'dead hand' affect. The blow is very hard and penetrating and painful. Simultaneously we strike the body or face. Beginning students often will say, 'but then I can do this or that', and I say, 'You can't, the pain will be too great'. It is like shutting down the computer; once it is shut down it cannot perform any functions. We hit the arm and move in aggressively to the body or face, continue with aggressive knee and elbow strikes, and effectively 'shut down the computer'. It is not a picture perfect Hollywood technique but it has proven effective.

I think Bruce Lee said it best all those years ago, "Absorb what is useful, reject what is useless, cultivate what is truly your own.' 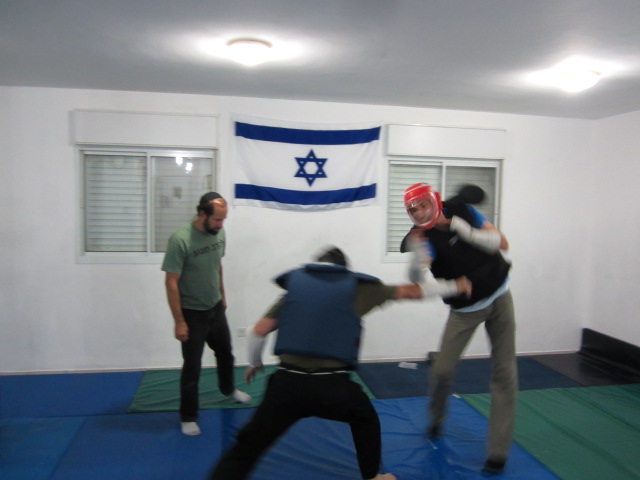