What is Krav Maga thinking, basically it is Israeli thinking.

In a recent book about the Arab hijackings in September 1970 one of the passengers on the hijacked TWA flight writes, "What could we do? The terrorists were armed. We had no choice but to submit."

Around the same time another unit of Arab terrorists attempted to hijack an El Al flight. They did not succeed. Why? Because Israelis don’t say 'What could we do?' they ask, "What shall we do? What will we do about this problem?" Indeed it was original thinking that prevented the hijacking of El Al, despite heavily armed terrorists.

This is Krav Maga thinking, this is Israeli thinking. We learn to think 'on our feet', we learn to improvise. They say you can drop an Israeli in the middle of nowhere and he or she will soon be running a thriving tourist business.

This starts in the Israel Defense Forces , where a certain attitude develops. Each soldier is trained to be able to take over if the commander can no longer function. Each soldier is taught how to change plans and adapt to new circumstances. This became very evident in the 1973 Yom Kippur War where the invading Egyptian forces ran into trouble and got stuck while the Israeli forces adapted, adjusted, improvised and created new plans and strategies. Israelis learn not to follow a text book but to think 'outside the box'.

Krav Maga thinking is also very confrontational. The philosophy is not to avoid the enemy, hoping he will go away, but to confront and engage the enemy. Deal with your problem now, otherwise you will just have to deal with a greater problem later.

Both men and women are trained in this way. This kind of thinking can help you in business, and in any transaction. I was once told, "For Americans 'No' is the end of the discussion, for Israelis, it is the beginning."

This is the crux of the Krav Maga practitioner's thinking; 'my situation is never hopeless, there is always a way out, no matter what the situation, I will still have options.' Our history has taught us this.

This behavior is part of our culture. We begin to learn it as children; we see how the adults behave. We learn to see heroic, selfless behavior, as the norm. Young kids lead demonstrations, block roads to protest dangerous political moves instigated by outside pressure, and build new settlements on hill tops.

Moshe, a soldier home on leave, was riding his bike down Jaffa Road on Wednesday when he spotted the overturned No. 13 bus and a massive bulldozer tearing through the streets of Jerusalem. Realizing that the Arab behind the wheel was in the midst of a terror rampage, Moshe threw his bike to the side of the road and began to chase the bulldozer.

Speaking with reporters several hours after the attack, Moshe recalled the sequence of events that led to his courageous action.

As he began running toward the bulldozer, Moshe said, he shouted to onlookers, asking for a gun. Together with a civilian, he climbed aboard the bulldozer and began wrestling with the driver. "At one point the terrorist yelled out, 'Allahu Akbar,' and stepped on the gas pedal, I drew the weapon of the civilian who was with me and shot the driver three times in the head. I think I did what is expected from every soldier and citizen."

Seconds later, off-duty police anti-terror unit officer Eli Mizrahi climbed aboard and shot the terrorist again, killing him. Moshe's actions were strikingly similar to the quick thinking and fearlessness exhibited in March by Capt. David Shapira, the IDF officer who stormed the capital's Mercaz Harav Yeshiva and killed the Arab terrorist who had massacred eight students there. David Shapira, is Moshe's brother in law. Moshe said Shapria's behavior was an inspiration for him. 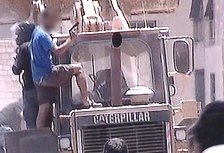 "I thank God who gave me the strength to do what I did," he said, adding that his education in national-religious institutions, and his military training, served as the basis for his courageous conduct.