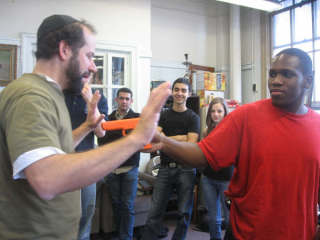 Mankind produces many great theories. We have theories on evolution, on the creation of the earth, on global warming and a million other topics. Some theories make men famous for the duration of their lifetime and then, years later, poof! The theory is dismissed and replaced by another theory.

Most of these theories have one thing in common; you can't really prove if they are true or not. You may 'prove' it with mathematical notations that cover many pages or with abstract concepts that only the brilliant can comprehend but, in reality it remains just that, a theory.

With Krav Maga it should not be that way. Often, however, it is.

Recently I met a Krav Maga practitioner who showed me a certain knife defense. He "explained" it to me with various theories involving the nature of the triangle, the angle of the body as compared to a body in motion, and the concept of a straight line vs. a bent line and so forth. Interesting! To me it made no sense at all so I just said, "interesting" and let it go.

By chance I bumped into the fellow again at Itay's gym and he thought he would share his technique and theory with Itay, as it was "handed down to him" by his teacher, whom he never dared to question. By now you all should know where this story is heading.

Itay was not the least bit interested in hearing about theories, lines straight or crooked, or the nature of bodies in motion. "Stop wasting my time with gooblieguk and grab a knife", he said. Itay attacked the fellow. The Krav practitioner tried his defense, perfect theory and all. Had it been a real knife he would have been what we call shish kabob; chopped meat on a skewer. With an aggressive reality type attack his defense collapsed like the French army in a real war.

So how is it possible, you may ask, that a well known and "respected" style of Krav is doing this? It makes no sense!

The answer lies in the traditional obedience of martial arts training. Sadly even in some reality based system this unhealthy respect continues to plague some.

What do I mean?

Yes, you must respect your teacher. No, don't challenge him on every word. But when it comes to training, your teacher must be willing to test the techniques full force as much as possible without injuring people. These other styles are not putting the techniques to the test, yet they must be tested.

We cannot test the theory of evolution but we can test knife defenses. That is why they created rubber training knives. When I ask my students to attack me, boy, get ready because they are out to kill! (and yes, they do respect me, but I am not a god, I am not untouchable).When a student comes from another style and I see that they comply very sheepishly with what they believe they are "expected" to do; I know they are in trouble. They need a mindset adjustment.

We say there is no such thing as "bad attack" (all attacks are bad, did you know that?). If you fail in your defense you cannot blame the attacker for not attacking as you had been trained. What will you do on the street! Explain to the attacker how he is supposed to attack?

C'mon this is Krav Maga, not a Karate kata!

So in Krav Maga it is OK to have a theory but unlike the theory of planetary movement or evolution we cannot leave it in the realm of theory, we must actualize it by training full force in as realistic a setting as we can. And when you see a style that has techniques that seem unrealistic to you, and you wonder "How can this be?" remember the simple answer; when the student is too obedient, he will believe anything and his instructor will have no need or desire to test these beliefs.

You must train hard and you must test your technique against many opponents/training partners of different sizes and strengths. For this men and women must train together, big people and small people, fast and slow.

This is a new age of training, an age of truth and honesty. You must begin with truth and honesty because, as our teachers told us when we were growing up, when you are dishonest, you are only fooling yourself. In our case your dishonesty can get you turned into shishkabob.

Train hard, make mistakes, get stabbed a bit, get bruised a little, feel your ego getting bruised, be humbled and for God's sake, for your own sake, be honest in your training. That is what IKI Krav Maga is about.