It was 1967 when I moved to Israel. I did not know much about Israeli history, or krav maga, I did not know why the State of Israel and the Israel Defense Forces were so important, I was only a young child.

Other young children, however, did understand. They were born here in our ancient land, their fathers or grandfathers had fought in the wars or came as refugees from Hitler's Europe. They understood what I did not yet understand.

I recall one day when I was outside with my neighbor, a little red headed kid named Ido. Unlike me, Ido was born in Israel to Israeli parents. I picture it like yesterday. I recall the exact spot, though many decades have since passed. 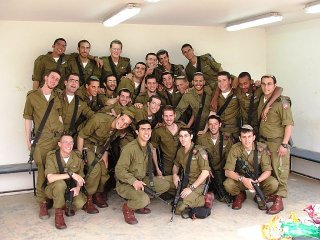 My nephew's unit, the paratroopers

A plane flew over our heads. That's it. No big deal.

Really? For an Israeli, for a Jew, it was a big deal. Little Ido looked up at that place and watched it until it was no longer in sight, then he turned to me and explained, "There was a time when everyone else had planes but we did not, now we have planes too."

He said this with a feeling of surging pride and confidence. I understood, although I was only six years old. There was a time when all the nations had power, guns and war planes, except for us. Now we have them too, now we can feel safe.

Many years have passed since that moment, and much has changed. My dear father who brought us to Israel has since past on, but we have continued in his path. My brothers and I have served in the IDF. My nephew is a paratrooper and fought in the Second Lebanon War to protect our country, a cousin was killed in action. But I recall that little boy and the lesson I learned that day so long ago; the Israel Defense Forces are here to protect us, 'now we have an army like everyone else'.

That is the purpose of the IDF; the Israel Defense Forces. The emphasis is on defense, these forces are here to defend us, so what happened so often in the past shall never happen again.

The book
Israel: A Nation of Warriors

the story of Israel as a fighting nations, on Amazon and Create space