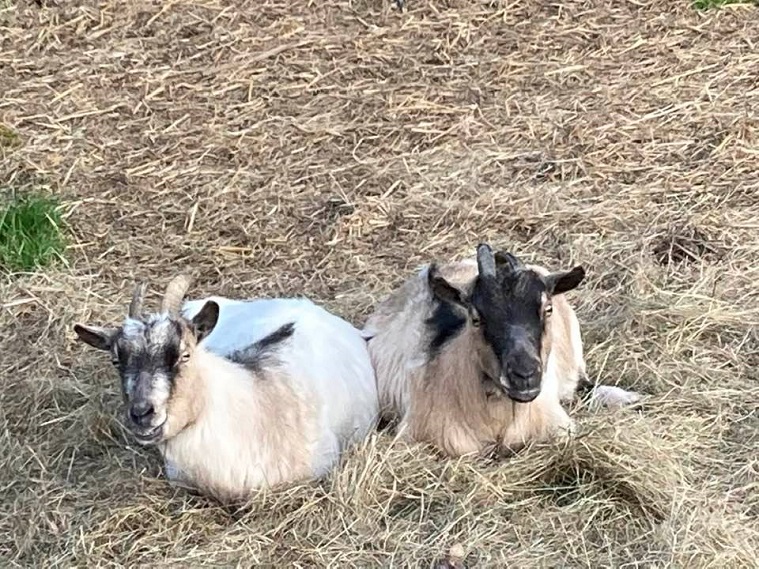 These goats don't smoke, so I chose to spend time with them rather than humans who can't seem to value life.

Sitting in a biergarten, or Beer Garden, in Germany I am confronted with the unpleasant sight and smell of cigarette smoke. I look over at the people in the adjacent table and can read, even in German, the clear warning that smoking causes painful early death. Our group discusses this matter; how is it that people can ignore such a clear warning? How is it that people can ignore something which has become so clear and of which there is no serious doubt or dispute?

Some feel that the answer to this problem lies in early education, i.e. that schools should include a program that teaches how dangerous smoking is to one's health. The assumption here is that once they know the facts, they will make the logical conclusion and the smoking problem will come to an end.

But I personally doubt this.

Why? Because humans are social creatures and are too easily influenced by social norms and behavior. There are all the logical reasons in the world not to smoke, take drugs etc. but people, in particular young people, will continue to do so. They may understand that long term alcohol consumption and long-term smoking will shorten their lives, but they are not thinking long term. They are thinking, I am at a party, my friends are smoking and drinking, I want to be like them, I want them to like me, I want to feel cool, I want to be accepted, so I will do as they do, damn the consequences.

As such no logic will stop these young people. There will be very few young people who will think of the logical consequences of this behavior and reject the tempting offer. However, such young people are rare and will probably avoid these social situations in the first place. So we really don't have much hope.

Great attempts were made in the past to stop the consumption of alcohol as it was destroying lives, careers, and families. This led to the era of Prohibition. All that happened is that this led to the great era of organized crime and the criminals became very rich.

The governments of the world spend billions trying to stop the drug trade but ultimately they have failed. But the solution is quite easy - just stop buying drugs. No one is forcing anyone to purchase drugs, stop the purchasing and the drug trade will collapse. It is in our hands, if we are smart enough.

The same is true for self defense.

We see crime all around us, home invasions, rape, armed robbery. We try to create awareness, increase police presence etc, but it can only go so far. We need to learn to protect ourselves. But how many choose to take up the regular study of self-defense? how many? very few. Statistics show that in the United States, less than 10% of all people over the age of 6 participated in any sort of martial arts training this past year. Of those many only attended one or two classes. Of those who did attend, many attended martial arts fitness classes. Of the reminder most were children. Of the adults most attended traditional art forms without any real life applications. Bottom line: only a miniscule percentage of all teenagers and adults have any knowledge whatsoever of any form of self-defense. May God help us, since we are certainly not helping ourselves.

As my dear father would say; given two choices, the logical/clever one, and the easy one, people will chose the convenient one.

All the logic in the world will not help us make the correct life saving decisions.