Lets' face it, most people go through their entire lives without an original thought. That is why when you study history, (if you study history) you will see decades, nay centuries, with almost no progress. Father to son, father to son. And that which is most resistant to change is the way of thinking. Thus beliefs go unchallenged for centuries, despite logical and historical evidence that disproves them.

Sadly, Martial Arts are no different.

Does anyone stand up and say, Hey! I don't see how this can possible work?

Let us take one of the classic, undisputed, revered techniques of the Krav Maga world: I do not know it's official name but I will call it what it looks like - the Arm Wrap Around.

This venerated technique is used for defense against knives and sticks, although not punches despite the fact that knife attacks happen so quickly there is no way to know if they are knife attacks or punches until you are dead or injured. This just one of the many faults of having different techniques for different attacks, you assume you know what is coming, but you are wrong.

So I will attempt to put this into words; a guy is running towards you super fast with a knife or a stick. The intent is to kill you. You see it coming, run towards him and you do not block the attack, you wrap your opposite arm around his attack arm (the one holding the weapon) and then you can proceed with knee kicks or a judo take down or pulling the guy down forward.

This makes for a great video or performance demonstration. Every one is duly impressed with your speed and aggression and they either applaud or sign up for Krav Maga lessons. It works great in class.

I completely and utterly reject this approach and think instructors teaching this are a danger to the public.

Let us analyze this, shall we?

Watching some of these choreographed promotional videos we see the following:

The defender has the time and space to see the attack clearly.

The defender is able to "jump over" the arm of the attacker, thus we assume they must be at least of similar height.

The defender locks the arm of the attacker and continues with his knee kicks and take down.

One guy writes "the premise of weapons defense in Krav is RCAT (redirect, control, attack & take away)". Really? I have been training for decades in Israel and have never heard this. and yet it is stated like "gospel". No offense to the person who wrote this, he is just repeating what he has been taught, (my point) but who said this is true? What makes this true? In many cases the "A - Attack" is a deadly mistake, but that is a topic for another blog.

Let us analyze this.

There was an attack caught on film on Friday, this was a real attack, not a demonstration, it took place in the Old City of Jerusalem. For those who study such footage it is clear that the Arm Wrap Around would never work.

The Arab attacker ran in full speed attacking the Jew from the side.

1. The attacker is generally caught totally by surprise. This idea of running towards the attacker, preempting his strike, well, I don't see that happening, ever.

2. The Wrap Around does not actually block the stick attack, (or knife attack), as the guy writes "redirect", but redirecting takes skill, it takes timing and it takes anticipation of the attack, NONE of those exist in most real life situations, as we saw with the attack on Friday.

3. If the attacker is stronger or taller than the defender the idea of rising up and "jumping over" the arm is just not realistic. In most likelihood while the defender is reaching and trying to control the knife-arm (or stick-arm) he/she is being stabbed (or beaten) repeatedly and losing blood.

4. The Arm Wrap Around requires perfect timing, as the guy admits, there is no block, so if you don't do it perfectly you will get hit in the head, or stabbed in the neck. This is not a good thing.

6. Watching this demonstration video slowly and pausing it at certain points it is clear that the attacker can pull his stick out while the attempted Wrap Around is in process.

7. Another CRUCIAL problem with this defense is - it is designed for only when the stick attack happens exactly this way. i.e. the attacker comes with a very WIDE attack so it is easy to go in and do this wrap around (at least in class) but in reality you do NOT KNOW that it will be like this. I often demonstrate that I can walk up to you with a stick and you will not know what angle I am going to attack at, even one split second before the attack! i.e. I can swing it directly over your head (not the classic Krav Maga attack which comes at a very wide angle). So if you are prepared with this Arm Wrap Around Defense, it will be totally inappropriate if the guy does not comply with your expectations. i.e. one of the Great mistakes of most Krav Maga systems is they begin from a conclusion, i.e. they begin with the full knowledge of the nature of the attack, but this is a total falsehood. They teach as follows: Let us take a specific attack and train for that. But the problem is you only know what specific attack After the fact, but not before. (think about that).

In our style we do not say...Defense vs Knife Attack, we say, Defense vs Attack because you will not know what kind of an attack it is until after the attack if you are among the lucky ones to survive).

My observations are based on decades of training full contact and of countless conversations with those who were victims of such attacks.

Thus I reject this classic technique out and out.

You will be surprised,

You will not anticipate the attack.

You will be overwhelmed.

You will be overpowered.

You need to work only on the most basic instinctive defense which is a block. The block must be your first move.

You most likely will have no time to move forward or back.

If the attack is with a knife and your Wrap Around does not succeed at once in securing his arm iron clad, you are actually redirecting his knife to a position to stab you in vital areas. i.e. you will most likely be dead.

Without going into detail about our technique, it is totally different in approach mindset, and execution. We live in reality. What looks good in a choreographed video may not work as well when a violent attacker runs towards you with the intent to kill. 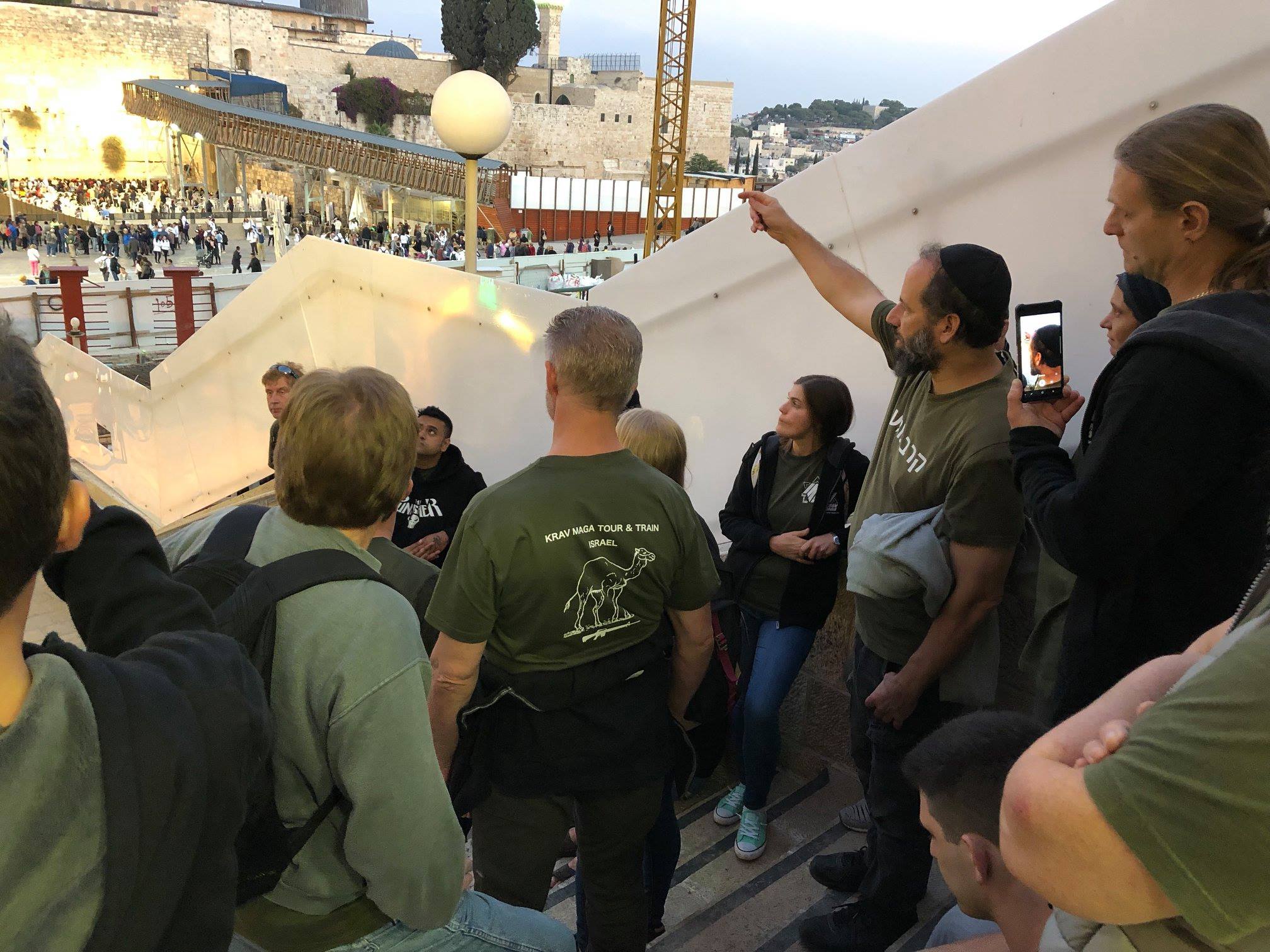 The author leading groups around the Old City of Jerusalem. Just the other day there was a double stabbing attack. We live here, we learn to be careful. We learn what works, We learn what does not work. 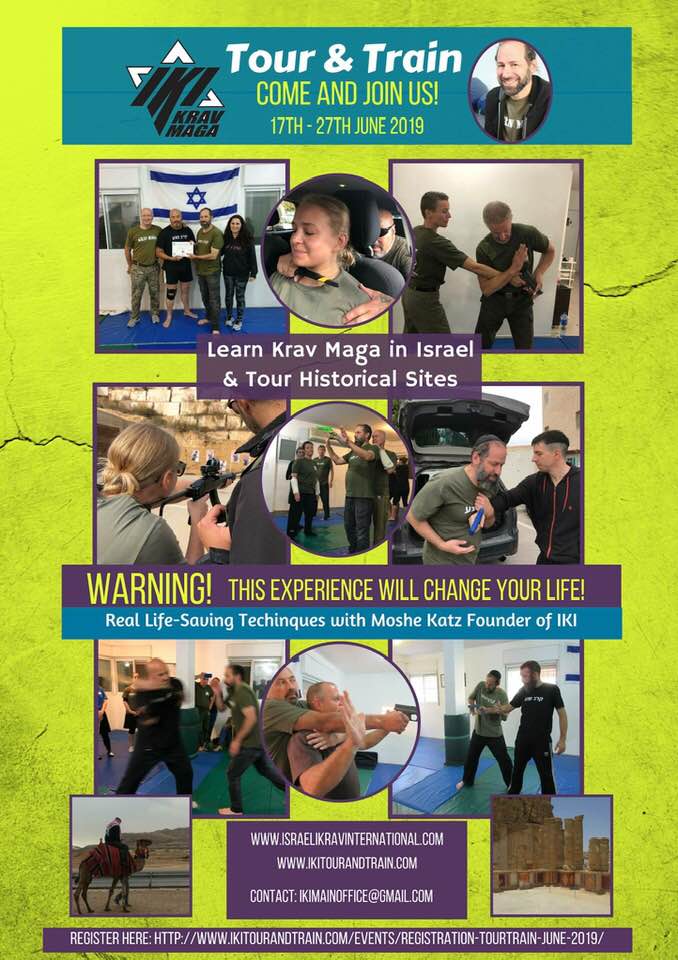