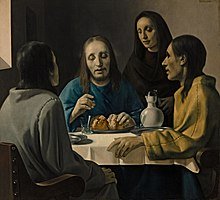 The famous brilliant forgery, The Supper at Emmaus 1937

It seems like yesterday that my dear Uncle Seymour proudly showed me his art collection. It consisted of works by Yakov Agam and other modern artists as well as some antiques. His favorite area was Judaica. He showed me, with great delight, old sets of wine goblets and other religious articles, he told me what joy it gave him to make the blessings with such antiques knowing that over 100 years ago some Jew in Germany or Austria was using these very same pieces for his own blessings. Clearly these silver pieces were the pride and joy of some long gone European Jewish family.

But then he told me something startling. He stopped buying antiques and started buying modern pieces that he liked. His art dealer explained it to him; Mr. Katz, the market is flooded with forgeries, we have no real way of knowing is this object is an authentic 18th century piece or a very good work of forgery. Why not buy something modern where you know exactly who made it and where it comes from. Support the modern artists.

Turns out this was just the tip of the iceberg, the forgery iceberg. I have come to learn that forgery in the arts, both martial arts and the art of sculpture, painting and music, is rampant with forgeries. Very talented forgeries.

Let us take one famous case that made the headlines back in 1947 in Amsterdam, Holland. It began with a man named Han van Meegeren. As a young artist the art critics heavily criticized his works and put him down. He was determined to prove they were wrong. He was determined to prove his worth as an artist. He decided to forge painters by famous artists, among them Johannes Vermeer.  (1632 - 1675, Holland). Vermeer was unsuccessful in his life and died poor and in debt. It was not until the 19th century, a couple of hundred of years after his death. Van Meegeren did not want to wait until after his death to make it big. He was determined to be a success. So he made a forgery of a Vermeer, different paintings but same style. Long story short everyone believed it was authentic, even the greatest experts. He fooled them all and made millions of dollars from these forgeries.

Eventually he was forced to tell the truth, why? One of his clients during the war was none other than the famed Nazi Hermann Goring, he too was fooled and purchased a "Vermeer" painted by Meegeren. The trouble for Meegeren began after the war.  Meegeren was put on trial as a war criminal having done business with the Nazis and have smuggled Dutch national treasures out of Holland during the war. Meegeren defended himself: I did no such thing! Those were not Dutch national treasures, those were my own paintings, I painted them myself and made them look like old style paintings, they are all forgeries!

No one believed him. The forgeries were too good, he painted himself into a corner, pun intended. So what did he do? He came up with a brilliant defense; he would paint a new forgery, a new Vermeer, right there, in court, in front of their eyes. It took several weeks but he did it, they were astounded, and he was acquitted. He was convicted for forgery, of which he confessed, and sentenced to one year in prison. He did not sit a single day. The day he was meant to go into prison he died of a heart attack. He beat the system.

But there is something he said during the trial that is the point of this blog, something brilliant.

He said, yesterday my paintings were worth millions of Guilders (perhaps the equivalent of $5 million today) and people would line up just to look at them. But today they are worthless and no one will cross the street to view them for free. And yet, the paintings are exactly the same!

Wow, this man hit upon a great truth, and a great shallowness of mankind, to our everlasting shame.

When Johannes Vermeer was alive his paintings were worthless and remained so for a few hundred years, and then suddenly they became the greatest paintings and a national treasure. And then another artist, Han van Meegeren duplicated his works and created new Vermeer's, and as long as people thought they were the originals they were popular, but once the truth had been discovered, the very same paintings were discarded. How shallow man is. As he said, they are the same paintings they were yesterday.

Let us how look at another well know forger, only he is not known as a forger but as a great artist, one of the greatest of all time. He is non other than Michelangelo.

Michelangelo was an Italian sculptor, painter, architect and poet of the period known as the High Renaissance. He was born in the Republic of Florence. (today Italy). His work and style exerted an unparalleled influence on the developed of Western art and he, along with Leonardo da Vinci, are considered the classic Renaissance Men. What few know is that he began his career as a forger.

Yes, Michelangelo too was unappreciated and was a starving struggling artist desperate to make some cash. The year was 1496 and all his talent did not pay for his food and basic needs. He needed to find a way to make some quick money. After all not everyone has the patience to wait until they are dead and buried for 250 years!

At the time there was a great interest in ancient Roman sculptures. Young Michelangelo was actually studying these and ...rumor has it that in several cases he kept the original Roman art which he was using to study with, and "gave back" his original work, i.e forgeries, or copies of the original. His work was so good that no one knew the difference. The irony is that today there are people who own these works, Michelangelo originals but do not know it. So they have sculptures valued at 10,000's of Euro's whereas their "true" value is in the millions of Euros, they are in the possession of Michelangelo originals from his early period. And today, there is no way whatsoever to figure this out. The irony; it is not the object but the perception of the object that gives it "value", how sad.

As my Uncle Seymour was advised; if you find it of beauty, buy it!

Back to 1496, Florence, Michelangelo caught a lucky break; he was discovered. One of his sculptures was sold a cardinal (not one of the St, Louis Cardinals baseball players but a religious lead of the Catholic church), a man by the name of Cardinal Raffaele Riario.  Riario eventually realized he was duped, and he demanded his money back from the dealer, but he wanted to meet the artist. He was so impressed with Michelangelo that he invited him to Rome and hired him to paint the Sistine chapel, the rest is history.

Today you would be quite fortunate and posses a large fortune if you possessed one of Michelangelo's forgeries.

This is all very interesting but what does it have to do with Krav Maga? Quite simply we live in a world of falsehood. Beauty does not matter, only perception. When the patrons of the arts thought it was a Vermeer they loved it, when they realized it was a new piece of art, they rejected it, although it was the very same work of art. Art has no intrinsic value, it is simply a piece of stone, or a canvas with color on it. All that matters is the value that you assign it. I have a work of art hanging in my home, it is a puzzle but it has value to me because my student Eitan made it for me when he earned his black belt after years of training, the special meaning is know to us.

Krav Maga however is different. It is not a matter or personal like or dislike, it is not a matter of I like chocolate and you like vanilla, no, not at all. That is why I never endorse other styles or systems. I believe in what I teach. Krav Maga has to work, it must be effective on the street. So it does not matter if it was developed by Michelangelo or by Vermeer or by Katz, it must work for you, now and today! There is an absolute value to it. It must be an objective truth, not a subjective truth.

Art, beauty is in the eye of the beholder, Self-Defense must work! We can never allow martial arts forgery on our market.

Enjoyed the blog? Perhaps buy one of our blog collections in book form?