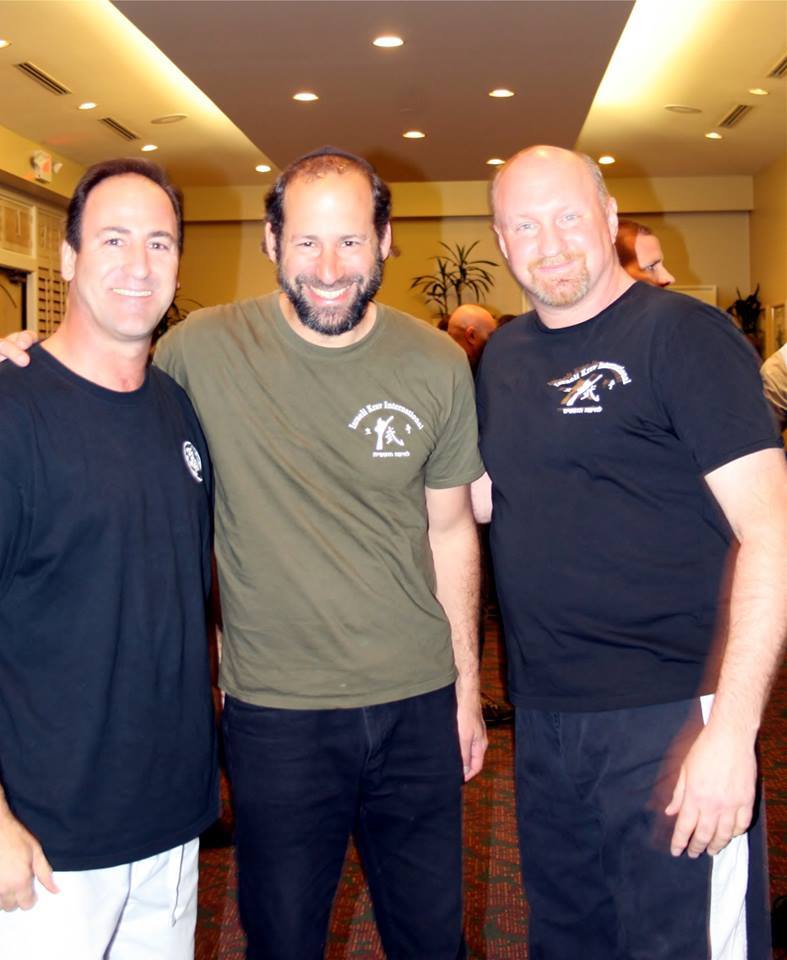 With IKI black belt instructors, and grand masters in their own right, Joe Cayer and John Liptak.

I do not like the current image of Krav Maga in the world today and neither do many of our instructors. Back in Florida IKI black belt instructor John Liptak pointed out to me that in America these days Krav Maga has a black eye.

And to think that the original goal was to save lives.

Today just go to YouTube or Facebook and most of what you will see is sex and violence, flash and trash.  You will see scantily clad women, mucho guys with big muscles and fancy moves that mimic the nonsense we see on the big screen. There is little concern for the "little guy"; the guy who really needs to defend himself.

On Facebook I will often see proud photos of people after seminars. They proudly show their bruises and talk about how they "survived the boot camp or seminar". Great but what does this have to do with real self-defense.

When we hear the term "Reality Self-Defense" what comes to mind?

What comes to mind is "really though hard core" training. But that is not true. We at IKI teach reality self-defense, we teach you that in reality you will be tired, confused, scared and not stressed for the occasion. We teach that you will be caught by surprise. We teach you to deal with the surprise.

Doing 100 push ups and running a few miles is great but has nothing to do with reality self-defense training. It has everything to do with the false, non-Israeli, image of Tough guy Krav Maga.

This is sold all over the world as Israeli, but here in Israel no one is fooled by this. Our real heroes are skinny guys with skinny arms but with the heart of a lion, the lion of Judea.

Sometimes during a class I will take a few minutes to talk about awareness. I know that for some this is a waste of time, or so they believe. For them a Krav Maga class should be filled with aerobic work, hitting the bag and sweating a lot. But I take the time to talk because my words can, and have, saved many lives.

Awareness. If you do not know how to read and understand your environment you are in great danger.

The other day there was another tragedy in Israel, a young man was shot to death by Arabs (who some mistakenly refer to as Palestinians). His death might have been prevented if he had studied reality Krav Maga, i.e. being aware of his surroundings.

In fact two of our students, members of our Tour and Train program, were also in that very same area, on the same day. They however noticed the danger and took precautions.

Reading the report about the recent tragic killing I see the following.

Gonen was murdered by a Palestinian (sic) terrorist as he and a friend were finishing a hike to Ein Buvin spring near Dolev. The Palestinian (sic) was standing at the side of the road and waved them down, apparently asking for help.

As soon as the Israelis' car pulled up he asked them for water, and then shot them at point-blank range and fled the scene.

This behavior on the part of the victims violates the basic principles of reality self-defense.

If someone knocks on the door, and you do not know them - do not let them in.

If someone asks you to come to the forest to help them find their lost puppy - you do not go.

If someone stands on the side of the road and "waves you down" or asks for help - call the police, but do not stop for them.

Sometimes you have to block your feelings of compassion. Yes, perhaps these are really good people in need, so call the nearest police and inform them. However in this day and age, and in this region you cannot afford to be that soft.

One young man paid for his kindness with his life.

We are here to save lives!