The above three styles of martial arts have several things in common and, many differences.

All three are relatively new on the world scene.

BJJ- Although Brazilian Jujitsu has been developing in the small Gracie Jujitsu circles in Brazil for some time now, it was totally unknown outside of these areas until Royce Gracie exploded on the scene with his UFC victories starting in 1993. Since then BJJ has spread like wildfire. Today it is an integral part of MMA. 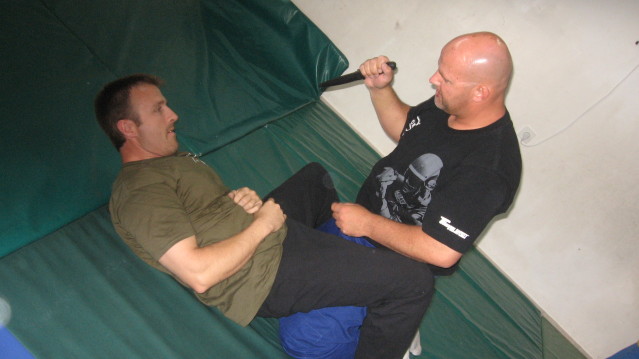 BJJ and Krav Maga combined for effective street self defense, Robert and Greg of Indiana training in Israel during Tour and Train program.

MMA – Mixed Martial Arts, is closely related to BJJ. When BJJ fighters were submitting and defeating all other fighters such as Karate men, kung fu guys, judo practitioners, TKD etc, fighters realized that they need these grappling skills. With some basic grappling skills they were now able to use their striking skills more effectively and knocked out BJJ guys. Quickly the obvious conclusion was reached that a combination of different martial arts, as advocated by Bruce Lee decades earlier, is the most effective. Thus was born MMA; striking, grappling, takedowns, submissions, Thai Kicks etc.

Krav Maga – Krav Maga began in a basic form sometime during the 1930's but only during the past twenty years or so has it become known outside of Israel. Today it is used by law enforcement and civilians all over the world.

All three styles broke with tradition in certain ways, broke new ground and challenged existing ideas and concepts. All three are cutting edge.

MMA and BJJ are sports, Krav Maga is survival training.

MMA and BJJ are amazing, powerful, and exciting sports but no one will tell you that they are designed for self defense. Even at Karate College when I spoke to some of my friends/instructors, asking them about certain techniques, they answered me that what they are teaching is a sport. That was the answer, pure and simple.

When I would question certain applications of these submissions the answer always was "This is part of the strategy, the game, it is a set up for an arm bar, this is not real life self defense."

The strategy towards victory often was rather complicated and involved many intricate details. The fight was not designed to be over in 5 - 10 seconds.

With IKI Krav Maga I take my experience from BJJ and MMA and combine it with the Krav Maga approach. I adapt the best of BJJ and MMA to the concepts of Krav Maga.

Some points of Importance

BJJ and MMA are sports – You are a top athlete at the peak of your career. You are prepared for a fight; you know a fight is going to take place. You know who your opponent is. Odds are you have seen much footage of him. You are prepared, rested, and ready to go.

One on One or Multiple Attackers - As far as I know all the UFC matches, K-1 etc are always one on one. In the street you cannot count on this. You might be attacked by a gang or it might start out as a single attacker but others quickly join in. Can you imagine grappling with a guy and then suddenly you feel a swift kick to the ribs or a bottle smashing over your head? What was that? It was his friend. Does that change the "game", yes indeed it does. Krav Maga plays by the rules of the street; there are no rules, there are no time outs, there is no white towel, no ref, and no judge. This changes everything my friends.

Weapons - It is highly unlikely that in a UFC match a fighter will pull out a knife while grappling. In a street fight this is not only possible it is highly probable. Most people who get killed in bar fights die from stab wounds. Tempers get heated, a fight breaks out and someone pulls out a knife, when you least expect it. This can, and does, happen on the ground as well. I feel that not only do BJJ and MMA ignore these street realities but they condition us to think otherwise. We are trained to look for a leg lock, an arm bar, but not a gun or a knife, or another guy with a crow bar or steel toed boots. See the problem?

Surface – I see MMA fighters always training for takedowns. I see them going through their solo drills as they go down on one knee. Can you imagine the impact on your knee if you did that on concrete? Ouch! You don't need an opponent; you just crushed your knee all by yourself. Similarly there are many BJJ techniques that involve using the matt. On the street there may be nails, rocks, even a pebble can make most ground techniques very painful to do. Can you imagine "rolling" around on the matt when that "matt" is actually the pavement. Can you imagine doing all your transitions and flips on hard concrete? Again, wake up call, life is not a sport.

Simplicity - My students and I love the intricate details and locks of grappling and submission wrestling but man does it take a great memory! There are so many techniques to learn (which makes it fun and interesting to learn and to teach). I find that unless I train on a daily basis I tend to forget so many of the details and only remember the basics. So I wonder, if I had to use this in real life situations, how much would I be able to use effectively. How well would this training serve me if my life were on the line?

Krav Maga, on the other hand, is based on simplicity, when I adapt BJJ to KM I take only the basics of those styles, the parts that are "Easy to learn, easy to apply in many situations, and easy to remember". This might be less fun, less challenging in certain ways, but I feel that for a real life encounter it is far more effective.

I also keep in mind that many of my KM students are not full time martial artists; they do not have the time to master the many intricate details of the grappling game. The simple gross motor moves of KM, however, they can and do remember. And they have used them in real life situations, effectively. .

For all these reasons it is important to separate sport from survival training and reality from fantasy. For sport and competition I like MMA and BJJ. For real life self defense I choose Krav Maga.