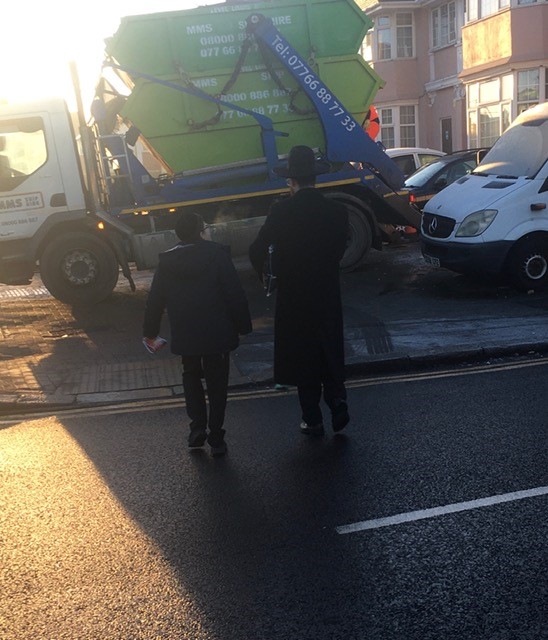 Father and son, Jews in Golders Green, London, England. Their clothing and beards immediately distinguish them as different, as "others".

I am in London, England, the "United" Kingdom. I am observing life here. I am staying in a neighborhood which is inhabited by many very traditional Jews who cling tenaciously to the ways of the fathers. The observant Jew can find here anything the needs; a place to pray, a place to eat, his traditional clothing, a place he can feel safe. But as soon as he leaves this warm bubble, he adapts and learns to become invisible, as much as possible. It is not good to be different. It is not good to be noticed.

The synagogue I have been praying in cannot be detected from the outside. Unlike the USA or Israel there is no large sign or anything at all to indicate the status of the building; those who know, know. Others, best that they do not know. Everything is kept low key.

Outside the neighborhood every attempt is made to look as "normal" as possible, not to arouse hostility. In the age of multi-culturalism, in the age of every bizarre fashion or life style is acceptable, it is still dangerous to be a Jew.

The Jews of England, in fact of nearly all of Europe, have experienced two thousands years of persecution and discrimination. Even a fairly knowledge person would be shocked to study the actual history and discover the true facts. How difficult was it for a Jew to live in certain areas. How it was "normal" to exclude Jews from every facet of public life and business, or at best, to allow only a "tolerable" number of Jews in any city. There was a time when no Jews were allowed in all of England. There was a time when the quote for London was five Jews.

Today things are different, they are infinitely better for the Jews, and thus, infinitely better for everyone. A Jewish neighborhood is a safe neighborhood. A Jewish presence means success for all. I recall having coffee in Germany when a German man approached me, eager to speak. He expressed that Germany needs a community of half a million Jews. This, he felt, would be a great benefit to Germany.

But my point here is not the Jews, or the Gypsies, or the homosexuals, or the Albinos, or the what-have-you. It is everyone. For where one man is not safe, no one is really safe. Where one person cannot express who he is, then how free is anyone?

We have come a long way but most people do not know how many people live in constant fear. An entire community knows it must always keep a Low Profile, lest it awaken the forces of Evil and Hatred. And this is true for many groups, we just don't know about them because we are not aware of them.

Alan Turin helped break the Nazi code, but he was severely punished for his sexual orientation. Brian Epstein did not save the world but he did bring us the Beatles with a message of hope and love, and he too suffered from bullying and depression, eventually overdosing on tranquillizers.

The streets are filled with all the lonely people; the weirdoes, the colorful, the different, the misfits. And some people are just out looking for a drink and a fight, and you might be their choice of target.

So yes, this is a reminder that we all need to be prepared. We all need self-defense training. The day of peace has not yet arrived so the day of preparation must begin.

Two Orthodox Jews were standing on the street, one was on the phone, when a man walks up to them and begins viciously punching them and beating them. Sadly these Jews had no clue how to defend themselves.