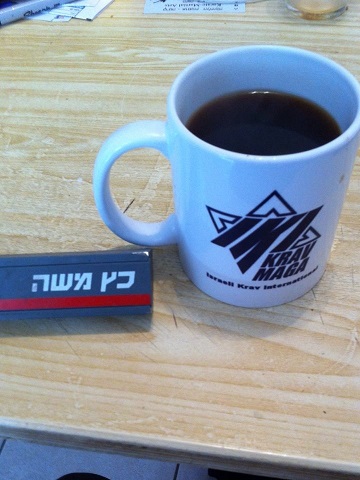 There are certain lessons we learn as children. Or rather I should say we are taught as children, but then we forget them, until someone posts a cute reminder on Facebook.

And there were other lessons;

Say your prayers before you go to sleep.
If you have nothing nice to say, say nothing.
Do not judge another until you stand in his place.
Give others the benefit of the doubt.

Yes, give others the benefit of the doubt. Damn that is a tough one!!

We see someone doing something "wrong" and we have this huge urge to rebuke them, here and NOW.

Later on it will turn out that we totally misunderstood the situation. Whoops! We made a huge error, we totally misjudged the person, but we have already publicly rebuked them. Oh well...

Last year we had a new student on Tour and Train. He did not have a Krav Maga background, that is fine, Tour and Train is open to all people regardless of background or previous experience in martial arts. But this fellow was a Kung Fu expert, had been to China, and was clearly highly skilled in his art.

And now he was trying out Krav Maga.

He was a quiet fellow, not very expressive.

I watched him during the training. He trained hard but did not say much. Some students let you know how they feel, "This is the greatest style I have ever seen! the techniques are amazing, IKI rocks!"

But others are quiet.

And then I noticed something else, a little off. This Kung Fu guy seemed to be doing his Kung Fu forms and exercises. He would go off on the side and do his forms, (kata, or martial arts forms, kanto in Chinese).

He came to learn Krav so why is he doing Kung?

It is written in Proverbs, "Teach the youth according to his own way. Even as he ages he shall not depart from the Way".

Teach him according to his way, not according to your way. No need to beat your students into submission, you are here to guide them, not dominate them.

I said nothing but wondered why he was doing his Kung Fu over here.

Weeks later I found out.

I overheard some of my students talking, "That guy who was here for Tour and Train, did you see what he did? He took Moshe's Krav Maga techniques and he made them into a Kata, that is he he learns, that is how he remembers techniques".

Wow. and I was wondering why he did not buy the DVDs.

That was his way of remembering techniques.

In fact, he had paid me the highest compliment. This master martial artist had taken my techniques and elevated them to the realm of traditional martial arts forms. He had placed me along with the Chinese masters. A teacher can ask for no more.

Here I had thought that he was doing his own thing instead of trying to learn my techniques, thank God my mother taught me to give the benefit of the doubt and keep my mouth shut.

Today he is an IKI Krav Maga instructor and I am very proud of him. And I have been reminded of a very valuable lesson, always give the benefit of the doubt, even in your own mind! Never assume you know what is truly going on with another person. Learn to let go, learn to forgive, learn to give the benefit of the doubt. The results will please you.

Over time I have come to know this person, a man of true virtue and character, integrity and honesty, old school, real values.

"Do not forget the lessons of your mother"  (Book of Proverbs)

To conform to an established standard or political programe.

There is some confusion between 'toe the line' and the frequently seen misspelling 'tow the line'. The 'tow' version is no doubt encouraged by the fact that ropes or cables on ships are often called lines and that 'tow lines' are commonplace nautical items.

The earlier meaning of 'to toe the line' was to position one's toes next to a marked line in order to be ready to start a race, or some other undertaking. In the 19th century, we wouldn't have been limited to lines when it came to placing our feet, but would have had a choice of what to toe - a mark, scratch, crack or trig [a line or small trench]. These were all then in use in 'toe the ...' phrases. The earliest version we know about is from The Diverting History of John Bull and Brother Jonathan, 1813, by 'Hector Bull-Us' - known to his family and friends as James Paulding:

"He began to think it was high time to toe the mark."

Pauling was using the figurative rather than literal meaning of the phrase, that is, to 'toe the mark' was to conform to a set standard.

Going back to the original, literal 'toeing' of a line; there are many circumstances where one might place one's toes up to a line - the start of a sporting event, standing in formation on parade, etc, etc. So, which is the source of the phrase?

One explanation that is often repeated is that the phrase derives from the British House of Commons. Arguments in the House are often heated. To deter members of opposing parties from attacking each other, two parallel red lines are marked, two sword-lengths apart, on the floor of the house. MPs are expected to stay behind these lines when a speech is in progress. Members, of course, no longer carry swords, but the tradition remains. Visitors to the House of Commons are very likely to hear this tale related by a tour guide. Counting against this supposed derivation is the fact that the current Commons Chamber dates from only 1950, when the building was rebuilt following WWII bomb damage. Paintings of earlier Commons chambers, from the times when members might actually have worn swords, show no such lines. The parliamentary link may be strengthened in some people's minds because of the 'toe the party line' usage, which relates to orthodoxy in politics.

Another possible source is prizefighting. The scratch was the line marked across the ring in early 'toe-to-toe' boxing bouts. Anyone man enough to enter into such a contest was 'up to scratch' (see also: start from scratch). This version of the phrase was known in the USA by the early 19th century, for example, this piece from the Gettysburg newspaper The Peoples Press, from October 1835, in which the public was invited to put up or shut up in a wager about an election:

Other early examples of 'toe the ...' have a nautical connection. In the 19th century, sailors were expected to prepare themselves for group punishment by standing in formation on deck and 'toeing the line' between boards - also called 'toeing the crack'. This usage is the earliest that I've found for 'toe the line' in print - from The Edinburgh Literary Journal, January - June 1831:

"The matter, therefore, necessarily became rather serious; and the whole gang of us being sent for on the quarter-deck, we were ranged in a line, each with his toes at the edge of a plank, according to the orthodox fashion of these gregarious scoldings, technically called toe-the-line matches."

Which is the source? Well, no one knows. What is for certain - it is toe, not tow.