HI Tech merged with low Tech taught us here in Israel something amazing.

A small, seemingly unremarkable burned parchment fragment found 45 years ago during excavations on the western shore of the Dead Sea has emerged after hi-tech sequencing as part of the Book of Leviticus from a 1,500-year-old Torah scroll. (The Jerusalem Post, July 21, 2015)

At Ein Gedi, עֵין גֶּדִי  not far from where I live, a parchment was found inside the holy ark, (where we keep our Torah scrolls). Now we know it was the remains of the third of the five books of Moses.

We know about the town of Ein Gedi since Biblical days, The Song of Songs speaks of the "vineyards of En Gedi" and today again a Jewish community lives there. We always stop off at the Ein Gedi spa for lunch during our Tour and Train sessions.

According to Dr. Sefi Porath, Ein Gedi – a Jewish village in the Byzantine period during the 4th-7th centuries CE – was once a prosperous community that housed a synagogue featuring a mosaic floor and ark.

“The settlement was completely burned to the ground, and none of its inhabitants ever returned to reside there again, or to pick through the ruins in order to salvage valuable property,” he explained. “In the archeological excavations of the burnt synagogue, in addition to the charred scroll fragments, we found a bronze seven-branched menorah, the community’s money box containing 3,500 coins, glass and ceramic oil lamps, and vessels that held perfume.”

The cause of the fire is officially "unknown" but logical speculation tells us that the likely cause of destruction ranges from Bedouin raiders coming from east of the Dead Sea, to conflicts with the Byzantine government.

Either way we see here an ancient Jewish community destroyed by either Arabs or Christians. Is there anything new? Has anything changed?

For the archeologists this is a very exciting find, as it is for all of us,

The burnt relic is the most ancient scroll from the five books of Moses to be found since the Dead Sea scrolls, most of which are ascribed to the end of the Second Temple period, he said. 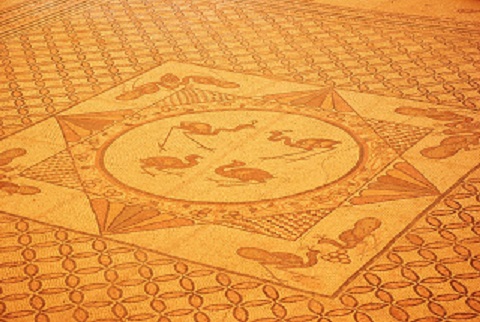 Mosaic floor, from the synagogue at Ein Gedi

Even the history that only now is coming out, the one being deciphered by Hi Tech along with archeology, reveals a tragic event; a beautiful community burnt to the ground, synagogue and holy books burnt, and the heart cries out how long?

So we fight back, and no, I see no need to apologize, not to anyone. As we speak my book is being edited, it is called, "Israel, A Nation of Warriors" and I am told it is "controversial", that it may "offend some people", that I should expect some harsh reactions.  Read my lips, I don't care!

For those whose holy ark was burnt to the ground 1,500 years ago in Ein Gedi, and for those who were murdered in the Farhud of the Muslim countries, and for those murdered by the Crusaders in the Christian countries, and for David and Bella Bielski murdered in Belarus by the Nazis and their helpers, for my great grandfathers' ten siblings and elderly mother who were sent to Auschwitz and never came back, for all of them I say, enough, we fight back.

But what else does it tell us?

Jewish history, a glorious history but one filled with sadness. I have history books of the Jews from every land, and other than the book about the Jews of China, they all end in tragedy. The Chinese Jews succumbed to assimilation and natural disasters, the American Jews suffered more antisemitism than anyone today cares to admit or discuss, the Jews of all the other lands ended up either having their throats slit, shot in ravines or gassed.

Today the Jews of France are fleeing. The Arab world is nearly devoid of Jewish communities. Even the handful of Jews left in Yemen are in grave danger.

So here we find a fascinating archeological find that teaches us about a Jewish community here in our own land, the land of Israel, that was burnt, destroyed, the survivors fled and never even return to collect the money that was in the synagogue treasury.

What shall we say and what can be spoken?

Our hearts break to see the young ones go to war. Even today a young boy of 18, another Moshe, a student of mine who I had Shabbat dinner with just two weeks, is now enlisting, and now his mother shares the panic of all Israeli mothers. (OK, not "all", all except the various shameless draft dodgers) but what choice do we have?

I do not want some archeologist 1,500 years from now to find, Heaven-forbid, the charred remains of our community. No, and therefore we fight back, as a nation, and as a community. We fight back not because we love fighting but because we wish to survive. And that my friends, is the crux of this "conflict"; they want us dead and we choose life.

And so we fight on, for as long as it takes, there is no end in sight. Peace is an illusion.

And may we achieve the Biblical words of "and the land rested for forty years."

I would be happy with forty years of quiet.

Soon in paper back and "smashwords" and ITunes

What makes Israel Unique? Analysis of the Reserve system, history of a warrior nation from Biblical times to our own IDF.