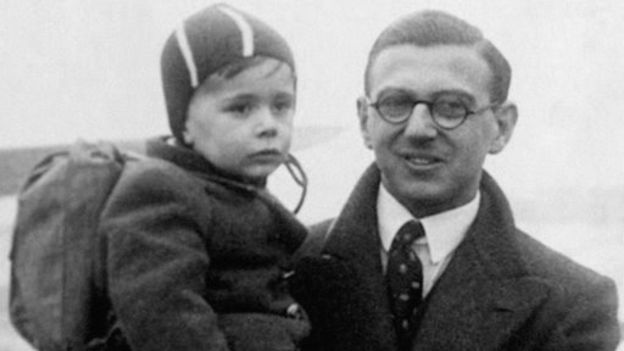 Sir Nicholas Winton in 1939 with one of "his" children, Prague.

"Who is wise?" the rabbis ask. "He who can learn from every human being".

But who is foolish, we might ask, he who refuses to see reality.

The year is 1939, the world is about to embark on the darkest period of its history and yet nearly all are blind. Ze'ev Vladimir Jabotinsky is traveling throughout Europe warning the Jews that disaster is imminent. And a British Jew by the name of Nicholas Winton, converted by his parents to Christianity, sees the threat just as clearly.

He embarks on a private initiative to save children, mostly Jewish, from Czechoslovakia. Ultimately he succeeds is rescuing 669. He could have saved many more but only Britain and Sweden were wiling to take in these children.

Winton wrote to Franklin Delano Roosevelt, president of the United States of America and received a polite reply that "Current legislation would not permit the U.S. to help."

Another issue was crossing through the Netherlands as the children were to embark on the ferry at Hoek van Holland. However the Dutch government officially closed its borders to any Jewish refugees. The border guards, searched for them and returned any found to Germany, despite the horrors of Kristallnacht being well known.

The British were willing to help but were acting way too slowly. They did not feel the issue was pressing. And so Winton, rather than waiting for official documents, simply printed up his own. He was a man with initiative.

He was also a man who could sense that time was running out and the catastrophe was about to unfold.

Matej Mináč asked Sir Winton, "Why didn't anyone, not even government officials, believe that danger was imminent? (The Lottery of Life, page 85)

"It is much more convenient not to believe. Then you can just sit back and do nothing."  He explained that that suits most people just fine.

"I don't think we've learned anything… the world today is in a more dangerous situation than it has ever been."

I look at the world, I look at my own neighborhood and I see we are surrounded by enemies who seek our deaths. And yet these good people do not attend Krav Maga classes. They do not learn to defend themselves against knife attacks while all over the country people just like themselves are being attacked and killed. I look at the world and I see it is sleeping and I remember Sir Winton's words, "It is much more convenient not to believe. Then you can just sit back and do nothing."

"Who is wise?" Ask the rabbis, "He who can learn from every man."

"Who is wise?" Ask the rabbis, "He who can see that which is not yet born."

Are we wise, or are we foolish?

Sir Nicholas Winton, we remember you, for your courage, for your bravery, for your kind heart, for your audacity and fearlessness and for your wisdom.