This journey begins in Jerusalem, a home for the aged, a older gentleman telling his life story. He was born to immigrant Jewish parents in London's notorious East End. Today he resides in a comfortable home for the retired, he has had a long, interesting and productive life which includes traumatizing nights in London bomb shelters during the German blitz of World War 2. As he says, I have seen enough violence in my lifetime, I have no interest in seeing any more.

He speaks a perfect British English, Hebrew, and is still fluent in language of his youth, Yiddish. When I told him I was about to visit England he shared some of his childhood memories with me. And it all began as a child of immigrants in the East End.

The East End, the area notorious for its deep poverty, overcrowding and its legendary crime. Today, for the most part, it looks very different, but the aura remains...

My interest in History, Jews, and Crime leads me to the East End, as it contains all the elements I am looking for. Today only the memories remain as for the most part the area looks very respectable, rejuvenated with successful businesses and trendy vegan restaurants.

I am told that pottery was found with a Menora, the Jewish candelabra, dating to the 4th century. So we have some roots here. Today the Jews of London have moved west and north. London is the strongest Jewish community in all of Europe, and the heir to a thousand plus year tradition in Europe. This morning in the synagogue the language I heard most often was not English or Hebrew but the European dialect of Germanic Hebrew; Yiddish.

The East End has always attracted poor immigrants; once it was persecuted French Protestants, another time it was Ashkenazi Jews, and today it is the Bangladesh people. Traditionally The East End has contained some of London's poorest and most violent areas. Similar to New York's' lower East Side there was a great deal of unskilled labor, particularly in the field of tanning, textile, and all sorts of piecework where laborers were paid by unit of work. My friend in Jerusalem tells me that his father worked in textile shops, each Friday he quit his job as he refused to work on the Sabbath. Sunday morning he would look for a new job. He worked all day, every day, and on Shabbat he rested and studied. These values he taught to all his children who follow this way to our own times.

The immigrants worked very hard. They took any job and worked any hours, just to survive. It is said that the area attracted the most noxious industries as the people would not complain of the terrible noise and foul smell produced by these industries. Much of life was unregulated and beyond the control of the officials. The docks also provided opportunity for low paid unskilled labor.

The area over the centuries became notorious for its crime; the legend of Jack the Ripper (1888) and of course the gangs of the 1960's including the infamous Kray twins.

When the Kray Twins and their gang ruled the East End, as they say, they were untouchable. They ruled with Fear.

Fear was the currency with which business was conducted. Gradually their name, and the Fear associated with it, made it possible to build a "legitimate, respectable" business and recognition by main stream celebrities and politicians. As they say, they had City Hall and the police, in their pocket. Crime ruled the city with official recognition. 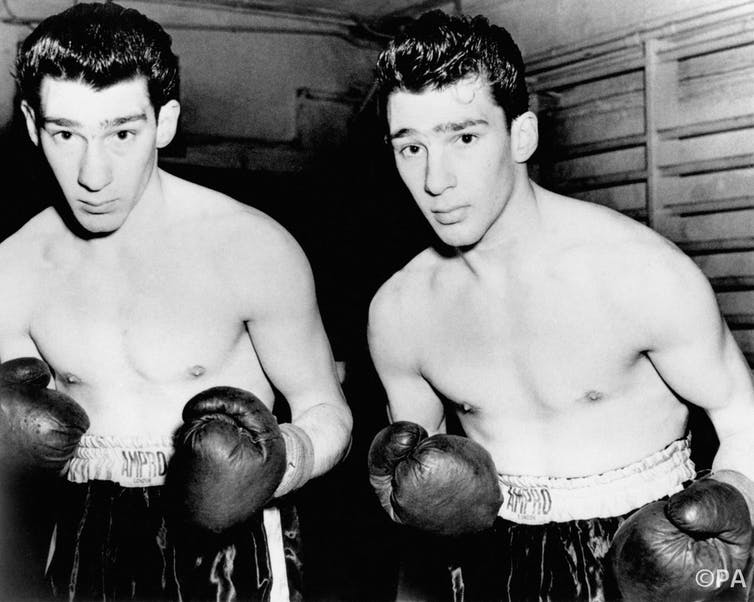 The Kray Twins, in their early years.

The Kray Twins began their career with illegal boxing. This helped establish their reputation as fearless and dangerous. They gradually encompassed nearly all aspects of crime. Their end came with some very public murders and help from an American informant. For years no local was willing to testify against them, even if a murder was committed in public in broad day light.

And now to the point of all this meandering down memory lane. The first time a person backs away from a challenge, in fear, the first time a thug, criminal, gangster, gets his way because others are afraid of standing up them, this is the beginning of the decline of society. We need to learn to stand up. As they say, here and in New York; if you see something, say something. If you notice something suspicious, stand up  and report it. But we wish to go further, we wish to create a cadre of individuals who are willing to act, who are not afraid.

We wish to create individuals who can stand up and defend themselves. Every time one person runs away, a future gangster is empowered. There is a time to run and a time to stand up and fight. There are times when we have to take a stand, for the sake of the future of our communities. The East End did not become a crime zone in one day, and it took years of collective organized effort to change it to what it has become today.

We all want a society where we can walk around freely but we must understand that freedom is never free.

Today I enjoyed a lovely visit to London, while I always keep my eyes and ears open, I felt safe. But I know that this has not always been the situation and that if one feels safe it is only because others have worked very hard to create that safety. We need to be part of that effort; to create safety and to protect and preserve it.

So why wait? the time is now.