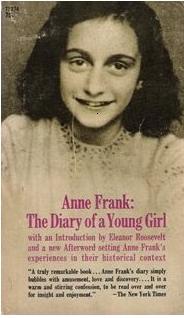 Anne Frank is perhaps the most well known "Holocaust" or Shoah victim of all time.

1. Because she wrote a diary which her father published,

2. She is an easy figure for people to identify with. She was a young girl without any record of activism, no known political or religious opinions, nothing at all controversial.

She would have made a great candidate for president.

And, she was killed young and innocent. As such she is admired all over the world. Her book is read by hundreds of thousands of people in over 100 languages. Her home, her hiding place, is one of the most frequented places in all of Europe.

Her book is called, "Diary of a Young Girl". I do not like the title at all.

I do not like it because it is going the direction of much of the teenage Holocaust literature. It is being marketed as the tragedy of a "young girl".

By focusing on the "young girl" part the world is minimizing the Jewish tragedy and making it "universal".

It was not universal. Many other people suffered during the Shoah but only the Jews were marked for total annihilation, genocide. In no way is this meant to minimize the great suffering of others, which was indeed tragic.

There was a movie called "The Boy in the Stripped Pajamas", it was a story about a Jewish boy and a German boy. I happened to see this book in South Africa, in a local elementary school. To my shock and dismay the Jewish aspect of the story, which was the central aspect, was deleted.

I was told that the school felt that the Jewish aspect might make the story less appealing to some readers.

By removing the Jewish aspect they have negated the entire lesson and purpose of the story. The same is true of Anne Frank.

By making it "universal" and taking out the "uncomfortable" mention of Jews, one is totally negating the message of the story, of the events, of the message that should be learned.

It is not, "how unfortunate that this young girl died", but the need to understand the great hatred towards the Jewish people and the need to guard against all hatred against any group.

It is important for the world to finally get that.