Economy of Motion,
Learning Efficiency, and Ease of Application

Recently I was comparing some of the IKI Krav Maga Techniques to other martial arts and Krav Maga organizations. I have tons and tons of books and references I often use to research, study, and compare.  I started by thinking back to some of the kata or memorized sequence of techniques I had previously learned.

In Krav Maga I find that I often use various techniques from my previous martial arts practice such as a kata or forms.  Sometimes I am able understand more clearly why the martial artist that developed the kata performed the technique a certain way. Of course, I can no longer ask the original masters of the kata why they performed a technique on Okinawa or in China hundreds of years ago in a totally different time, place, and situation. With IKI Krav Maga I can ask questions and get immediate, modern, relevant feedback.

I learned 100’s and 100’s of movements and techniques in various prearranged sequences. I even learned all of the pressure point meridians, associated elements, and other aspects of Traditional Chinese Medicine in aims of improving my marital arts. I was always under the impression that the creators of these kata often only learned one kata. Yet, somehow modern emphasis is placed upon the number of techniques one could perform. Belt ranks require vast memorization of techniques. It is as though the more techniques someone can perform, the more advanced they feel they are as a martial artist.

Some very noted and commercialized organizations boast of the complexity and vastness of techniques making up the system. In one particular modern organization’s Ultimate Self-Defense Guide I found reference again to number of self defense techniques.  Personally, I have found that in real self-defense or combative situations, it is difficult to remember numerous complex techniques. Yet, here in the ultimate self-defense guide there is greater emphasis placed upon the number and complexity of techniques, rather than the simplicity and effectiveness of techniques. I would rather learn one technique that works effectively for a thousand situations than to learn a thousand techniques to prove my worth as a martial artist.

Regarding hand gun defense in other systems, I thought back to my training in the military police and previous martial arts training. There seem to be random gun defense techniques in much of my past training and other systems but little emphasis is placed upon gun defense systematically.  In the modern organizations ultimate self-defense guide I paid special attention to the hand gun defense. In the advanced section of the ultimate self-defense guide, it covered six scenarios including gun from the front not touching, to the side of head, to the side behind arm, to the side in front of arm, from the front pushing, and from behind touching.

Let’s look at the six scenarios for a moment. Regarding ultimate self-defense guide’s technique for the gun to the front, the defender grabbed the gun with one hand, drove the gun to the attacker’s hip, punched them in the face while holding the gun in place, and then stripped the gun away while grabbing the back of the gun. I had my wife and two daughters try this technique. They were unsuccessful and many bystanders would have gotten shot. I’ve even tried the technique with an air soft gun in real time where I was shot repeatedly trying the technique.

When using the IKI Krav Maga two hand grab technique my daughters and wife were able to take the gun from me. The IKI technique was much more effective for them. With the IKI technique they used two hands to control weapon versus my one hand. As a loving father and a husband I am concerned with the safety of my family. Often I use my 10 year old daughter, my 13 year old daughter, and my wife as my measuring stick to determine the effectiveness of a technique. My wife is pretty tough and so are my girls. I have seen them spar and roll with people much larger. However, they do not rely on strength, size, or weight for a technique to work. They rely on the technique itself.

At any rate, continuing with the gun to the side of the head, there was another technique performed in the ultimate guide in similar fashion to the above scenario. I found this technique and two other techniques seemed to rely on strength. Despite many attempts my daughters and wife could not perform the techniques effectively. Using IKI techniques they successfully removed the gun. Of the six scenarios the final two techniques seemed similar to IKI techniques. Principally they were OK to gain control of the weapon; however, the technique ended with an elbow to the face that sent me in the wrong direction and I actually pulled the gun away. I would have shot the person throwing the elbow.

Now, the application of the technique is not the only issue. The complete self defense guide only covered six scenarios. What about all the other variations and scenarios? Surely the ultimate guide would have an answer, yet it did not.

Surely it must require a vast number of techniques to handle all these situations. Rest assured, it does not require learning a large number of techniques. Nor does it take super strength or precise complex movements to defend against the vast majority of hand gun threats.

I have found there are six principle IKI hand gun techniques and movements that can be used against the vast majority of hand gun threats. The same can be said of other IKI Krav Maga techniques against knife threats, knife attacks, stick attacks, empty hand attacks, or whatever the case may be.  There is a common thread that flows from empty hand, to stick, to knife, to gun, and so on. Once you learn the principal techniques it all flows together.

Let’s take hand gun threats from the front as an example. The attacker may be pointing the gun with one hand or two hands. The gun may be at a distance, touching, or pushing. The gun may be pointing at the head, throat, neck, chest, shoulder, stomach, hip, or pelvis. There are dozens and dozens of possible threats; IKI handles them all with six key techniques and principles. 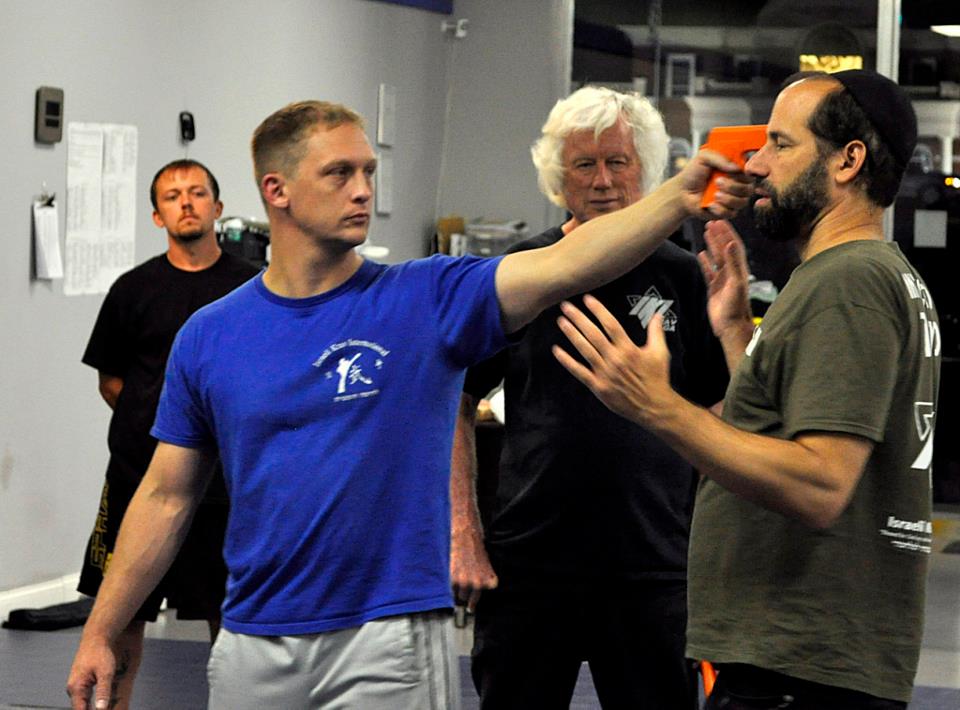 Tim Garrett training gun defenses with Moshe Katz, 2013. Tim continues training with Moshe on a regular basis to stay on top of all the latest developments in Israeli Krav Maga.
IKI Black Belt instructor Hal Herndon from Georgia looks on.

Of course, there may be slight differences and adaptations but once the principles are learned you will find yourself applying the techniques to various situations automatically. At a recent seminar one of our female students was placed in a situation for the first time. She automatically applied the principals she had learned, performed the technique, and removed the gun in the standard down and up fashion. At our school we focus on teaching these six principal techniques below for practice and we have seen positive results.

1) Two Hand Grab – It can apply against a threat from the front (high, middle, and low), at a distance, side, standing & ground. It really is a great all around technique allowing you to use two hands to control the gun. Shoot for the basket.

2) Shove it – Three variations with fingers down, fingers up, fingers down & up. Key detail is to remember the gun should point down and then up. This is great with a little burst in and useful when the gun threat is near the attacker and shoved to the chest or midsection.

3) Diagonal Block & Catch – It can apply in many situations and variations. Stepping forward, stepping backward, against a wall, on the ground, & hostage with gun on shoulder just to name a few.

4) Arm Over– It can apply against a threat where the gun is shoved into the shoulder and other times when you are shoved off balance and your arms move up to gain balance.

5) Arm Under Front–Multiple variations with a pin to chest, two thumbs up, and the shoulder hug. This little gem can be used to handle many fontal gun threats, on a passenger vehicle, or sitting with the attacker pointing the gun to your knee. Lead arm controls the gun.

6) Arm Under Side/ Back– A good example of this technique would be the gun pointed to the small of the back. It is a similar trap Arm Under Front but it is followed up with a strike and the rear arm controls the gun.

The applications above are not intended to be an all inclusive list of applications for these techniques but to illustrate the economy of motion, learning efficiency, and ease of application regarding IKI Krav Maga techniques. It can be overwhelming to think of how many self-defense scenarios exist and trying to memorize which technique is required for each scenario.

The IKI Krav Maga system has evolved into a system that only requires six principal techniques to handle the vast majority of gun threats and it does not require super strength or complex precise movements to execute the techniques successfully. The same can be said of other IKI Krav Maga techniques against knife threats, knife attacks, stick attacks, empty hand attacks, or whatever the self defense application may be. 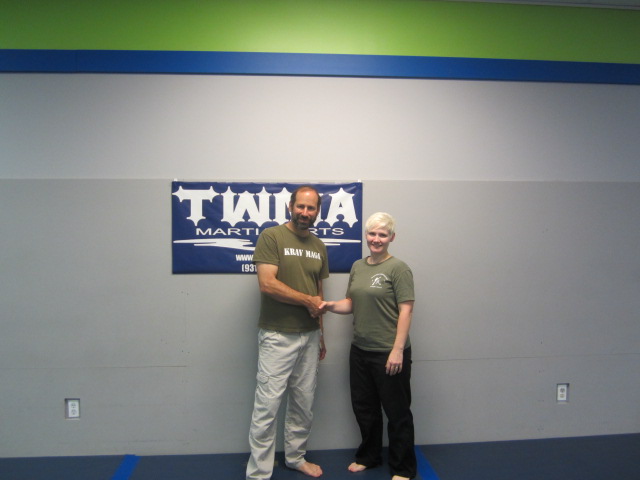 Misti Garrett being promoted to Apprentice Instructor after many years of Krav Maga training. 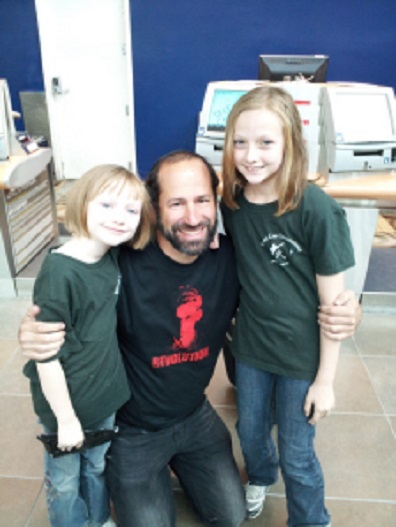 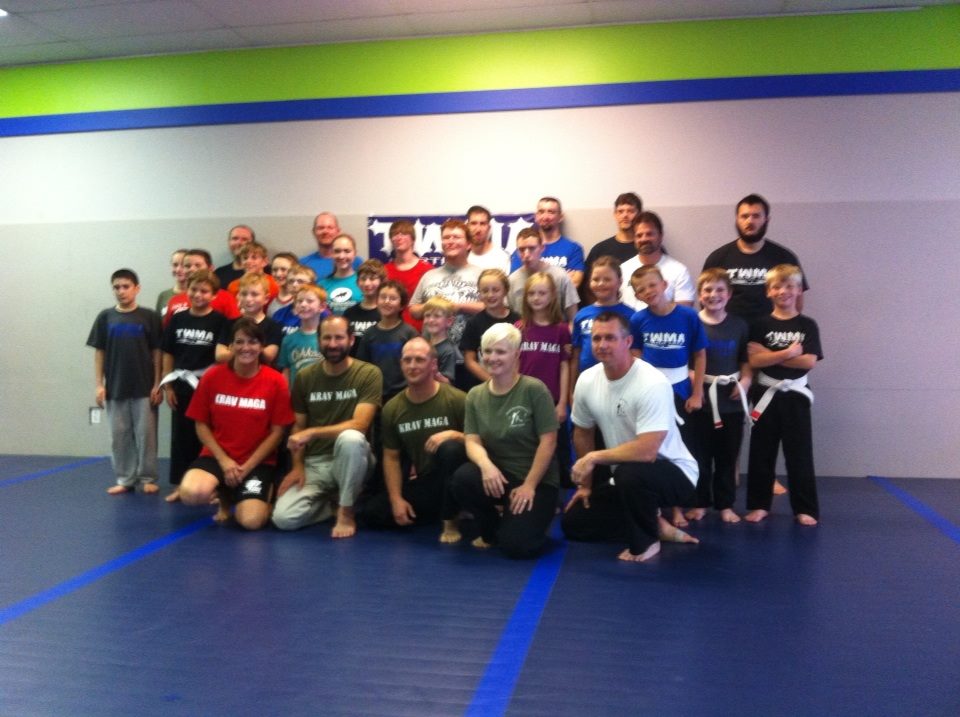 With Tim and Misti Garrett, seminar 2013. Tim maintains regular contact with Moshe Katz and trains with him as often as possible.

Tim Garrett came to IKI with many high level ranks and martial arts accomplishments. He also came with humility, an "empty cup" and a desire to learn. He is today a certified IKI instructor, an IKI Black Belt and an IKI Kickboxing instructor.

to host an IKI Krav Maga seminar please contact us.