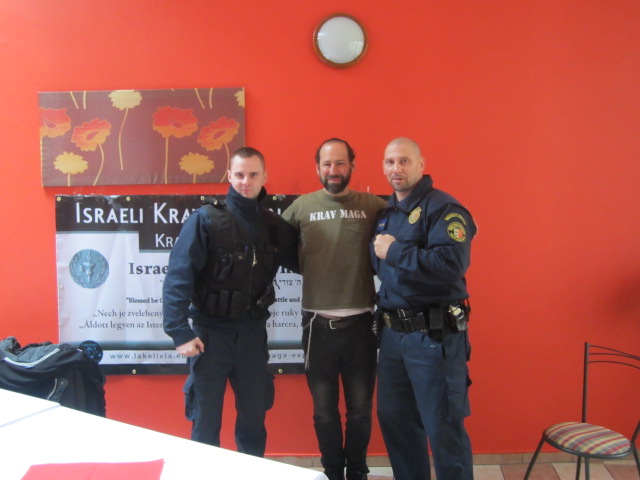 Moshe with police force Dunajska Streda, Slovakia, one of the many forces he has trained.

After a recent seminar in Panama a woman came up to me, "So this is what Civilian Krav Maga is like".

I reiterate there is no such thing as Civilian Krav Maga, Military Krav Maga, Police Krav Maga, Dentist Krav Maga, Women's Krav Maga, Children under the age of 14 Krav Maga or anything else. It is a hoax, a red herring, a trick to make more money.

Allow me to explain. Krav Maga is a system that trains us to react rapidly and instinctively, you cannot have two or more competing systems in your head, it will not work. The thought process required to search and activate a system will slow you down. In technical terms you are slowing down your computer, you have too much on your desk top.

What we have is ONE unified system, one set of concepts that can be applied to any situation or environment. Call it "Everywhere Krav Maga".

Yes, you can have a seminar in an auditorium. You can have a Krav Maga seminar in a bus, on a plane, and yes you will have to adapt to an office building, an elevator, a staircase. As my dear friend and teacher Mr. Arthur Cohen told me, high jump kicks will not work for his friends in the coast guard on patrol boats. Jujitsu joint locks will not work for his friends in the Alaska police force wearing several layers and heavy jackets.  So we apply our Krav Maga to every circumstance and situation. This is built in to the IKI system.

So if we hold an "Office Building Krav Maga" seminar you will find tables, desks, cubicles, computers and other obstacles. We will have to adapt for this but, and it is a big But, you will not see any new techniques. And as we always teach our APC - Ability, Purpose, Circumstances, will determine how we follow up.

Is the person an angry office worker who did not get promoted or a Jihadist terrorist? It is not whether you are military or civilian that matters but the circumstances, the environment and your ability.

People believe a lot of nonsense without thinking about it too much, especially if it comes from a position of authority. But I appeal to your logic, your common sense, your intelligence to understand the truth and avoid the distraction of the Red Herring of Krav Maga.

People expect to see a muscular tattooed guy spouting profanities and shouting "Give me 50 pushups you Losers", this is what a "real Krav Maga instructor looks like". Really? Who said so?

And when you see a mild mannered polite guy teaching, without insulting and without hurting anyone, well, that must be the "soft, mild, Civilian Krav Maga",

And on my father's side, grandfather Aharon the high priest, was known as one who "Loved peace and pursued peace" but when action was required his grandson Phineas rose up and grabbed a javelin and slew the offenders. His descendants, the Maccabees, would lead a successful rebellion against the Greeks.

Trust us, we know how to fight, we know how to kill, but we prefer peace. We are gentle warriors who prefer the path of peace but are ready for war at all times and in all places. Do not confuse our gentleness with weakness.

The voice is the voice of Jacob but the hands are the hands of Esau. Know this well.

Understand the true roots of Israeli Krav Maga, Meet David and Samson and the Hebrew warriors of old. Understand how their lessons mold our fighters of today.