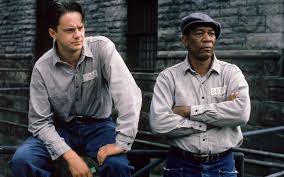 Andy and Red, hope or acceptance?
"There is something inside that they cannot touch, hope" (Andy)
"Let me tell you something my friend - Hope is a dangerous thing. Hope can drive a man insane." (Red)

Faith. A controversial topic. Are the faithful the enlightened ones or is "Religion the opium of the people." Is the age of enlightenment one where people finally throw off the primitive yoke of religion, or is enlightenment when people finally realize the truth that this universe is more than a series of random coincidences, that a divine force is guiding us, that we are never alone?

Is faith truth or an illusion? Who possess the truth, the believers or the atheists?

The debate began long ago and is far from having run its course.

But there is another question. Many will argue that faith gives hope. There is no doubt that those with religious faith have something to believe in, something to hope for, and this gives them peace. And yet the non-believers will argue that it is a false hope, a grand illusion, nothing but deception.

Some religions stress that faith will motivate you to take action. You believe in your faith and so you go out on a Holy Crusade, or Jihad. As part of your faith you either forcibly convert others, or just kill them. The more civilized will just drive you crazy, knocking down your doors and trying to convert you to the "true faith". They will preach eternal damnation for those who reject their particular savior.

And some faiths, or religion, will preach lack of action; Accept, submit. The debate is; Is hope a good thing or a bad? The movie The Shawshank Redemption, a true classic, tackles this issue honestly, is hope a positive factor in our lives, or a negative. Andy believes in hope, Red does not.

You might say Andy represents the religious idea that hope gives people reason to live, to go on despite the tragedies of life. Thus hope is a good thing. Red represents the idea of acceptance, i.e. hope is the source of pain, give up hope and accept life as it is. Zen. Once you accept your situation you can deal with it. Hope creates expectations, these will not be fulfilled and thus you will go crazy. It is better to just accept your situation.

Every kid in America grows up with the idea that he could be president, he could play in the major leagues. Of course only one person will be president every four years, and only a few hundred will play major league baseball.

At a certain point in life most of us accept that we will never be a major leaguer, we will not pitch in the world series, and we will not be president of the United States of America.

Once we accept that we can move on to regular productive lives. Acceptance frees us from unnecessary pain.

Hope or no hope, Andy and Red, the debate continues. 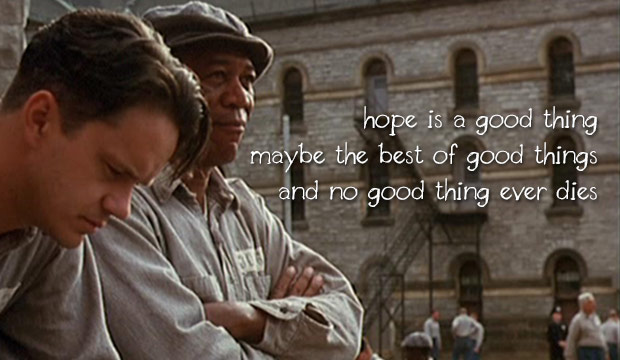 One of the legitimate claims against organized religion is that far too often throughout history it has been controlled by powerful men, powerful organizations that are inherently corrupt. That is why Adolf Hitler so admired the Church. He too wanted blind obedience, he so admired an organization that could keep people under control for 1,500 years and not question authority. Blind faith serves the purposes of our leaders. He studied the methods of the Church in an attempt to instill the same faith in his followers, faith in him as a leader.

For such reasons people of faith have been mocked.

And yet faith has motivated great fights for freedom. Today we celebrate Chanuka where Mattathias the High Priest of Israel rose up against the invaders and called out "Whoever is for God join with me" and he and his sons proceeded to victory.

Faith can come in different forms.

People say "believe in yourself" but what does this mean?  Are you making yourself a god and replacing God the creator? Who are you!

In fact what is being said, whether it is understood or not, is that your creator has given you incredible powers. Believe in those powers, believe you can achieve great things, for this is the reason you were created.

Believing in yourself is actually a great belief in God, for if you believe in the product than you believe in he would created this wonderful product.

But belief and faith can also lead to passivity. Many, both secular and religious, believe that all will be good and we need not bother to make an effort. The religious will say, "Trust in God, he will solve all the problems". The secular will say, "Do not worry, things have a way of working themselves out."

I believe both to be wrong.

Faith is not the sole possession of the "religious".

Faith should not be an excuse for not taking action. We all know..."God helps those who help themselves".

Faith is energy to make a difference, to get off the couch and believe you can move mountains. Faith is not an excuse for lack of action. Lets us not confuse faith for laziness.

I believe that faith is a force that will spur us on to take action, as long as it is still possible, and to accept that which we cannot change, once action is no longer possible.

When religious Jews walked into the gas chambers, knowing their fate but yet having exhausted all opportunities for resistance, they knew they were going to another life, another dimension, that the soul is eternal and that their death was an act of proclaiming their faith. For those with no faith it was just the end of the road, dust to dust.

While we live, while we have options for action, faith can be an active force in our lives. Whether you call it faith in God, faith in the Universe, the Force, or faith in yourself, it is still faith.

Keep the faith and it will keep you.

Those who say, I do not need Krav Maga, I have faith that God will protect me, is, I believe, a false faith, the lazy man's way of saying I cannot be bothered.

Dream...before it is too late.

"Get busy living, or get busy dying" (Red, Morgan Freeman, The Shawshank Redemption)