Every year at Passover we recite the Haggadah, or the Story of the Exodus and the history of our people. Passover might be called our earliest Independence Day, the day we became free of Egyptian bondage and slavery and began our journey as a free nation to the Land of Israel. However, unlike most Independence Day celebrations this is not a party day, it is a night devoted to education.

Independence Day celebrations take several forms, in some countries it is a day off, family, barbecue, the beach etc. In other countries it is an opportunity to show off the nations' military might. i.e. Parade through the streets with weapons of mass destruction. Nothing says True Freedom like the implied threat of killing millions of innocent people. Our Freedom is very different.

Our Freedom is a spiritual freedom. There is nothing on Passover about military might or prowess. It is all about education. Passover is a night to pass on the traditions, the legacy, the history, to the next generation. However the rabbis make it clear than even if no children are present, the discussions and the lessons must continue. It is written; even if we are all wise, even if we are all educated, it is commanded upon us to delve into the story of the Exodus. This means - On going self education. We believe in the value of study, in self-improvement, in always striving to understand more.

It is traditional that the youngest child who is able to participate, asks "The Four Questions", these are four questions that help open a discussion about how and why this night is different from all other nights of the year. While the child reads a set format the idea is for it to lead to discussion and deeper understanding. And if no child is present an adult will read the four questions. Even if one is conducting the Seder by himself, he must still ask the four questions. Indeed, we must always ask ourselves questions.

So we stay up all night asking questions. Some are only interested in "getting over" with the boring ritual and getting to the tasty food, but for me it is the animated questions and answers that make this night special. In particular I am happy when there is a Yeshiva/Rabbinical student present, as there was this year. I love the enthusiasm of the young scholars, already so well versed in our ancient writings. They delve into the words of the rabbis written centuries ago and seek deeper understanding. The flame still burns and the torch is passed on.

Later on in the Haggadah we have the Four Sons. 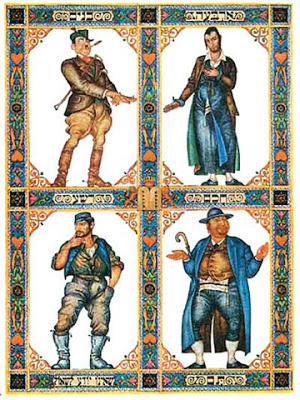 Traditional depiction of the four sons

The Four Sons of the Passover story are the Wise Son, the Wicked Son, the Simple Son, and the One who does not know how to ask. Some these days have added a fifth son, the one who does not even show up for the traditional Seder.

Countless commentaries have been written on the topic of the Four Sons and what they represent, this is one the most popular topics of the Passover night. Indeed several volumes could be filled with the many interpretations and applications of the Four Sons and their relevance to modern life and challenges. The basic idea is that we are commanded to teach the next generation, to pass on the knowledge, the wisdom and the process of attaining wisdom. To do this effectively we must understand that we will face different personality types, people with different backgrounds and aptitudes, we must relate to each according to his nature and circumstances. That is why this is such a powerful educational tool.

Thus we see two key elements in this most special of nights; the concept of Questions and the concept of relating differently to different disciples (students, sons). There is no rote learning, there is no blind obedience, those methods do not work.

Let us take a look at the Haggadah;

The Haggadah speaks of "Four Sons"- one who is wise, one who is wicked, one who is simple, and one who does not know how to ask. The number four is derived from the four passages in the Torah where one is commanded to explain the Exodus to one's son. Each of the sons phrases his question in a different way. We are told to answer each son according to his question.

"Blessed be God, blessed be He. Blessed is the One who gave the Torah to his people....concerning four sons the Torah speaks: One who is wise, one who is wicked, one who is simple and one who does not know how to ask.

The Wise Son - What does he say? "What is the meaning of the testimonies, decrees, and laws which our God has commanded us?" Therefore explain to him in great detail all the laws concerning the Passover service.

The Wicked Son - What does he say? "What purpose does all this have for you?" He says "to you", thereby excluding himself from our congregation. By excluding himself he denies our purpose and essence, the principles by which we live. And we answer him accordingly; you will blunt his teeth and say to him, "For the sake of this did God  do this for me in my going of Egypt." "for me", and not for him for had he been there he would not have been redeemed.

The Simple Son - What does he say? "What is this?, Tell him, "With a strong hand God took us out of Egypt"

As for the Son who does not know how to ask - You must prompt him. As it is written, "You shall tell your son on that day It is because of what the Almighty did for me when I left Egypt."

Applying this to Krav Maga.

We encourage questions. Questions are often more important than answers. The student should feel free to ask questions and to question techniques, this leads to greater wisdom. However there are different ways to ask, and different ways to answer. The Wise Son asks in a polite dignified way, he may say: I am having trouble understanding this technique of ours, perhaps the teacher can help me understand. He will be answered in a manner befitting his question. Note that he says, "our", he feels part of the team, part of association. He is asking because he wants to improve. The teacher feels that "he is one of us."

The Wicked Son would ask; What is this technique of yours! It makes no sense and it does not work.

The question is being asked in a disrespectful way. He is putting the instructor in an awkward, defensive, position. He is placing himself on the outside, the challenger. Many instructors will choose to use this student to prove just how well the technique works. I have seen this.

The Simple Son; we all know this type. He shows up at the dojo and in the first lesson he wants all the answers. He is too lazy to commit to serious training. He has zero real experience but wants to see the "results" right away. He is not interested in the process, he wants to see all the solutions, gun, knife, stick, multiple attackers, right away. He is like the Gentile who came to Hillel and Shamai nearly 2,000 years ago and asked to learn the "entire Torah while standing on one foot". To keep such a student interested is a serious challenge.

The Son who does not know how to ask - This might be someone who comes to the dojo out of curiosity. He does not really see the purpose of all this training and effort, and does not even know where to begin. So no question is asked. This kind of person must be prompt, you must approach them and explain to them what this is all about, what the students are doing, and why.

As Instructors we must learn to be patient. We must learn to encourage students to ask "The Four Questions" i.e. feel comfortable asking questions. Questions lead to improvements in our teaching methods and sometimes in improving techniques. As instructors we need to understand that not all students are the same, not all will understand in the same way or at the same pace. We need to remember the Four Sons, and teach each on in his own way, as it is written in Proverbs, Teach the young one according to his way, even as he grows old he will not depart from it.

The Wise Son asks a very detailed question which shows that he is very interested and is searching for an answer that will satisfy him.

The Wicked Son does not so much ask a question as make a statement. He's saying, in effect: "Why do you care so much about all this traditional stuff?" He does not really want an answer, he does not want to really learn or explore anything, he is just mocking what we are doing. So we don't take the time to reallyh answer him, instead we try to teach the rest of the group/family.

The Simple Son's question seems similar to the Wicket Son's, but yet the tone, the attitude, is very different. He is genuinely interested but simply lacks knowledge. Therefore we answer him in a similar way to the Wise Son, and eventually he become the Wise Son as well.

The Son Who Does Not Know How to Ask - Does not even know how to formulate a question, he must be encouraged, prompted, to ask. This must be done in a gentle manner. He has never really taken any interest.