Today in Israel is Holocaust and Martyrs Remembrance Day. But I am not going to tell any Holocaust stories today. Everyone else is doing that.

Recently I was told that perhaps I should tone down the way I say certain things, that perhaps my words are a tad too harsh, offensive and even condescending and insulting.

I think my words are fair, but more than that, I feel they are just and necessary.

How did the Holocaust begin?

It began the first time a person uttered a word of hatred or criticism and someone else decided "not to be offensive" and not to speak their mind.

It began when some easy going person decided to just "go along with it" rather than make a fuss and ruffle people's feathers.

It began the first time an antisemitic slur went unchecked - the death process began. But ...lets not speak harsh words, less they offend someone.

When the trials began after the war it was amazing to discover that actually no one was to blame. Everyone was just following orders, everyone was just fitting in. No one was actually responsible and many many killers were acquitted for "lack of evidence".

Joseph Aloisius Ratzinger, later known as Pope Benedict XVI, was only doing what everyone was doing, joining the Hitler Youth and going along with it.

Very few wanted to speak harsh words, not in polite company. When you hold your tongue you are allowing IT to happen.

Who was responsible? I will tell you, it was the maid who made the bed at the hotel where the Nazis stayed, yes, it was her. She could have done something, she could have refused to work for them.

It was the driver who took the job driving them around. Yes, I accuse him as well.

It was IBM that provided logistical support.

It was the lady who so carefully arranged the flowers at the Wannsee Conference.

It was everyone who refused to stand up and speak harsh words and say "I believe this is wrong and I will not go along with it".

Evil starts when hatred goes unchecked, unopposed. The cure begins when someone stands up, and without apologies, says, "Damn it! This is not right and I am not going to stand for this". Even if there is a price to pay.

Yes, even in polite company. The hell with manners, the truth must be heard. Offending a few sensitive people is a risk I think we should be willing to take. Ultimately it is for our collective good. Otherwise we watch our world go to hell, as it did in the past...and the guilt - is - spread - far - and - wide. 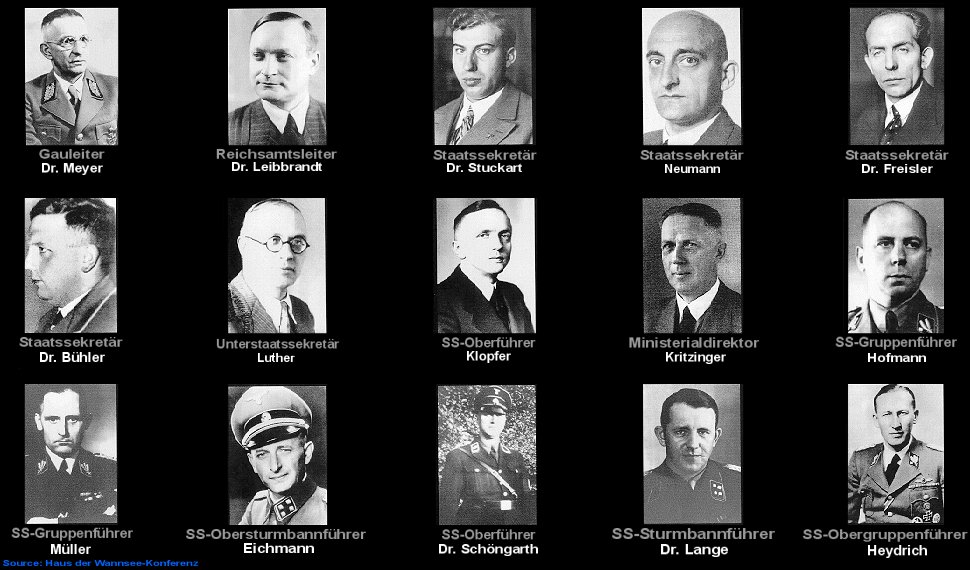 In attendance at the Wannsee Conference.

I deal with survival, with self-defense. If I see a style that I believe will get you killed on the street, by God I will say so. I will express my opinion  loud and clear and you are free to disagree as loudly as you want. But I will not be silenced and I will not be intimidated. If you think I am wrong I am giving you a chance to make your point.