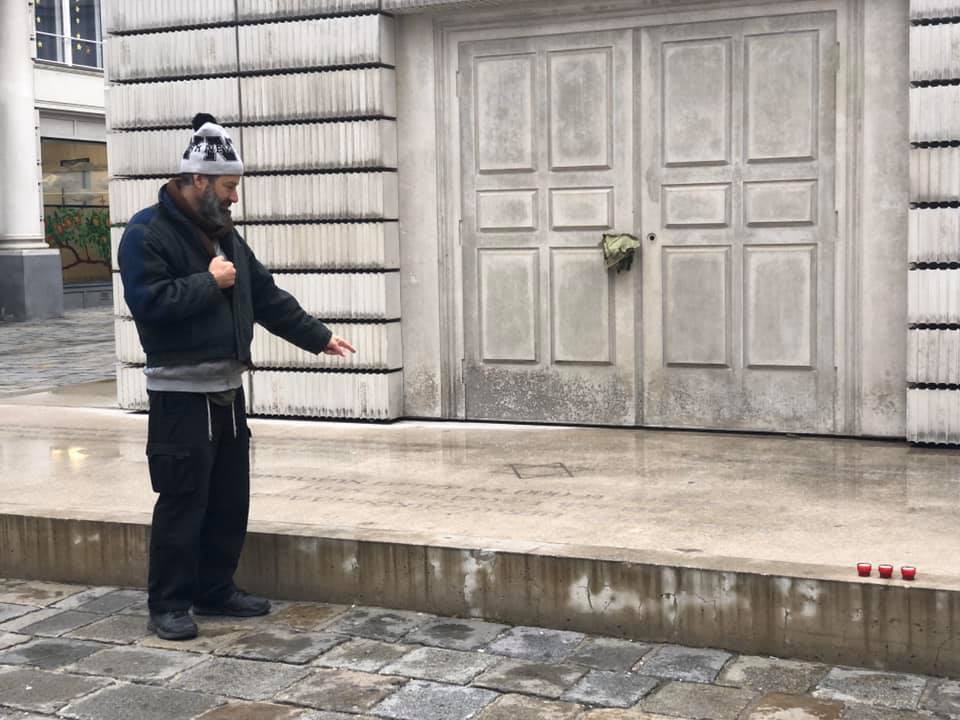 Moshe at the JudenPlatz, a memorial to the Jews of Austria killed during the Nazi era, built directly on top of the great synagogue of Vienna destroyed in the years 1420-1421.

In Vienna I am learning some of the history of Jews of Austria and in particular the Jewish community of Vienna. It is a tragic heartbreaking story.

The first known Jew to live in Vienna was a fellow named Shlom, or Shalom, in 1194. Thus the history of the Jews in Vienna goes back more than 800 years. It is a history of struggle, success, persecution, assimilation, and destruction. After more than 800 years the Jews of Vienna are still in a precarious state; all Jewish public houses are protected by armed security guards, Jews are warned not to gather outside of synagogues, in order not to attract "unwanted attention."

The Medieval Jews lived in an area that today again is inhabited by some Jews, although it is mostly a major commercial district: it is District 1 of Vienna, the Innere Stadt, downtown.

The first Jews lived around the Seitenstettengasse where the great synagogue, the Stadttempel still exists today. It is the only synagogue to survive the Nazi era. The only reason it was not burnt down along with the rest of the Jewish houses of worship is that it is surrounded by residential apartment buildings. The local Austrian Nazis were afraid of burning the homes of their own people. Ironically it was an anti-Semitic law that protected the great synagogue from destruction. Back in the 1700's emperor Joseph II (1741-1790) issued an edit that only Roman Catholic places of worship could face the street, others must be hidden from view in order not to offend the public.

This past Friday night I was privileged to pray in this synagogue. I felt I was praying with those who prayed here during many generations, including those murdered during the Nazi era. More than 65,000 Austrian Jews were killed during "The Final Solution to the Jewish Question". Their names are engraved in a memorial in the synagogue.

I visited the Jewish museum and learned some of our tragic history. From the 13th to 15th century the Jewish community grew and even produced a great scholar, Yitzhak son of Moshe, known as the Or Zarua, Hebrew for Planted Light, the name of his book which is still studied to this very day. He is known as one of the greatest rabbis of the middle ages.

The Jewish community came to an abrupt and violent end in the years 1420/1 when Albert V ordered the annihilation of the city's Jews. Hundreds of Jews were forced into baptism while hundreds more were taken to the outskirts of the city and slaughtered. The homes of the Jews were given to the kings chosen favorites and the synagogue was destroyed, the bricks were used to build a university. Ironically a university is supposed to be a center of learning and enlightenment.

The Jews were only officially allowed to return in 1624 although a small Jewish community had been growing since 1512 when 12 Jewish families were living in this area. The Jewish community grew by the periodic granting of special exemptions, i.e. the king would allow a Jew to settle in his area if he felt he could benefit by this Jew's skill. Thus Jews who could help the king financially were invited in. These Jews were often "Court Jews", or Hofjude, special Jews who could finance the emperor. In fact such court Jews were the key factor in Austria surviving the Great Turkish War of  1683 -1699. It was court Jew Samuel Oppenheimer, a remarkable man, who provided the oats for the horses and the funds to keep up Austria's defenses. These are historic facts that have yet to be officially acknowledged by the Austrians.

The second destruction of Vienna's Jews took place in the end of the 17th century when once again an emperor decided to rid his kingdom of Jews.

The third destruction of Vienna's Jews was of course during the Holocaust, which came early to Vienna, 1938 - 1945.

At the Jewish museum I saw a line that inspired this blog, a survivor wrote of his friends, "An hour from liberation but fifteen minutes from dead". Just to explain that which should be obvious: The Jews in the concentration camps, so close to being liberated by the Allies, only an hour away! but death was even closer. Many Jews died shortly before Liberation, they were waiting and waiting but in the end it was too late. An hour from Liberation, but death from fatigue, starvation and disease was closer, only fifteen minutes away.

The Jews in the Death Camps could do little, they did stage several revolts, some tried to escape, but their situation was nearly hopeless. We on the other hand have opportunities. We can train, we can prepare ourselves. This is our obligation.

Help might be an hour away, but death is only fifteen minutes away, so we cannot wait for help to come. We must be the First Responder. We have to train ourselves in effective self defense, Krav Maga. At IKI, Israeli Krav International, we offer this training. The next step is up to you. Remember, help is an hour away...

We currently have two instructors serving the population of Vienna. Thanassi Stellatos and Aharon Halevy. Thanassi teaches Krav Maga lessons to the general public, young and old, men and women. He can be reached at Dasdojo.at

Aharon offers security consulting and will soon be opening a school for security and arms training.

Join us for training in Israel

Join us in Israel for a life changing experience.

You have two programs to choose from.

1. Our classic, world renowned, Israel Tour and Train experience. Two weeks of training and touring: training in all aspects of Krav Maga and visiting sites of military, historic and religious value.

Register For all programs

We have published the blogs in book form.

In addition to the classic, Israel: A Nation of Warriors, we have over 10 volumes of Krav Maga blog books. Available on Amazon or directly from IKI. (signed by author)