"Invisible people do not exist"

If a tree falls in the forest and no one is around to hear it, did it actually make a sound? This is a philosophical question. The answer is given; if there are no ears to hear it, there will be no sound.

If a child cries out in pain but no one hears it, was there a sound?

Does something exist if it is not perceived by others?

Every day people walk to work, silently, in pain, does the universe hear their pain?

The world is filled with silent sufferers who bear their pain with dignity and self-reserve. They keep it to themselves, they wear a mask, (not a Corona mask).

If a poor man hurts, if one of the ignored people suffers, is the pain heard?

All the lonely people, where do they all come from, and does anyone hear them?

Father McKenzie writing the words of a sermon that no one will hear...

But he writes, and he feels,

No one comes near...look at him working, what does he care...

When a broken person comes to our class, do we see his, her pain? Do we see the suffering, do we feel his hurt? We must, we must.

Do we hear the pain the Silent Lonely people. These are the regular people, not the Corporate leaders, not the Power Brokers, not the Conglomerates, just the Little People on the bottom.

As instructors we must never lose our heart, our pure desire to help others, we cannot turn away the lonely people. I wrote this blog on the plane while flying and thinking about my mission in the upcoming month. I thought of all the difficulties of this terrible period and I promised myself never to turn away a student for a lack of money.

All the Lonely People, where do they all come from? But I can tell you this, they are coming to me, and they will always be welcome. Last night I landed in Los Angeles, the place where I spent many happy years, the place I was also known as the Karate Kid, the place were I dreamed dreams.

and now I am back, and as I drive around I wonder; would I ever be able to "make it" here? the costs are so high, the rent of a studio, the expenses. I have no intention of staying for long but I am thinking, what would I do?

My dear friend Robert, may he rest in peace, became a psychiatrist to help people in pain, I became a Krav Maga instructor for the same reason. We shared this passion for helping people. Now I am here to visit him, but he is on the other side, but I feel his presence.

All the Lonely People, we must never forget them, we must hear their silent pain. If a poor person cries out in pain, if a hungry child cries out in hunger, we must be there to hear it.

The poor rarely come to martial arts studios, but we must make it possible for everyone to train; Krav Maga for the people, all the people.

Cities and empires were built on the backs of the Lonely Silent People. Robert Moses built New York City by displacing over a quarter of a million such people. He said history will forget them. The great Russian cities, the Roman Empire, all built on the backs of the Lonely People. The names of the Czars, Czarinas and Roman Emperors are known to us, but do we know the name of one person who built these empires?

Do we know the names of the Chinese immigrant workers were built the railroads?

Does something exist if it is not perceived by the consciousness of human ears?

I believe the Universe hears the pain, I believe that God hears the pain. As it is written when the Jewish people were slaves under Pharaoh of Egypt, "And I have heard their cry...and I have felt their sorrow" (Exodus Chapter 3), and so it is of all those who toil and suffer in silence.

We, Self-Defense instructors, must feel this pain. We must empower the people, we must make this training part of our culture, as it is written, "and he ordered to teach the Children of Judah the art of the bow (and arrow)" (Book of Samuel 2, Chapter 1, verse 18)

Bruce Lee spoke of martial arts, back in the 1960's, as an act of "Personal Liberation", as protest against oppression. It is our personal act of speaking up for ourselves and all the Silent Invisible people.

I am in the Valley now, California, where so many memories took place, and feelings resurface, long lost memories. and I remember Hope and belief in the future. Here I bought my Ibanez guitar, my Fender guitar, and my Ovation guitar, in fact all my 3 guitars were purchased here in California. For me, despite all the obvious materialism, California is still a place of spiritual hope. It is still a place of dreams. It is a place where a boy can buy a cheap guitar and dream of being a rock n roll star. I worked cleaning toilets with Mexican immigrants to earn my money for my Ibanez guitar. I purchased it on the lay-away plan. My first word in Spanish was baños, toilet, as that was the task given to the new guy.

I bought my guitar and dreamed of playing my song on stage around the world. Well, that dream came true, only my song is in a different form than I expected. My song is a song of hope, a song of the people, and it takes the form of the physical movement of Krav Maga.

Nearly 2,000 years ago a group of men, women and children, stood on a mountain top in Israel, it was called Masada, they faced a hopeless situation facing the Roman legions, but yet they lived, they hoped, they prayed.

For nearly 2,000 years their voice was not heard, they were nearly forgotten, until a German expedition rediscovered Masada and the myth became historical fact. Their long held silence was broken and we finally heard their suffering. We felt their pain and we cried out Masada Shall Not Fall Again!

They finally had a voice.

Our task is to give a voice to the silent, to hear and feel all the lonely people, to hear the tree that falls where no human ears can perceive it. The Universe hears and feels all. 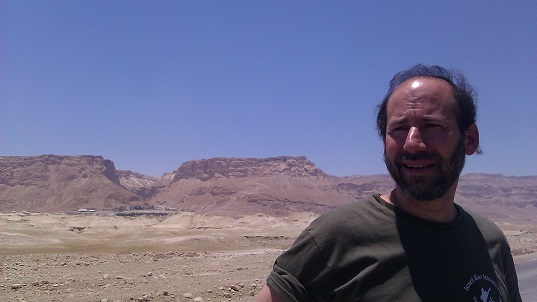