Yesterday I flew home from Israel. I fly El Al, Israel's national airline, period. This is my airline, so if you invite me for a seminar do not seek a cheap deal with Air Turkey, or "Fred's Discount airline", for me it is El Al.

On El Al flights there is a special edition of Israeli news, specifically for the airline passenger. Sadly, tragically, nearly every time I have flown home from Europe I have watched the news only to witness yet another attack against Jews/Israelis.

The difference is that unlike the attacks on Israelis and Jews in Europe, this one was not successful, because in this case Israelis were on guard.

I was in Holland and I noticed that near the El Al counter there were many armed police officers. Wisely I was the one detained and questioned at length, (in a private room with three armed guards). In Germany too I noticed men with automatic long weapons only in the El Al section, made me think of how well they performed in 1972 when our athletes needed a little help. The result- eleven of our best athletes murdered in cold bold. And now 40 years later the Olympics refuse to even honor their memory.

I was just in Italy, and again, I noticed 3 armed police officers near the El Al counter, I did not notice the presence of officers anywhere else. Again I was pulled aside for questioning. (and yet my friends say I look like a nice guy, is it the beard?)

The armored personal carrier, filled with tons of explosive and six armed terrorists, (yes, they are terrorists, not freedom fighters, there is a difference) raced into Israel. But Israel was on guard and tracked them immediately. The Bedouin trackers fired first and alerted the Israeli military.

All roads were closed, soon enough Israeli helicopters fired a direct shot and destroyed the enemy vehicle. Israel returned the burnt out vehicle to the embarrassed Egyptians.

So this time it ended differently, because this time, Israel a nation of warriors, took care of the problem, not the Germans, not the French and not the Bulgarians.

Israel is safe because we keep it safe, not because our enemies are lazy. Let the world know that not a day passes without an attempted terrorist attack, but we, and you our guests, are safe because the guardian of Israel does not rest and does not sleep, so you can sleep well.

Israel, a Nation of Warriors
by Moshe Katz 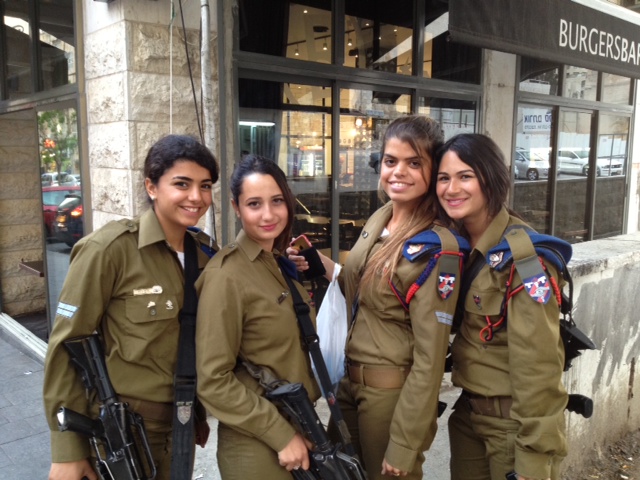 With the establishment of the modern state of Israel in 1948, the world saw a new Jew arise from the ashes of the Holocaust and
from millennium of persecution in Arab lands. From the four
corners of the earth, the Jewish people, the nation of Israel,
returned home. The "Dry Bones" came to life creating a
democratic state and a powerful military.

But this was not a new Jew at all. It was just the old Jew getting
up from the ruins of his destroyed life in the exile, dusting
himself off and returning home.

Much has been written about Jewish history but rarely has the
Fighting History of the Jewish people been told. Known as the
"People of the Book" few know the age-old fighting spirit of this
nation.

From the first Hebrew warrior to the Israel Defense Forces of
today, we trace the fighting heritage and history of the Hebrew
warrior.

We examine the modern Israeli close quarter combat system;
Krav Maga, analyze its components and attributes and why it is
sought after by security forces worldwide.

"Israel, A Nation of Warriors" takes a look at the society that
has produced a military, security system and everyday
civilian/warrior heroes that have amazed the world.