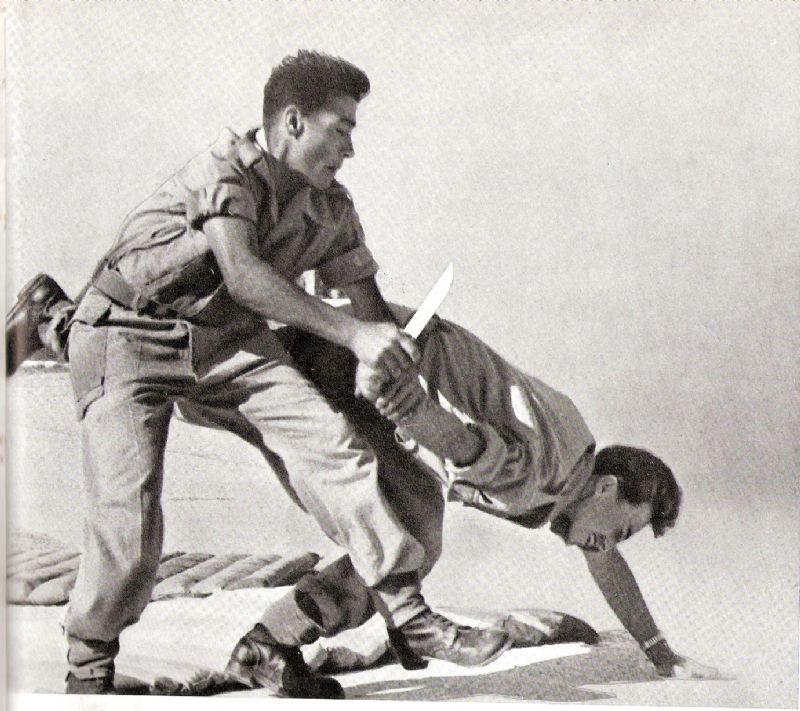 Israeli martial arts have been growing in popularity. Recently both the history channel and the Discovery channel produced show about Krav Maga.

Most importantly are the differences based on what the styles includes and focuses on: That is what I will address here.

Israeli martial arts in the 1930's was known as Kapap, which is the Hebrew abbreviation of Krav Panim el Panim face to face combat, or battle. This apparently included the earliest form of Krav Maga. It was taught to members of the Palmach, the early commandoes of the pre-state Of Israel fighting force known as Haganah.

This was not specifically a martial art but an overall training program that included everything a commando needed; hand to hand combat, rigorous physical condition, firearms training, explosives training, radio communications, navigation, wilderness survival training, combat first aid and foreign languages such as German and Arabic. From the photos it is clear that the physical conditioning was taken very seriously. We see hikes, mountain climbing, swimming, obstacle courses, and a great deal of rope climbing.

The self defense aspect had yet to be named Krav Maga; it was simply the unarmed portion of the training. This included boxing, Judo, wrestling, knife fighting, stick fighting, and gun disarms. Some veterans whom I have spoken with told of training with jackets; pulling it off rapidly and covering the attacker's face and then taking him down. Some excellent photos can be found on the official Palmach website although you will need some Hebrew to navigate through the many photo albums.

The style was known for its use of sticks, the short staff in particular. Most speak of a stick that was about a meter long. Countless youth of the time became experts in its use. Old timers I have met still talk of using their stick to fight off Arabs with knives. In the days when hiking and walking were more common than taking taxis, a true luxury, the stick was a multi purpose tool, a walking stick and protection against Arab attacks. 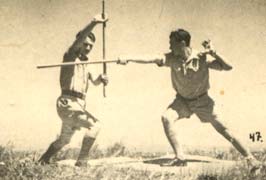 One of the uniquely Israeli applications of this stick fighting was the aggressive, offensive nature of the training and of its use. Older practitioners describe that when an attacker appeared, someone would shout,  "The enemy is here!" and the practitioners would raise up their sticks in one hand while the other hand was ready for action as well. They trained not to run away. You face the enemy straight on and make it clear that you are not afraid. You wave your stick at him. This was critically important in the early days of the state of Israel when Jews were viewed as easy targets by Arabs, it was crucial to change this image drastically.

Students were taught not to fear any situation. A weapons may be dangerous but when you are well trained in it you no longer think of it as dangerous. You are trained how to use it against your enemy. Soon enough, he will back off.

The early Krav Maga training was part of Kapap. According to Itay Gil, the term Kapap was still used somewhat in the early 1960's but then fell into total disuse. The term Krav Maga replaced the term Kapap (for a while both were used interchangeably)  The early By the early 1960's Kapap ceased to exist. This information is presented in greater detail in the excellent book by historian Noah Gross.

The unique aspect of Kapap was the use of the stick, Noah Gross writes, " the 1960's saw the end of this era."

Today Krav Maga has been branches and is known worldwide as an efficient close quarter combat system.

Lotar is a Hebrew abbreviation for Lochama be Terror - Combating Terrorism.

Lotar is a general term used to describe the means, tactics and strategies that the Israeli government uses to combat terrorism. Lotar is an inclusive concept meaning anything the government, police, and military use to thwart the efforts of terrorism. It is not a specific martial art although it does include the hand to hand art of Krav Maga. Today this system is being marketed commercially outside of Israel as a martial arts style. This is false advertising, Beware!

The war against terror includes not only military or political aspects, but financial, commercial and legal aspects as well. The special police unit known as Yamam, is often referred to as the "unit that fights terror"(Lotar) although  its official purpose is defined as dealing with hostage situations as well as various encounters based both on terrorism or criminal violence.

In terms of the martial arts aspect, historically Lotar replaced Kapap. For decades the term Kapap was not really used until recently when it was revived as a commercial martial art. Part of the Lotar program is stress training; preparing the special police officer to be able to operate and function under the ever changing, worst case scenario combat environment.

Of course the police aspects of Lotar include weapons training and combat conditioning.  The Yamam is a police unit and is part of the Israeli Border Police. Much of their activity is kept out of the public view.  The Yamam was established in 1974 after the terrible massacre in the Israeli town of  Ma'alot . It was determined that a special unit was needed to handle hostage situations within urban areas.

With the establishment of the modern State of Israel in 1948, the world saw a new Jew arise from the ashes of the Holocaust and from millennia of persecution in Arab and Christian lands. From the four corners of the earth, the Jewish people, the nation of Israel, returned home. The “dry bones” came to life creating a democratic state and a powerful military. But, this was not a new Jew at all-it was just the old Jew getting up from the ruins of his destroyed life in the exile, dusting himself off, and returning home. Much has been written about Jewish history, but rarely has the “fighting history” of the Jewish people been told. Known as the “people of the Book,” few know the age-old fighting spirit of this nation. From the first Hebrew warrior to the Israel Defense Forces of today, Moshe Katz traces the fighting heritage and history of the Hebrew warrior. He examines the modern Israeli close quarter combat system, Krav Maga, analyzes its components and attributes, and the reasons it is sought after by security forces worldwide. “Israel, A Nation of Warriors” takes a look at the Israeli society that produced a military force, a security system, and everyday civilian/warrior heroes that have amazed the world. Moshe Katz is a high ranking Krav Maga instructor and founder of Israeli Krav International (IKI). He is a graduate of UCLA, Bernard Baruch College, and Wingate Institute. In addition, he spent many years in yeshivoth (Rabbinical colleges). He brings his knowledge of Jewish history, martial arts training, and lifelong experience of living in Israel to form this unique book. Moshe lives in Maaleh Adumim, Israel, and conducts Krav Maga seminars throughout the world.

On Amazon, or directly from the author