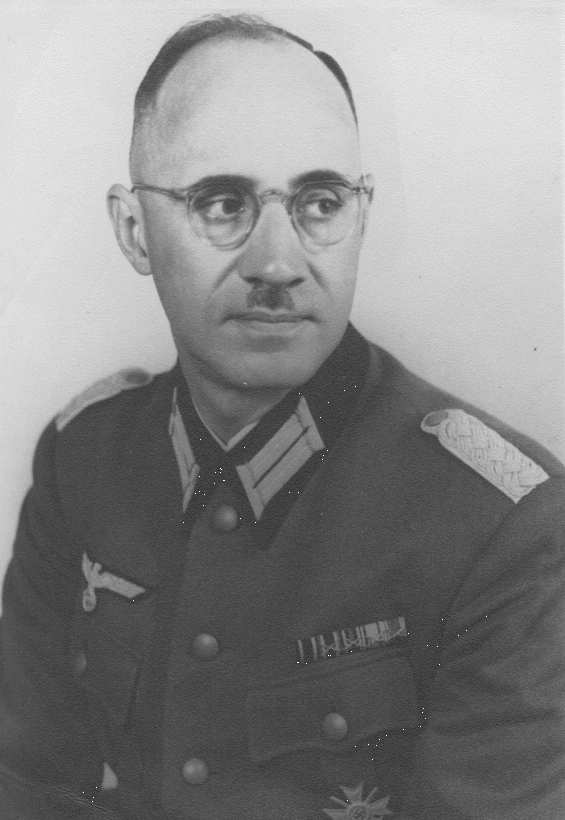 Karl Plagge in 1943. Do not be fooled by the Nazi uniform, this man is a hero, a humanitarian. Remember his name..

"A single man can indeed make a difference".

The year is 1947, a Nazi is on trial for war crimes. He refuses to defend himself.  In a surprising turn of fate he is acquitted. Why? Because his former Jewish workers have come forward to save him, they have testified on his behalf, he was a good man, a good Nazi, he saved their lives and the lives of many Jews. He tried to save many more, he was one man against many. His name was Karl Plagge.

Major Karl Plagge was a hero, but he never saw himself as such, he was just trying to do what any decent man would do. But this was a time when decent men were hard to find. He was ashamed of his people, the Germans, and he decided to work against them. He was just one man but he did what he could. He not only saved Jews, he treated them with respect. He provided extra food, medical care, and wood for fire during the harsh winters. He also allowed the workers to build Malinas secret bunkers.

He was devastated when the SS would take away some of his Jews. Once he finally felt secure enough to go to see his family, the Nazis and the Lithuanians came during his absence,  March 27, 1944, and did a Children's "Action",  Kinderactze taking away nearly all the children. Over 200 children were taken away. Men came home from work to discover this horrible situation.  After the war Plagge was a broken man, a broken hearted man, he mourned for all those he did not succeed in saving. He died of a heart attack, a broken heart.

An old building complex in Lithuania is marked for demolition. It is a prime location and it is time to build new modern apartments, but these old buildings on the outskirts of Vilnius conceal a dark secret; the current residents may not know that they are living on top of the bones of previous inhabitants - Jews who were hiding from the Nazis. Demolition is being halted at the request of an American doctor.

Dr. Michael Good discovered that his mother was saved by Major Karl Plagge. He came to Vilna to learn more about the story. He discovered that Major Plagge decided to save Jews. In order to do this he opened a workshop to repair German trucks. He took only Jewish workers, but he took not only the workers but also their families. He gave Jews a permit for life. None of these Jews were automotive experts and yet Plagge took them in, and soon they make the skilled workers that Plagge claimed they were. For the wives and children he set up a clothing workshop. He risked his life by lying to the SS.

Dr. Good came to uncover the secrets, literally. He came with tools to identify locations were things happened, such as mass burials and underground bunkers. Ground penetrating radar can discover some of the hidden past, just under the feet of little children playing care free. Other children were here in the past; Jewish children, but they were targeted for "extermination".  Can these Lithuanians children feel these other children, whose spirits are still here?

He found hidden bunkers, he found the location of his mother's bunker, based on her memoirs and sketches. He even found makeshift children's toys, left behind in haste.

He met with survivors and he heard the stories.

Towards the end of the war when the Germans knew they were beaten, they had to move the workshop. Major Plagge wanted to take his Jewish workers with him, but the SS stood firm in opposition. In his sorrowful parting speech he warned his Jews in coded language that they must hide or escape.

"The front line is moving west and HKP's assignment is to always be a certain number of miles behind the front line...As a result, you the Jews, and the workers will also be moved...since all of you are highly specialized and experienced workers in an area of great importance to the German army, you will be reassigned to an HKP unit...You will be escorted during this evacuation by the SS which, as you know, is an organization devoted to the protection of refugees. Thus, there is nothing to worry about..."

About half the Jews went into hiding, the rest naively believed that the SS would not kill them. They were all promptly taken to the infamous Ponary forest and murdered. 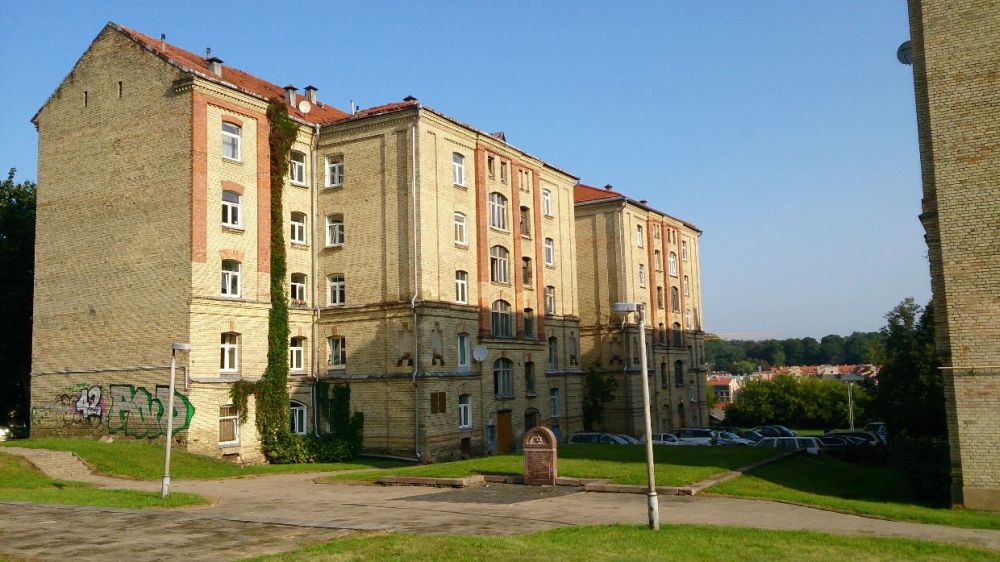 The site of the HKP structure, before demolition. It was the last surviving European World War Two work camp.

Yesterday we observed in Israel Holocaust and Bravery Memorial Day. It is called Holocaust and Bravery Day because we not only commemorate the tragedy of the Holocaust, the Shoah,  the Destruction, but also the bravery of the many Jews who fought back. We also acknowledge gratefully the many non-Jews who risked their lives on behalf of the Jewish people. They too are included in the annals of bravery.

The world is a confusing place. As a child I played with toy soldiers, good guys bus bad guys, cowboys vs  Indians, and Americans vs. Germans. It took many years until I learned that during those dark years of the Holocaust there were many Americans who fully supported the Nazi ideas and did everything possible to stop the Jews from entering the United States, even in limited numbers, and many Germans who opposed the Nazis and helped Jews. The world is not Black and White. Breckinridge Long, Joseph Kennedy, stand out as two Americans, along with many members of Congress and the State Department and the president himself who did quite a bit to keep the Jews out of America. I have in my personal library five books with full details of the American compliance in the Holocaust but the true story can fill many volumes.  It also took many years until the stories of Germans who helped Jews began to come out. Not only did many Germans do a great deal to save Jews but many who wore the dreaded Nazi uniform as well. Many books can be filled with their names, just off the top of my head; Wilm Hosenfeld, whose name is known to all from the film, The Pianist,  a Nazi who changed his perspective and saved at least 60 Jews. Rudolf Best, who saved the Jews of Denmark, Helmut Kleinicke who saved Jews at Auschwitz, and or course Kurt Gerstein who tried to warn the pope but the pope was not interested in hearing about it, and many others. Today I was thinking of Karl Plagge, who saved hundreds of Jews in Vilna. He single handedly saved more Jews in Lithuania than any other individual or group.

I grew up in the shadow of the Holocaust. I had direct knowledge of that era, the era just after the war, felt like. I experienced it first hand. But the true stories only came out later. The 1960's were too soon, it was all too fresh, and painful. Today we know more. We know the ugly side and we know the beautiful, glorious, side. When I was young I thought a new generation was rising, a better generation, the past was gone. But this was not true. Man is weak in his nature, and there are very few heroes.

People look at Europe today, at Germany, at the other countries that joyfully participated in our murder, and they say, Look, things are different today. They  are ignoring the past, and the present, and the future. There were many good Germans in those days, and they took heroic actions that amaze their grandchildren of today. When asked, would you have the courage to do what your grossfater did, your grandfather, the answer is ...I don't think so.  We must remember these men and we must learn.

I recall the words of the late Rabbi Kahane, himself gunned down by an Arab in a hotel in New York City, and his killer was allowed to go free for "lack of evidence" (in a room filled to capacity). He said to us, You think this can't happen again? You think can't happen in America? When times are good, when people own big houses and drive around their yard in a cushy lawnmower mowing their lawn, these are bad times for haters. The hater waits until the "climate "is right. You will not see haters at this time. But wait, wait until things are bad, very bad. Do you think the Germans were so different from others? Do you know what it was like in Germany at that time? Do you know how a man feels when he has not worked for 6 months, for a year, for three years!!! At this point he is no longer a man. He has lost his self-respect. He is deeply ashamed. But then when someone comes along and says "It is not your fault. There is someone out there, another group, who is responsible for this misfortune. Join me and I will make you a man again". Don't you think he will join the party? Certainly he will.

Do you want to know how people really feel? Don't look at those who attend black tie dinners awarding each other with humanitarian plaques. No, go to a bad bar, a really bad bar. Buy some a drink and start a conversation.  Ask him what he thinks of the Jews, ask him what the thinks of the "New York bankers who control the world", as the flows the hatred will come out. It can happen again, here in America.

Those were his words many years ago.

We look at Karl Plagge and we know that in every generation, in every land, there are good people and there are bad people. All that changes is the political and economic climate. Bad times, when people cannot work, cannot earn a living, the climate is ripe and right for the haters to rise again. Good times when a man can go sailing on a Sunday and mow his lawn in his fancy car-like lawnmower ...these are good times for peace, love and understanding. We need to be prepared for both.

Today we remember Karl Plagge of Darmstadt. Born 10 July 1897, passed on 19 June 1957. He is honored by Yad Va Shem in Israel as a Righteous among the Nations.

Originally a Lutheran, Plagge lost his belief in God as a result of the atrocities he witnessed during the Holocaust.

During his denazification trial, Plagge stated that he was initially drawn to the promises of Adolf Hitler and the Nazi Party to rebuild the German economy and national pride, which suffered during the years that Germany experienced after the signing of the Treaty of Versailles. Between 1931 and 1933, Plagge worked as a local organizer for the party. He came into conflict with the leadership of the party after 1933, when Hitler seized power. According to his later testimony, Plagge refused to accept the Nazi racial theories, which he considered unscientific, and was disgusted by the persecution of political opponents and the corruption of many Nazi functionaries. Instead of leaving the party, he attempted to effect change from within, accepting a position as a scientific lecturer and leader of a Nazi educational institute in Darmstadt. Because of his refusal to teach Nazi racial ideology, he was dismissed from his position in 1935. A local party official accused Plagge of being on good terms with Jews and Freemasons, treating Jews in his home laboratory, and opposing the Nazi boycott of Jewish businesses, threatening to bring Plagge before a party tribunal. Instead, Plagge ceased his activity with the party, disenchanted with Nazism.