As time goes on we are able to do less things, and we are allowed to do less things, (cut must down on many kinds of foods, certain activities are now too dangerous). So we soon discover that the aging process is not so much fun. As one of my older relatives said, "Aging is not for weak of heart".

One of the things that we must eventually give up is sports, and, martial arts. I recall when my dad's doctor said, "Rabbi, it is time to give up baseball and take up golf." Of course my dad, refusing to grow old, rejected the silly doctor's advice. He played baseball until his body would no longer allow it. When I was a green belt a doctor looked at my elbow, damaged from a Jujitsu arm-bar, and said, "Your martial arts days are over; it is time to find another sport." I followed my father's path and ignored the doctor.

Martial arts; some are designed for the young and athletic while others have evolved to become more suited for older people. Tai chi is generally practiced by older people while MMA and Taekwondo are practiced by the young.

There are certain sports reserved for young people. No one expects to see a 45 year old playing professional baseball or basketball. At this point they should be on the side line with a big belly, serving as a coach and telling stories from their glory days.

Krav Maga is not a sport, and I am not even sure if I want to include it as a martial art. Krav Maga is about survival, period. If you can survive by outrunning, out smarting, or outfoxing the assailant – great. You do not need to put him in an arm-bar. No matter what you do you will not be awarded a trophy. Your only trophy is getting home safely.

As such Krav Maga cannot be limited by age. When people contact me and say, "I am 54, can I learn Krav Maga, or am I too old?" I respond, "If a 54 year old cannot learn Krav Maga then I would not bother teaching it to anyone, at any age." 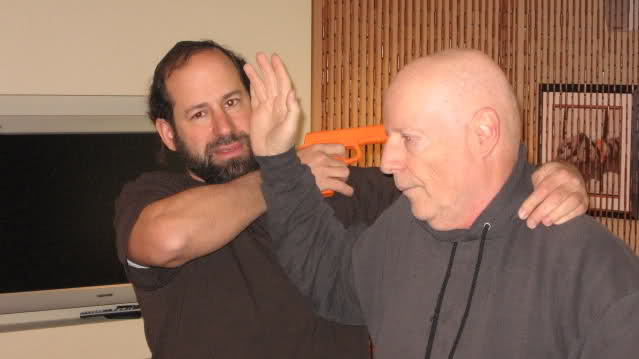 Moshe Katz with Prof. Arthur Cohen, two 'not so young' martial artists, but still....able to fight.

The techniques of Krav Maga are designed so as not to require tremendous physical ability. Speed, muscular strength, and flexibility are not what will determine your success. Rather it is about understanding the concepts and developing the proper mind-set.

Changes as you Change

Krav Maga changes as you change. When I teach Krav Maga to first grade students (ages 6-7) it is mostly mind-set, attitude and awareness along with a few very simple techniques.

When I was a child all these aspects were ingrained in me from the earliest age; do not pick up any objects from the floor, they could be small bombs left by Arabs. Anyone can be a terrorist, be careful, do not wander to unknown areas. The fear and threat of terrorism was so real (as it still is today), that it shaped my every thought.

As the child grows older he will learn more techniques, but still everything remains gross motor, simple and direct. The older students, young men of army age, will incorporate some kicks and more aggressive striking.

As the Krav Maga practitioner ages so will his training mature. He will focus more on vulnerable points, hit and destroy rapidly, get away as soon as possible. The techniques will require less physical strength and more smoothness. The older practitioner will learn to rely less on his muscle and more on this "flow". His movements will become more natural and involve less exertion. Krav Maga grows and adapts as you age, just as you do. As long as you can still get around on your own – you should also be able to defend yourself, and I have heard many stories to his effect.

To paraphrase the great Abraham Lincoln; God loves imperfect people, that is why he created so many of us. Our is designed for the imperfect. If I had brochures they would not be like those of other organizations, they would not feature perfect bodies, body building champions and beauty queens. These images create an illusion of perfection. Our style of Krav Maga will not make you perfect but it will show you how to use your imperfect body to cope with difficult situations.