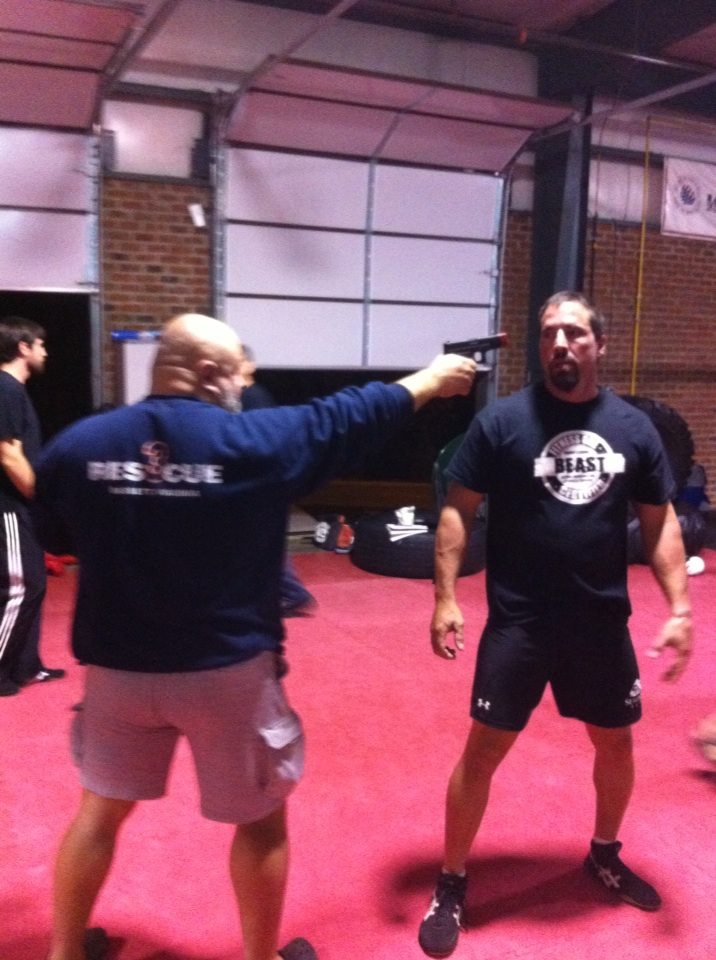 IKI Instructor Gary Hodges and Moe, South Carolina, 2013. Keep reviewing the basics, they will save your life. Gary has used this techniques in real life confrontations.

I grew up on the Israeli comedy trio, "HaGashash Hahiver". They had one scene in which one of the guys was preparing for his drivers test. "OK" said Shaike, "Lets' begin, question number one."

"You can skip question number one" says Gavri, "That one I answered blind."  (i.e. I can answer that in my sleep, it is easy, we can skip it)

Well, you cannot start with question number two. You must start at the beginning.

With Krav Maga I often find that people want something new and exciting, or perhaps it is just me, that I want to arrive for each seminar and have new and exciting techniques to offer. But what I often encounter is that we need to review the old and basics. We have to go back to the basics.

Now I look at a technique and I see that the defender is thinking "part two". i.e. rather than focusing on doing the first part well he or she is sort of skipping the first part, just glossing over it in their hurry to get to the second part, the more exciting part. This cannot be done.

Allow me to explain; Take for example a knife attack. The first part of the defense is a solid block. After the solid block we flow quite naturally into other movements designed to control the opponents' arm, counter, etc.

What I often see is that the first part, the main part, the block, is given "token consideration", glossed over quickly and the defender goes on to the lock or trapping.

What people do not realize is that the first part is key. Without doing the first part the rest just falls apart. In our knife defense example with the block there is no technique. The second part will never happen. The block is the stopping power, the shock to the attackers' nervous system. You cannot take this part for granted. You must focus on this.

In practice this does not usually happen as the attacker is playing along and not really attacking. Thus the illusion is created that the defender has done an adequate defense, which he has not.

All the rest will fall into place but the first part - You must work on this.

Experience Israel for the first time, like never before. Krav Maga, Jewish history, the past and the present...with intensive Krav Maga training.