Study history. Study it well. Why? because you must.

You must make the study of history part of your life because otherwise you will be a gullible fool who believes everything.

A old man, a former member of the Hitler youth, Hitlerjugend, said, "We were kids, we were taught to believe what we were told, so our teachers and parents and church leaders all told us that the Jews were bad, of course we believed them, what shouldn't we?"

Study history and you will understand how things work and what matters.

We look at the tragedies of history and we wonder, why didn't anyone stand up?

Well we look at America today and we see the terrible things going on and we wonder. And we wonder about Europe and about ISIS and all that stuff...

But who stands up against injustice, who tries to make a difference?

The Jews certainly did not go "like sheep to the slaughter", that myth has long been laid to rest. But many Jews, most Jews, were simply not prepared, but some were.

One of the greatest uprisings was the uprising at the death camp Sobibor.

Sobibor was a death camp, a factory designed to kill human beings, mostly Jews. It was located in occupied Poland. Nearly all traces were destroyed by the Nazis before they left.

Sobibor, to here came the Jews. Forced from their homes in France, Poland, Germany, the Netherlands, Czechoslovakia and the Soviet Union, as well as many Soviet prisoners of war, they came in cattle cars.

The number of Jews murdered here are estimated at a minimum of 250,000.

It was a very efficient camp.

"In 2014, excavators discovered a pendant inscribed with the word "Palestine" in Hebrew, English and Arabic dating from 1927, earrings, a wedding band bearing a Hebrew inscription and perfume bottles that belonged to the Jewish victims. The items were found in a cistern sealed off by the Germans during the liquidation of the camp. Remains of the gas chambers were unearthed under an asphalt road in September 2014"

(by the way here is another proof that Palestinian meant Jews, only recently has Arab propaganda convinced everyone that Palestinian, from time immemorial, have been Arabs, hogwash - study history!) 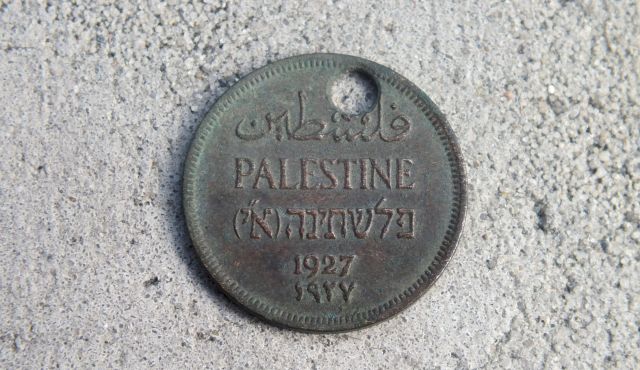 A pendant found at Sobibor. In Hebrew it says "Palestine, (Land of Israel) 1927). Clearly the person who wore this had either visited Israel or hoped to. A Palestinian was a Jew. The Jew were owned this was gassed to death. No Arabs were killed at Sobibor. The Arabs were allied with the Nazis.

Sobibór was the site of one of two successful uprisings by Jewish prisoners in a Nazi extermination camp; there was a similar revolt at Treblinka on 2 August 1943. A revolt at Auschwitz-Birkenau on 7 October 1944 led to one of the crematoria being blown up, but nearly all the escapees were killed.

Polish-Jewish prisoners began to organize an underground movement, the goal was to escape, to bear testimony of the atrocities, to teach the lesson to history so that future generations should know the truth, (which almost no one bothers to read!)

They got a sudden boost. In September 1943, the Sobibór underground was reinforced by the arrival of Soviet-Jewish POWs from Minsk; these Jewish war veterans were tough. The Soviet army produces some pretty tough fighters, but more than that is the attitude!  They had a fighting mindset, they were not ordinary people, they had the "Krav Maga mindset" which we seek to develop in all. While others are cowered into submission people with the Krav mindset rise to the occasion. As I stress in my book, "Israel: A Nation of Warriors" we do not say, "What can be done?" we say "What shall we do?"  We take action.

On 14 October 1943, members of the Sobibór underground, led by Polish-Jewish prisoner Leon Feldhendler and Soviet-Jewish POW Alexander Pechersky, covertly killed eleven German SS officers and a number of camp guards. Although their plan was to kill all the SS and walk out of the main gate of the camp, the killings were discovered and the inmates ran for their lives under fire. About 300 out of the 600 Sonderkommando prisoners in the camp escaped into the forests.

Krav Maga must become the national way of training and thinking. When each individual thinks as a warrior the nation will look differently.

When we think as warriors we see things differently, we perceive danger and make preparations. We are not fooled so easily, we do not believe the sweet promises of leaders, we question and demand answers and we prepare for the worst.

Trapped in a death camp, the tough Soviet Jewish soldiers planned to kill every SS guard and then fight off the Ukrainian guards and then escape across a field filled with mines, and they succeeded!

That is how a warrior thinks.

Israel: A Nation of Warriors
By Moshe Katz
eBook

Discover the Israeli warrior mindset, the people who created Krav Maga. From the first fighter Abraham to the IDF warriors of today. What makes a warrior?

Join us for two weeks that will change your life. Immerse yourself in Krav Maga training and Jewish history. Gain the experience.