Krav Maga Organizations
Are They All the Same?

The following is taken from a private letter written to me by my student, IKI Black Belt Instructor Juergen Kohler. I did not solicit these comments, rather they were his spontaneous reaction to a blog I posted recently.

I share his letter with you in its entirety, however in keeping with IKI policy never to mention another Krav Maga instructor or organization in any negative light, I have omitted the names of the instructors and organizations that Juergen sites. They do appear in his original letter. The only exception is my friend Itay Gil. 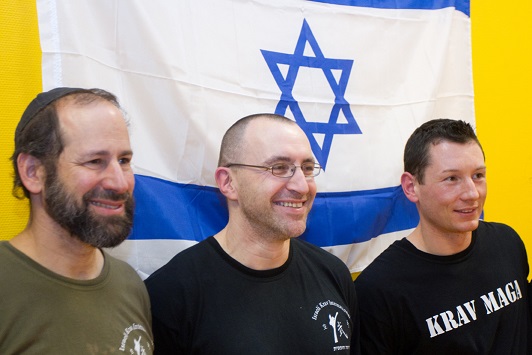 Are all Krav Maga systems the same?

Are all Krav Maga systems the same? No, they are not, some, so sadly, resemble fancy martial arts forms and, for the life of me, I cannot figure out how they became so popular and why people continue to believe in them.

Again: thank you for this great blog.

Well, you ask how is it that people continue to believe in them ... the answer is easy.

I will try to explain it from my own personal experience.

Years later XXYY and XXMF become popular in Europe. Than 1234 Krav Maga with Poni CCVVB . All these organizations had and have a very successful marketing.

Look at their DVDs ... you can see action, well done techniques (but you can not learn anything on these DVDs) ... than: Human Weapon “Krav Maga”.. Zoni Iuuup seems to be a fantastic hero, IKXX looks so great.

When I started Krav Maga ... I recognized some technics are like IKXX and WKXX .. so I continued these styles. Than I saw FDffi LLVM ... his “Krav Maga” is very near to Karate.. so it is near to me (Black Belt Karate and Taekwondo).. I was tested as a Black Belt in Krav Maga which is similar to Karate and Ju Jutsu .. I became 3rd Dan Black Belt

In 2008 I was in Israel ... visited Itay Gil, trained with Mklk plplp “Kapap”, Dssss ffrrfr “HXYXYt”, and with Adi Fiv XXKI Krav Maga. Now I saw a other “face” of Krav Maga. I was a bit confused because all these styles are not what I learned before. I felt like the man in your blog. I came as a black belt – but especially my gun defense didd not work! My Arm-bars which work in the dojo 100% .. suddenly they are only shit. I was “killed” so many times.

In 2010 I joined your Seminar at Stadthagen, Germany ... and there I saw the real Krav Maga. You taught us, what Itay told me ... Krav Maga is not traditional!! Imi Lichtenfeld style is old-fashioned and it does not work any more. You taught me techniques which are not “Karate-Maga” or “Krav Jutsu”.. no fancy Kicks like van Damme (or XYZ Krav Maga, or WXXF)

Today so many people believe in Combat Krav Maga, and all the other styles – because these styles have a very professional marketing. AND these styles are similar to Ju Jutsu/Karate , ... that makes it easy to start.

BUT if the people see real Krav Maga ( IKI Krav Maga) they are impressed with this style, which works and which is so easy to learn. Look – I am a 3rd dan Black Belt Krav Maga...since 2007. But in 2013 I earned 1 dan Black belt IKI Krav Maga. ... and this 1 st dan is so important for me.!!! Yes 3rd Dan sounds better but 1st dan IKI is better

Join Moshe and Juergan for a seminar in Germany...

Location: Koenigsbach (between Karlsruhe and Stuttgart) .. about 45 min. away from France, about 2 hours to Switzerland 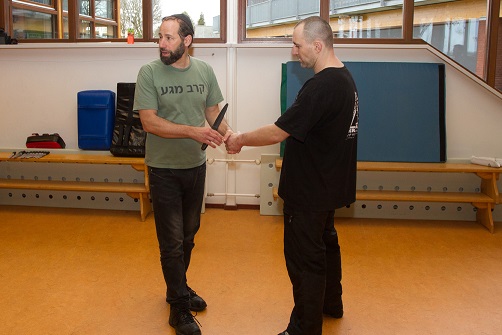 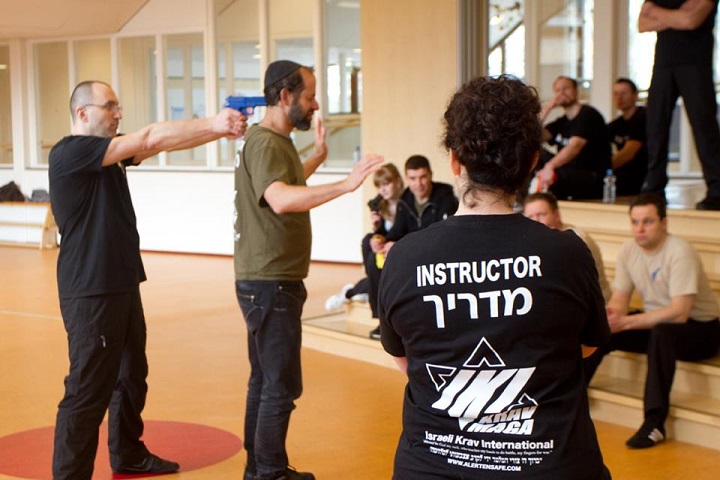 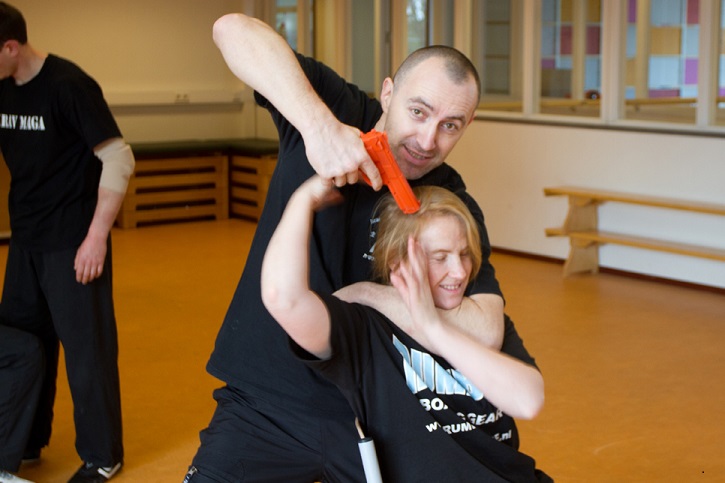 Very serious, but also fun, with Iris from Utrecht.

We are open to all questions, all situations, all techniques. Now come and learn...