I don't care much for fashion, it is simply not part of my life. In fact I have always considered the entire topic a very frivolous, shallow matter. Of all human activities, the question of clothing is one of the least important to me.

However, I was on the plane and something in the US Airways magazine caught my eye; it said, "Must Read"(literally) and it said, "Clothes matter for many reasons". Ok, so to pass the time I started to read.

A woman was writing about a red high-heeled shoe, a shoe from the past. She did not know whom it belonged to. She tried to imagine the woman who wore it and under what circumstances she bought it. And then she writes, "The Red high-heeled shoe exists. You can see it for yourself if you travel to Poland, drive a couple of hours west from Krakow, and visit the Auschwitz museum."

Now you got my attention.

Linda Grant describes that this was one of the countless shoes left behind by Jewish victims of Nazi Germany.

"So someone arrived at Auschwitz wearing, or carrying in her luggage, red high-heeled shoes, and this shoe is all that is left of her. When I visited Auschwitz, I was transfixed by this shoe, for it reminded me that the victims were once so lighthearted that they went into a shop and bought red high-heeled footwear, the least sensible kind of shoe you can wear.

They were human, fallibly humans, and like us; they took delight in the trivial joys of fashion. This anonymous, murdered woman, who died before I was born, would surely have bought her shoes in the same spirit that I bought mine."

Wow, suddenly a frivolous article about high-heeled shoes becomes a testimony to the humanity of our people, a reminder that the people whom the Nazi viewed as sub-human were in fact very human. The high-heeled red shoes, of all things, becomes their statement of humanity, their silent protest against the evil dictator, the Führer and his evil associates.

I thought about Hadassah, an Israeli female soldier I often take shopping. She came home on leave from the IDF in military uniform, carrying an M- 16 rifle, sleeves rolled up, tanned from endless hours in the field commanding her troops, and she would tell me, "Now Moshe, what I need today is blush, eye shadow, and mascara."

I laughed, she wondered why. Here she is, Miss G. I. bad ass Israeli Jane, and she needs all this girly make-up stuff.

Now I get it. Like the single red high-heeled shoe in Auschwitz, the only remains of a murdered woman, Hadassah needed this makeup. It was a testament to her humanity. Despite the fact that our enemies put us in a position that all our young people, even our girls, must serve for years in the military, they still retain their humanity. Hadassah must serve and carry an M-16 rifle but she is still a beautiful young woman, she still cares about her appearance, she needs mascara.

All the attacks and all the guns and bombs cannot take away the fact that she is a young woman. And yes, the frivolous make up, just like the impractical high-heeled red shoe, is a very important testament to her, and our, humanity. Our enemies cannot take that away from us. From the frivolous world of fashion I have learned a valuable lesson.

Hadassah represents what we call the "Warrior/Beauty", the delicate balance between our national obligations and our individuality. I am reminded of the British girls in World War Two who drew lines on their legs to make it look as if they were wearing stockings they could no longer obtain during war time. Why think of stockings during war  time? Because it show our humanity, it is a form of spiritual protest: I still matter, I am still human, you cannot reduce me to anything less.

From the year 67 C.E. until the year 73 C.E, nearly 1,000 Jews held out in the Judean desert at the fortress known as Masada, against the thousands of well-armed Roman soldiers. If you visit the museum at the site (which we do during our Tour and Train Krav Maga program) you will find, that among the artifacts and remains of these 967 Jews were make-up kits. Yes, there were clear signs of women's make-up utensils, eye liner, a brush etc. Holding out against the cruel Romans, stuck for years on the top of an isolated desert mountain, the women of Judea still cared about their appearance, and applied make-up.

In life we must find our balance. Krav Maga is about self-protection and protection of others, and is vitally important. However, if we forget to enjoy life, to be a little bit frivolous from time to time, than we have lost part of our humanity.

In the encounter with Eliyahu the Prophet (Elijah) we hear about the thunder and lighting, and the powerful winds. And then we hear about the "Still, small, voice", and we learn that "God is in the still small voice." That high-heeled red shoe in Auschwitz is one form of the still small voice, the protest against brutality. The female soldier needing make-up is a protest against endless war, suicide bombers and rockets launched against our civilian population. The shoes and the make-up are part of our struggle for humanity. 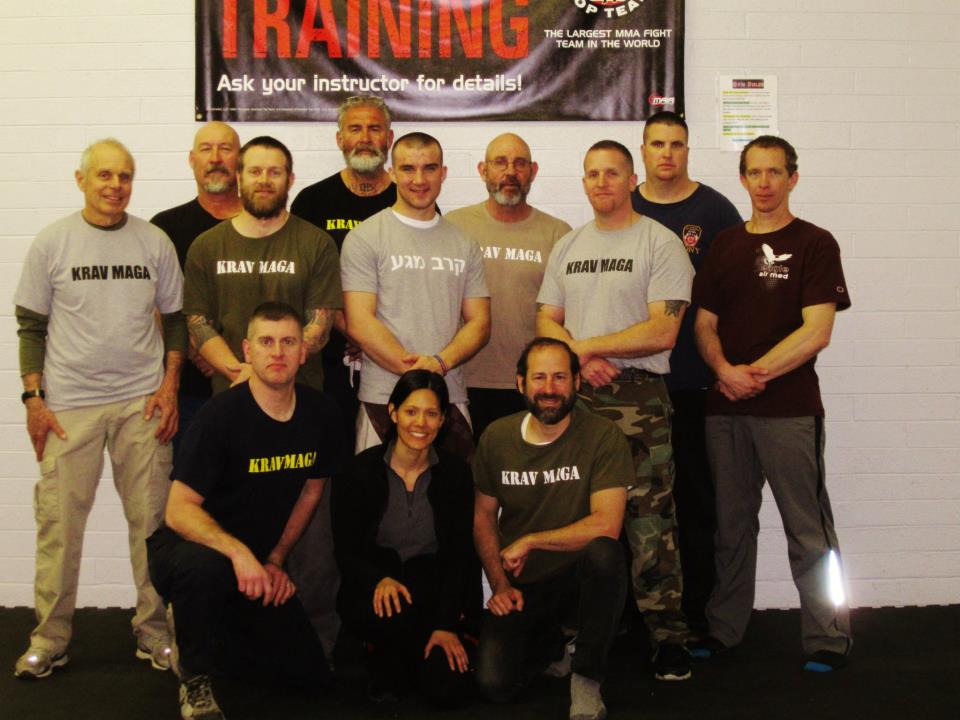