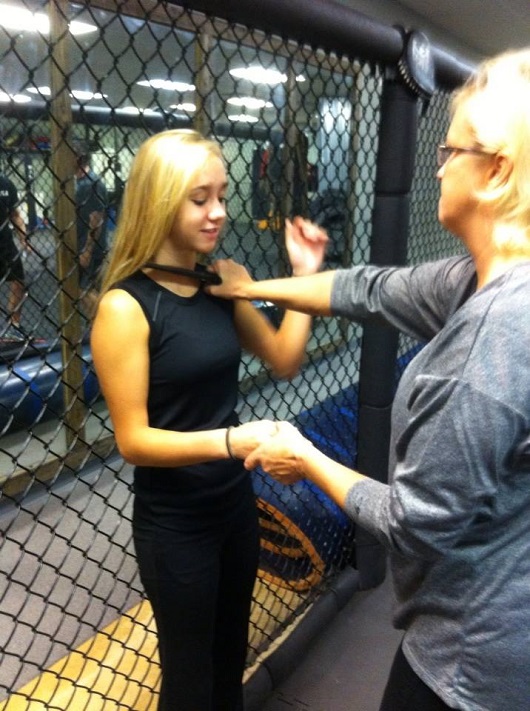 Mother and daughter, we keep the techniques simple but they do require a certain amount of repetition.

I was feeling troubled.

A technique that I thought was simple and clear was apparently not so clear to a student who lives far from here. The student declared the technique inadequate.

I examined the technique, I reexamined it again and again and found it to be solid. I was troubled.

Why didn't the student see this? He was not a beginner. Troubling.

Sitting in the synagogue is always a relaxing and comforting experience, I find it balances me and puts everything into its proper perspective. There is really no place I would rather be.

I find that whatever troubles or challenges I am experiencing have already been dealt with by Moses and Aaron, Joshua or David.

After the regular service we always read a chapter from Menorath HaMaor, The Candle Stick of Light written by Rabbi Yitzchak Abuhav. It is one of our more recent works, composed during the 14th century.

As I was sitting with my friend Yigal sharing the book, Rabbi Yinon read the words...It is told in the Talmud...Two rabbis, Rabbi Hiyya the Great and Rabbi Yonathan were walking at the funereal of Rabbi Shimon son of Rabbi Yossi and having a dispute about those who have passed on. The question was: How much do the dead know of our daily affairs? How much do the spirits of the deceased know about what we, the living, are doing?

The younger rabbi quoted a verse "For the living know that they shall die but the dead know nothing". (Ecclesiastes, Chapter 9, verse 5)

The elder rabbi responded: "If you have read, you have not doubled (read a second time), if you have doubled you have not tripled, and if you have tripled they have not explained to you the proper meaning of the verse".

Rabbi Hiyya the Great continued to expound the verse and correct the younger rabbi.

And it hit me! The answer came to me and I was calmed. Although my student had been trained, although he had a great deal of experience, like the younger rabbi, he was still "not there".

Walking home from the synagogue I continued to ponder those words, written hundreds of years ago and quoting an incident that took place at the end of the second century. Rabbi Hiyya was born in Babylon near the village of Sura.

I recalled my days training with Itay Gil. Three times per week, I attended all three lessons each time. And it was always the same. First 20 minutes running, situps, pushups. Next two minutes: 20 low kicks each side, 20 middle kicks each side, 20 side kicks...

Same lesson plan. Same techniques. And I did it 3 times per day, 3 times per week for 18 years. Itay used to tell students, "As I know the sun will rise tomorrow I know Moshe will be on the mat". And I became good.

I never missed a lesson. I never turned down a fight. Never!

That is the way to learn, not...I tried it a few times and I don't think it works. If you tripled you still need to have it explained to you...said Rabbi Hiyya the Great.

In the old days a student became an apprentice. You wanted to learn a trade you lived with the master. You worked for free. You mended shoes, you fixed things, you learned from a master craftsman.

Today you want to learn plumbing? You bind yourself to a master pluming guy and you sit next to him in the truck, day in day out. And you observe him, you work side by side.

A lawyer must go through a period of being an intern, although he has already graduated successfully from law school. Same for a young doctor. He must work side by side with an older experienced doctor. That is how you learn your trade.

The answer is profound, "For they have not served the master sufficiently".

Not...they do not know the text, not...they are not intelligent enough, but they have not spent enough time with their teacher. Learning is not only watching a video, not only reading a book, but spending time getting to know and understand your teacher.

And the key element of our tradition is...Ask!

As the wise rabbi said..."In this academy we do not judge students by their answers, we judge them by their questions".