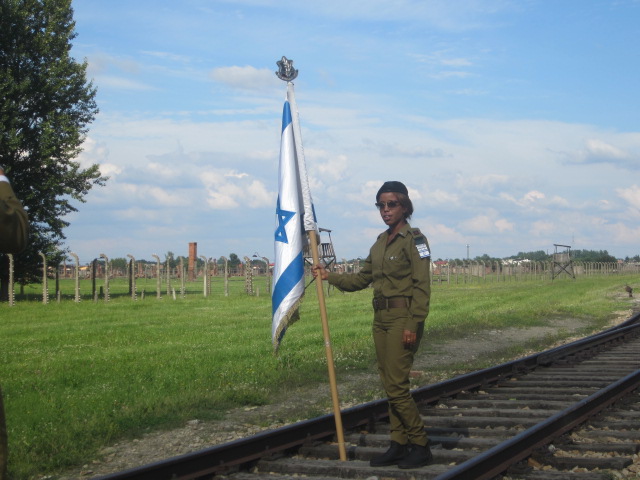 An Israeli soldier holds an Israeli flag at Birkenau (Auschwitz) concentration camp. A symbol of what we have gone through as a nation. 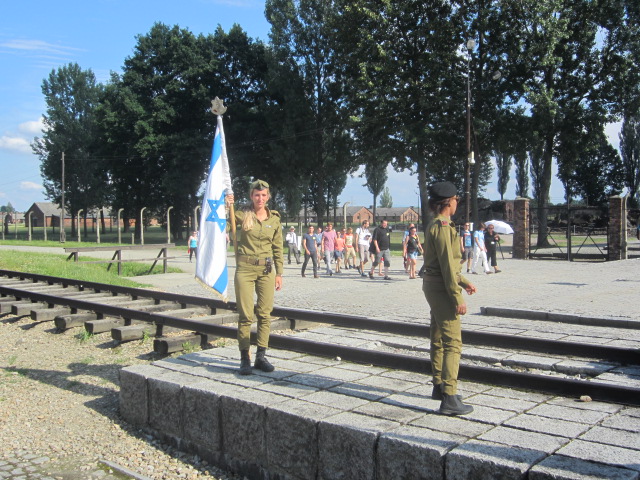 While our source is Israel, our technique are influence by our international experience. IKI Krav Maga is currently taught in over 40 countries worldwide.

We gain from our encounters with students from all over the world. The interchange of ideas increasing our knowledge beyond what one could gain from training in a single environment. Each country has its own culture of crime and violence, its own unique attacks and strategies. Each nation has its own history which influences the nature of its attacks. IKI takes the Israeli principles of Krav Maga and adapts them to create solutions for violent encounters all over the world. Many police units have adopted our methods.

We learn from every situation. We give to the world and the world gives to us.

Anyone can learn Krav Maga but you must remain connected to the source. The source of Krav Maga is Israel.

Below are a series of lessons I have complied, drawn from Israeli military history, living in Israel, and growing up with the never ending war and terrorism. I apply all of these concepts to our style of Krav Maga: IKI Krav Maga.

1. We are in an ongoing state of war. This is a war for survival, not expansion. All our wars are defensive wars, and are part of one ongoing war. In this ongoing war there are several short term intensive wars. But there is never a state of peace.

2. The constant state of warfare gives us the advantage of regular analysis. We have the ability to evaluate real time all aspects of defense and adjust our strategy accordingly.

3. We must be completely honest in our self evaluation and in our review of success/failure. There is no room for bravado or false self-praise. Mistakes must be acknowledged. Lessons must be learned.

4. We are operating from a weaker position; smaller territory, smaller population and resources to draw upon, less time to prepare for war, difficult international position; If we succeed, the world immediately pressures us for a ceasefire to prevent further successes on our part.

5. Wars must be kept short, we have little "air" to maintain a long battle. Taking too long means the loss of the state and our independence.

6. We are a small country and we lack strategic depth. In other words, we have little room for retreat or mobility, we cannot absorb many blows. The ability to retreat is limited at best. Thus our slogan is "Kadima" Forward.

7. In order to succeed we must have unity. Unity of the armed forces, unity of our civilian population, unity of our brothers worldwide.

8. We must build a strong deterrent force, our aim must be to prevent a war.

9. A battle, or war, ends when both sides realize they have more to lose than to gain at this point. We must convince the attacker that he has much to lose and little to gain by continuing his attack on us. We must create a situation where the enemy realizes that that the danger of ongoing war outweighs the risks.

You must always be aware of your enemies fighting spirit and morale.

11.  We must know as much as possible about our enemies, their abilities and tools, strategies and objectives.

In 1973 before the Yom Kippur War, Egyptian president Anwar Sadat announced that he was willing to sacrifice a million Egyptian soldiers in order to achieve his goal of restoring lost Egyptian territory. Israeli intelligence dismissed this as rhetoric. After all, it makes no sense, we would never do that! To us each life is a world, each life is a family, every life is sacred.

The Jews in Europe judged the Nazis rhetoric on their own value system and logic. "They will never kill us all, it makes no sense, they need us for the war effort. It is illogical to kill productive workers."

But the Jews did not understand the Nazi Value System, that genocide was more important than the logic of work productivity. Misunderstanding their value system lead to incorrect conclusions and actions.

Decent hard working people might feel it is "illogical" for a criminal to kill for $10. It makes no sense; why risk jail for only $10? But we are imposing our value system upon their behavior and therefore putting ourselves at risk.

We have to view the situation from the perspective of the enemy, not from our own Value System. Do not assume that the enemy is thinking the same way you are; they are not.

14. If needed, preemptive strikes must be taken.  If a war must be fought we should be the ones to choose the timing.

15. In Combat we must achieve an immediate psychological advantage over the enemy. In 1948 this was achieved by young Israel despite not having the army to back it up. Powerful surprise attacks, sometimes using devices that only caused noise, gave us the psychological upper-hand.

17.  The defense and the attack must become one. The nature of an attack upon us means that we are initially in a defensive position. This must be turned into an immediate counter attack. Take the battle to the enemy.

18. Our strategy must be to weaken the enemies resolve to fight. We must weaken his ability to fight, we must break his balance, destroy his confidence.

19. We must focus on the enemy's vital points. We do not have time to attack every aspect of the enemy. We must identify the Vital Points and attack those. In the 1973 Yom Kippur War the airfields were not vital points while the rocket launchers were. The Israeli air force did not have the ability to attack all key points on two fronts (Egypt and Syria), it was essential to make a correct choice as to the enemy's most vital points.

The same is true in hand to hand hand combat. You cannot attack every point on the body, you must identify the vital points and focus on those.

20. Identify real threats. If something or someone is not a real threat, do not devote scarce resources to it. In 1973 Israel attacked Egyptian air fields that were not a real threat . In the process they wasted vital time, missed other opportunities and lost two dear pilots and two valuable combat aircraft.

21. Yesterdays' success is history and is no indication of future success. We must always prepare for the next war while drawing lessons from the previous wars.

22. Humility - Never underestimate the power or ability of the enemy.

23. Never exaggerate your own abilities. Never assume that what you achieved in practice can be duplicated in actual combat.

24. All weapons, techniques, training regimes, strategies, must be constantly evaluated. For example between 1967 and 1973 the Israeli air-force was completely revamped; new aircraft, new bases, new methods of selecting pilots and new methods of training.

25. Our fighters must establish physical and psychological superiority.

27. We must accept that "the few against the many" is a give that will not change.

28.  Our soldiers must know their tools, their weapons, intimately.

29. Our soldiers must be balanced man; social men, aware of their own self-worth, proud of their work and their abilities, brave, independent personalities, willing to take risks. Men of discipline, a team players, human -beings and friends.

Even if there is a contradiction between discipline and initiative taking, the commander must bridge the gap.

30. Understand that in real combat nothing can be expected to go as planned, as such all of the above must come into play; a superior warrior, an adaptable flexible warrior who can initiate and think on his feet.

In 1970 both Israel and the United States could not conceive that the USSR would participate in the Egyptian - Israeli conflict. Clear intelligence was gathered proving that this was the case. Both nations ignored this information for five months as it did not fit their expectations. Not until Russians planes were flying over Israel did the "Penny drop".

All things change. He who does not change is quickly left behind, in combat and in life.

33.  Survival is not a given. The danger of being terminated is real and constant. If your survival is important to you, you must never lose sight of this fact.

These are the principles by which we live.

IKI Krav Maga is based on these principles.

All of the above principles can be applied to Krav Maga. While a war is between nations, and Krav Maga is between individuals, the principles are the same. Our mindset and approach are a direct result of applying these principles.

I had a friend who had been very fat. She kept a "fat photo" of herself on the refrigerator, she needed a reminder of the reality of the situation she never wished to return to.

We, the Jewish people, have such a photo. I grew up seeing adults' with numbers tattooed on their arms, long before tattoos became popular. I knew what they meant. I grew up hearing stories.

I saw ancient Crusader fortresses and heard stories about how the Crusaders massacred and decimated the Jewish population. I heard and I read.  When we fight, we know what we are fighting for. We never want to go back t the way things used to be. That is not an option.

To be part of our evolution and growth you may join  IKI on line and become part of the process. You will receive Krav Maga training video clips directly from Israel.