If I am traveling to a foreign country and I need to speak the language, I will make every effort to at least handle the basics so that I can communicate and make myself understood. Yet many people consider learning a foreign language, in particular in our later years, as an impossible and futile act.

I do not consider myself at all gifted when it comes to leaning foreign languages, or anything for that matter, but I have a system.

Years ago I was tutoring a young man named Doni. He was very bright but not the most dedicated student. In fact when I was called up one night to tutor him he told me that he had a final exam the next day. However, the text book for the course was still in the wrapping paper, having never been opened.

What could I do?

Doni was and is a real go getter. He said we have give bottles of coke, plenty of snacks and one night, let's do it. And we did. Doni earned a score of 89, not bad for having not studied the entire semester. How did we do it?

I myself was not familiar with the subject matter, as it was a course that I had never studied, but I know how to study. I looked at the thick book and realized there was no way to study the entire text in one night, let alone remember it for the exam the next day. What I did was scan the book for the most important topics. There was certainly no time to cover all the topics, so I focused only on those that seemed most likely to appear in the exam.

Next, within each topic that I chose I focused on the main points. I made a system of "Bullet points". We studied those central Bullet Points and then gradually added some meat to them, i.e. enough details to make it work. He earned a very respectable grade.

That is the same way I study languages. I chose the terms that are most likely to come up in the circumstances that I will face. I will be teaching Krav Maga so I learn, front, back, side, right, left, punch, kick, block, knife, gun, stick etc.

I study basic greetings. I can say I am happy to be here in many languages. I create a system of key words, similar to Bullet Points and then I gradually build up a little around them. I have not had the time to master any languages, no time, but I have taught seminars in Italian, Spanish, Portuguese, and German.

The same philosophy that I use with languages I apply to Krav Maga. If we look at all the possible violent and dangerous situations we might face, it is like looking at the text book of hundreds of pages, still unwrapped the night before the test; there is no possible way we can cover it all.

Thus we cannot cover every possible situation. So we take the most common situations and we study the basic thread that runs through all of them. We look for the Bullet Points: the basic punches, the basic knife attacks and gun threats. And then gradually we add some meat, a few more details and how to apply it to many diverse situations. Thus we have a system that is

Yes, it is a faster way, and it is a more effective way.

To master a foreign language like Russian, or German with all its rules and exceptions to the rules and dialects and intonations, would indeed take a great deal of time and even then many would never succeed.  So we take the key words, the bullet points and are able to communicate. Gradually we build on this until we can carry on a conversation.

It is the same with Krav Maga, if you try to grab too much you will grab nothing at all and in the moment of truth you will forget everything. So we have Bullet Points, a few simple ideas, we master these and then we add a little as we continue our learning journey. 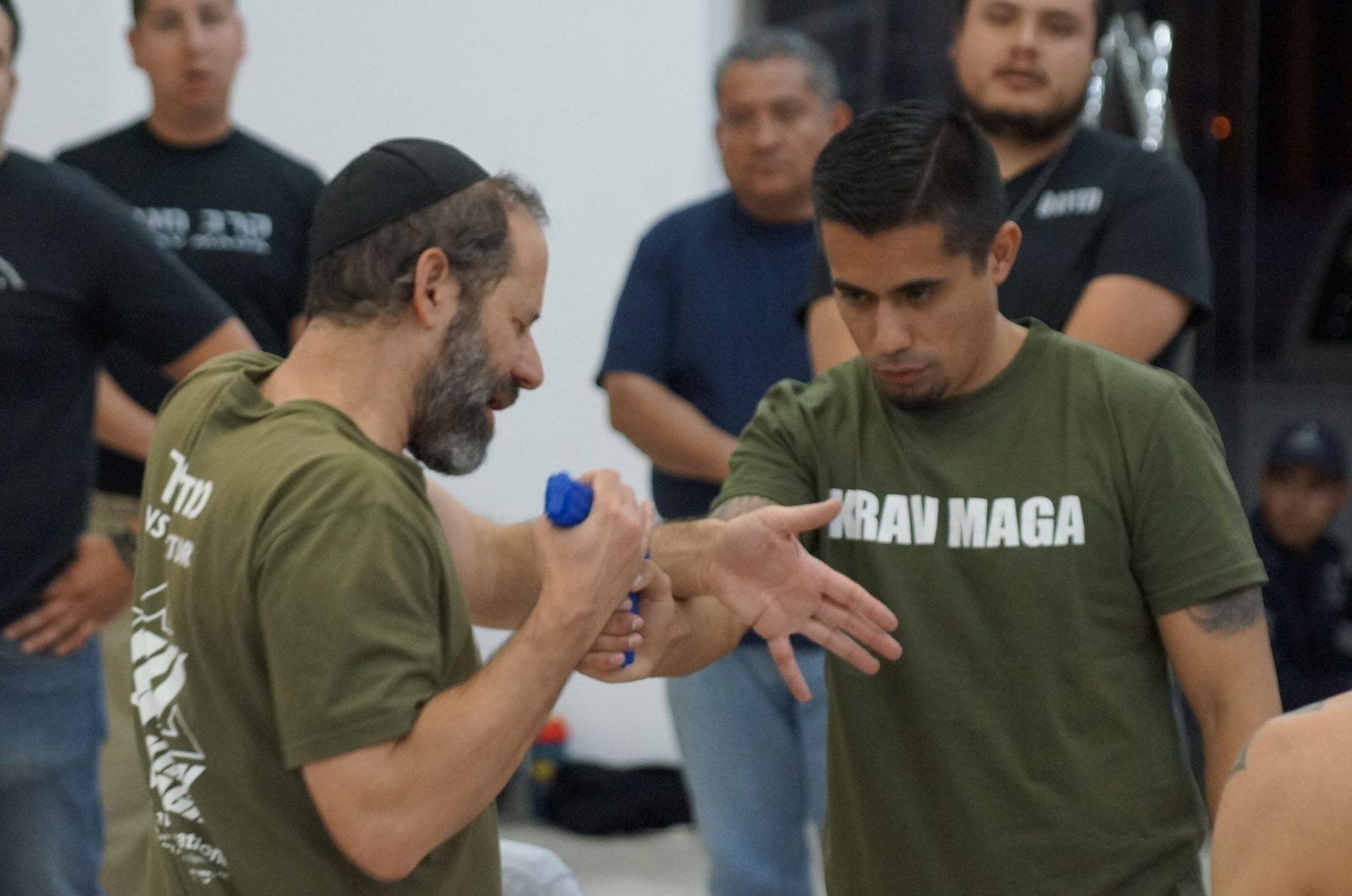 Moshe with Eduardo, teaching Krav Maga in Mexico in Spanish.