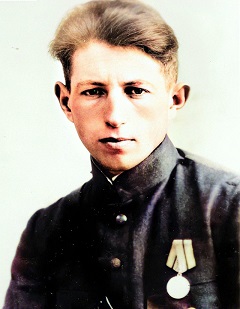 There is a line that he said in 1944 that hit a chord with me. But that will come, soon. First you have to meet someone special. His name was Leonid Berenshtein. If you ask people who he was, they will say, oh yes, a great composer, but no, that is Leonard Bernstein, similar but different.

Berenshtein passed away about a year and half ago at the age of 98, marking the end of an era. He was the last surviving partisan commander. His kingdom were the forests of Ukraine, Poland and Slovakia. His enemies were the Forces of Evil. Sit back and hear a story, a story about a superman, only it is real, every detail.

The year is 2019, an old man sits in his tiny apartment in the north of Israel, aided by a kind woman. He is in a great deal of pain, an old war injury still pains him. He is 98 years old. He has difficulty walking. It is a poverty stricken neighborhood. He wants to tell his story but he feels that no one really wants to listen, no one wants to hear about it anymore, it was all so long ago...a different world...

The year is 1921, the place is a town called Shpikov, or Szpików or Шпиків. This is Ukraine, in the Soviet Union. The town has been home to a thriving Jewish community, there was once the Shpikov Hasidic group. But things are not good for the Jews and the community dwindles. On July 15 a young couple, Chaim and Rivka Berenshtein, announced the birth of their son, he will be known as Leonid. He might as well be known as superman.

At the age of five, his father, a watch repairman, dies. With his mother he moves to Kiev. He grows up with anti-Semitism. At age 17 he becomes the boxing champion of Ukraine in his weight class. He learns that he must always fight for his rights, he solves problems with his two hands; nothing is free in this world. 1939 he joins the red army, in 1941 he graduates as an officer in the Krasnia Armia. June 22, 1941, the Nazis invade, Operation Barbarossa, the Ukrainian front is crushed. Leonid is there.  The Germans are coming, the commander calls for everyone to draw their weapons and prepare for battle: Podgotovit' Oruzhiye подготовить оружие . Boyu! бою!(fight); They are overwhelmed by the German forces. His unit is destroyed. He is hit badly, he falls into a state of unconsciousness. He wakes up a day or two later surrounded by the dead bodies of his comrades. He seeks shelter in the local village but soon the Germans come. He sees a local Jew being shot on the street. Before being shot the German solider says, "Jew, this is for you!" and shoots him at point black range.

Leonid flees the village and spends months in the forest, in the snow. Eventually he collapses from hunger and exhaustion. He is found by a group of Soviet partisans. He is trained to live in the forest, to ambush German trains and convoys, to do what must be done. Death waits after every corner, The partisans have a song...Death is always four steps away...

Leonid becomes a legend in the forest, but he is known as Volodya Vasiliev, he keeps his Jewish heritage a secret. Anti Jewish feelings are rampant among the partisans. Only the commander knows his true identity. When reports arrive recommending a Leonid Berenshtein for medals of honor, the officer in charge hides the reports, no one wants the Jews to receive too much recognition. No one likes an "uppity" Jew. During the war more than 500,000 Jews will serve in the Red Army, more than 200,000 will fall in combat or in prison. 306 Jews will serve as generals but the full Jewish contribution to the war effort will never be known. And some will say the Jews do not fight back.

But Leonid fights not for medals but to kill Nazis, the more the better. He derails 44 trains, sabotages German convoys and kills many. He becomes feared and respected. The entire war he fights with shrapnel in his leg. In his older years this will be removed, only after he moves to Israel, but the damage to his legs is permanent.

There is no medicine in the forest. Pain and death are constant companions. Leonid becomes commander, his unit grows. He continues to disrupt German supply lines. Soon he and a select group of fighters are parachuted into Poland. He must locate the site of the secret German missile development center. He must stop the Germans from developing and deploying a weapon of mass destruction that could potentially change the course of the war. Hitler is counting on his secret weapon to turn back the tide in his favor. But Berenshtein will defeat Hitler and destroy his new toy. Berenshtein locates the site and the Soviets bomb it. The V2 missiles are destroyed but the technology is saved and passed on to the allies.

Leonid sits in his apartment in Israel and remembers...he is asked, do you ever think of your partisans, your comrades? Yes, Da, they are always with me. It was my great privilege to fight side by side with them in the forests. His aid helps him up to his feet. An old forgotten man remembers. He escaped death many times. Three times he was captured and sentenced to death, each time he managed to escape.

In the forest they are seeking the location of secret German bomb factory. It is nearly impossible to find but eventually Berenshtein locates the factory just outside a little down called Dębica, ironically this was once a thriving Jewish community, a classic Shtetl with 75% of the population being Jewish. The town had rabbis and yeshiva students. None of this exists anymore. This Jewish life was extinguished.

Along the way the Partisans encounter unexpected experiences, they witness an entire village of Ukrainians who had been helping the partisans, go up in flames. Men, women and children are shoved into a barn and the place is set on fire. The hardened partisans are helpless and must avoid contact.

Later on they find an abandoned camp, the partisans do not know the nature of the camp, they think it may be a former prisoner of war camp,  but Berenshtein understands. He sees a child's shoe, and then he finds the remains of a watch. He turns it over, the writing is in Yiddish, it says, to my son on the occasion of his wedding, fun dayn tate (from your father). He lovingly puts it in his pocket.

Information reaches him about a nearby village, the last remaining Jews have been rounded up, over 100 men, women and children, they are being guarded and in the morning all will be shot. Berenshtein is told it is too risky to try and save them. he takes a small group of men and they invade the village. One by one they find the German guards, choke them to death, stab them. They are soon discovered, two partisans are shot dead in the conflict but soon the entire German garrison is eliminated. In the morning the Jews are greeted by the new leaders, the partisans. Berenshtein speaks to them. But first, he stares at them, a prolonged silence. He looks at them, his people, the condemned, the Untermenschen, the sub-humans, the undesirable.

I am the commander of the partisan group Pazharsky, Vorota otkryty (The gate is open), you are free to go. Ty Svobodena. (You are Free)  Those who choose to stay will receive weapons. You will become partisans, you will fight with us, side by side, perhaps that is the greatest freedom.

Not everyone was born to be a fighter. But we were all born to be free.  A free man chooses for himself, how to live and how to die. We say goodbye today to some of our comrades in arm, who were killed in action last night, our closest friends...Tavarish, Comrades, the gave their lives so that others can continue to live, the entire world now owes them an eternal unlimited debt. It is our honor and our obligation to always remember them, keep the memory alive for those who come after us and those who come after them.  Menya zovut Leonid Berenshtein, my name is Leonid Berenshtein, ya takoish k ye tipy, and I am one of you. On my shirt too there should have been sawn a yellow star of David (Nazi way of marking Jews), and I too made my choice. Perhaps soon, perhaps even tomorrow, we too shall meet the end of our lives. But death is not important, who we become is important, when we meet him.

There is little need to add to this, Leonid has said it all. We make our choices, how to live, to live on our own terms, we can choose to be fighters, we can choose to fight for our freedom, or we can allow ourselves to be led to our deaths. There are weapons for those who want, there is training provided for those who want. I am one of you, I have made my choice. Now it is your turn to make your choice.

Like Moses of old Leonid stands before his people and proudly declares his heritage, no longer hiding, he says I am a Jew! And like Moses he says, Behold I have placed before you life and death, the blessing and the curse, you are free to choose. Svoboda - Freedom!

Leonid died alone, destitute and forgotten...I want to fulfill his command, to remember, to pass on his legacy, to honor the memory of those who fell, to those whom we owe a debt that can never be repaid. 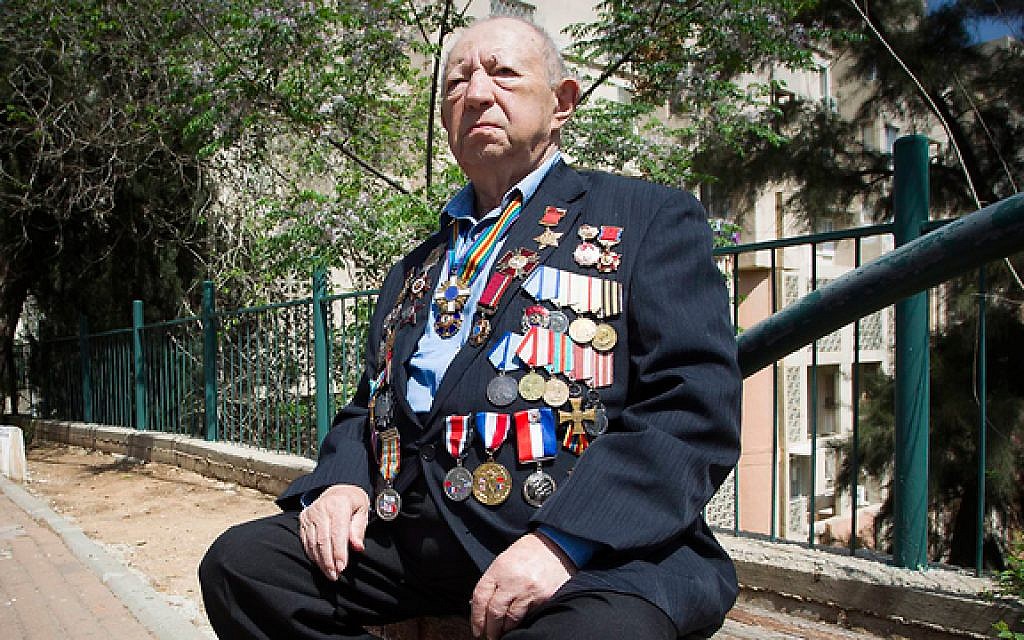 Leonid Berenshtein in his older years, memories and medals but forgotten and alone...