Man and the Tree of the Field
By Moshe Katz

This verse is a tricky one, one that is still debated today as to its true meaning. One classic idea is that the tree is not your enemy, a man is, but the tree should not suffer on account of war. Another view is that it means a man's life depends on the tree, for fruit, and he needs it to survive during war.

Another view is that while a man can withdraw into the besieged city a tree cannot. The tree cannot escape the ax but the man can escape the sword.(this is the view of the Aramaic commentator and covert Onkolos, first century, Israel. Rabbi Shlomo Yithaki of France concurs).

Rabbi Moshe son of Nahman (12th century, Aragon, Catalonia, Spain) offers several ideas including the concept that a tree, like a man, has a soul, not literally but conceptually. A man is thus compared to a tree.

While I was away in South Africa I received the wonderful news that my new grand nephew was born to the proud parents Liza and Arie. I was honored to be present at the ritual circumcision which is a Jewish practice dating back to the founder, the Patriarch Abraham. Since those days the circumcision, in Hebrew, Brith Milah, the covenant of Blood, has been the official "entry point" of a male to the Jewish people.

When the covenant takes place the boy is officially part of our nation (the same is true for a convert to Judaism). This entry into the covenant of Blood is an emotional and exciting moment.

This is also the time when the name of the boy is announced and the explanation given. It is a moment of great anticipation. And the name is...Alon Shimon son of Aryeh Yehuda the Cohen!!

What a name, what a powerful name!

My nephew whom you all know as the paratrooper who created the IKI logo, is Aryeh Yehuda (Arie) named for his great grandfather who was murdered by the Nazis. He is our victory over hatred. His son, (his second) has two names, the second part is Shimon, for the father of his dear father in law Benito. Benito's father was Shimon, a survivor of the Holocaust.

My nephew explained the meaning of Alon. Alon is an Oak tree. It is a symbol of strength. There is a reference to trees in this weeks' Torah portion, that which I have quoted above, for the man is the tree of the field. The rabbis saw many similarities between man and tree.

The tree is deeply rooted in the ground but its branches stretch way out into the sky. The tree may lose leaves but it will still survive. A tree must have strong and deep roots to survive, so too a man. A man who forgets from where he came, a person who forgets his roots, his traditions, his faith, is like a stick in the ground with no roots, the first wind will knock him over.

A man is a tree, solid and strong with deep roots.

My nephew explained that an oak tree is powerful, it may lose many leaves but it always rejuvenates itself, such is the Jewish nation. The oak symbolizes strength and recovery from tragedy.

There is another connection as well, an important one. My nephew did his military service in a program called Hesder, or "the arrangement" whereby soldiers serve for five years. He studied at the Har Etzion rabbinical academy which is located near the old settlement of Kibbutz Etzion.

In the early 1930s, the land was purchased by Jewish businessman Shmuel Zvi Holtzman from Rehovot, who renamed the settlement "Kfar Etzion," a play on his own name: Yiddish “holts” and German "Holz" means “wood”, which translates to “etz” in Hebrew.

The Kfar Etzion massacre refers to a massacre of Jews that took place after a two-day battle in which Jewish Kibbutz residents and Haganah militia defended Kfar Etzion from a combined force of the Arab Legion and local Arab men on May 13, 1948, the day before the Israeli Declaration of Independence.

There are various accounts of the battle but the general consensus as that  129 Jews, including non combatants, were murdered after they surrendered.

Near the village stood an old oak, estimated to be 700 years old; Kermes Oak (Quercus calliprinos).

The town of Alon Shvut, literally "the Oak of Return" was founded in 1970. This land which was occupied by Arabs was finally liberated in June 1967. Those who returned, which included many of the children of those Jews who were massacred by the Arabs on this spot, reestablished the community and a Yeshiva, rabbinical academy.

Alon Shvut sits on the ancient road to Jerusalem, which is still marked by Roman milestones. Many mikvehs (Jewish ritual bathes for purity)  believed to have been used by pilgrims on the way to the Temple in Jerusalem have been found in the surrounding hills.

Alon Shvut is located on the site of the Battle of Beth Zechariah, fought between the Maccabees and the Seleucid army after the defeat of the Seleucids in Jerusalem.

We see a long Jewish history in this area, troubled times but yet a fierce desire to return and rebuild. Thus the name of my new grand nephew, Alon Shimon, symbolizes this return, the roots, the strength and the hope for the future. 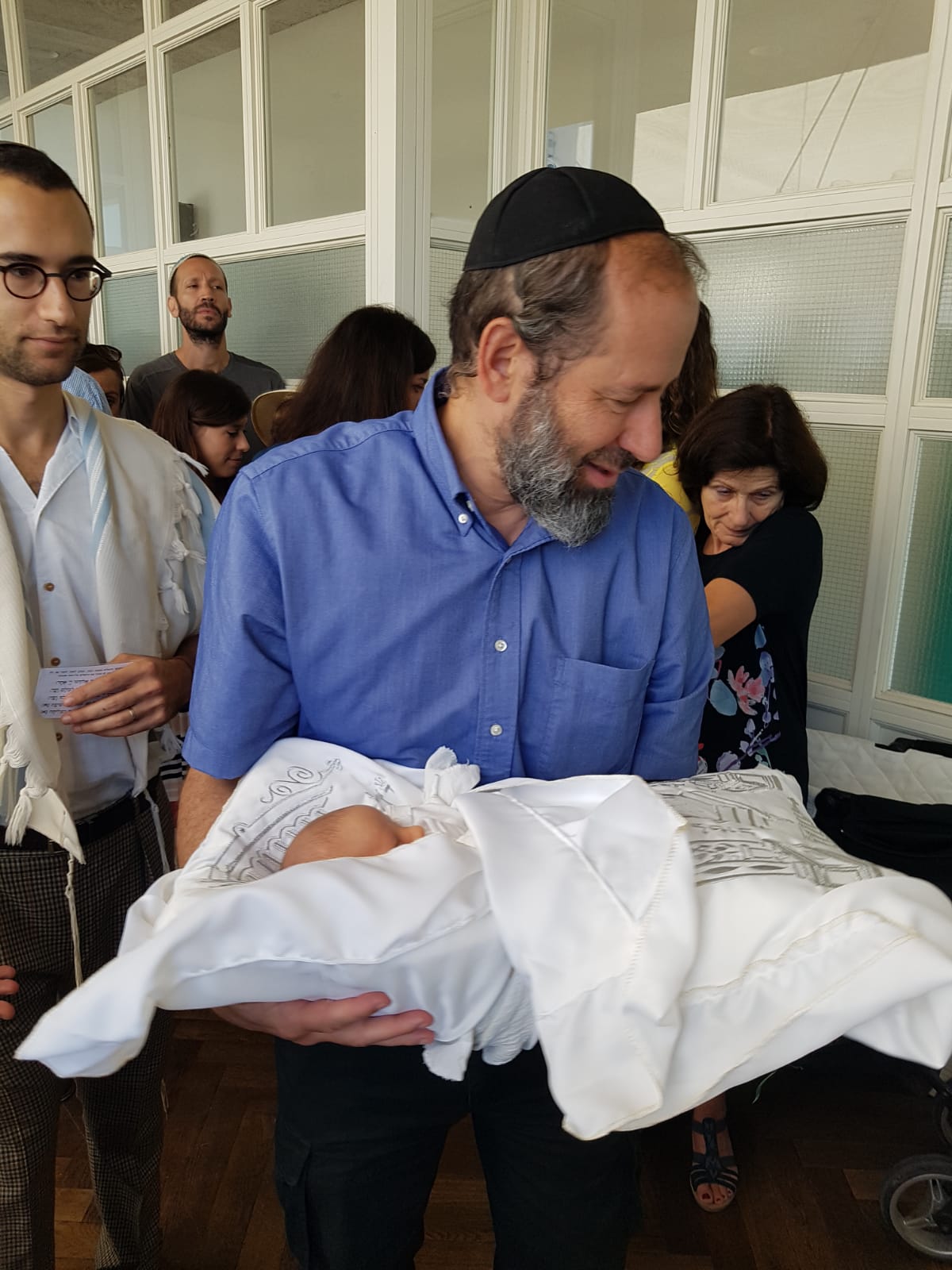 Welcoming Alon Shimon Katz, may his light shine bright, into the Jewish nation, the Cohen clan and the Katz family.

Following the naming, the Mohel (ritual circumciser) called forth all the Cohan members to bless the child. Together with two of my brothers, my nephews Arie, Yitzi and Shmuli (Aryeh, Yitzhak - Isaac, and Shmuel) we recited the ancient family blessing that was written in the Bible more than 3,500 years ago and recited ever since, May God bless you and guard you, May God shine his light upon you and grant you grace, May God turn his countenance towards you and give you Shalom. (Wholeness, peace).

and the eternal light continues.....