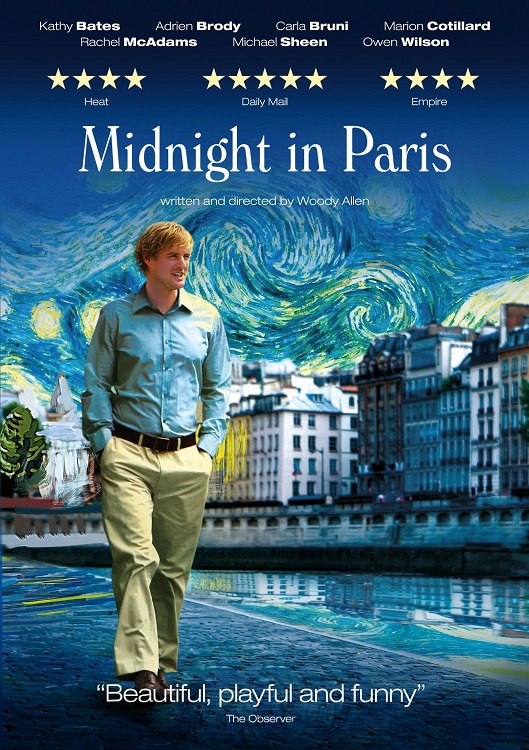 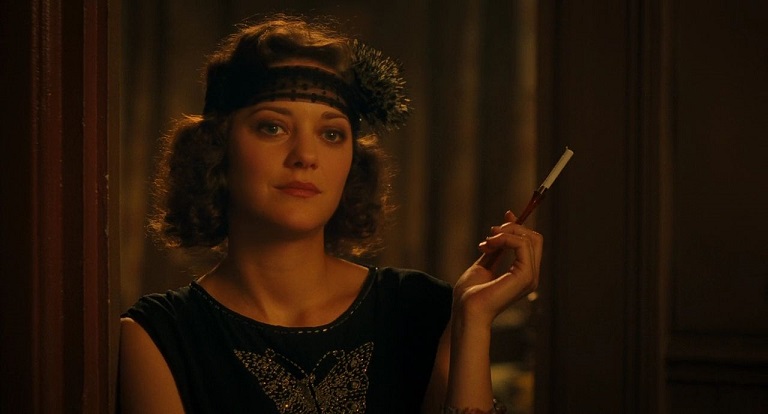 Midnight in Paris, Written and Directed by Woody Allen I am a long-time fan of Woody Allen, from the early standup routines and comic films to the later introspective journeys. He hails from the same era Brooklyn as my father, so there is a natural connection.

These days I rarely watch any films, other than on the plane.

When I noticed a Woody Allen film, I asked the flight attendant for a cup of coffee (not bad actually) and sat back (does one have a choice on the plane?) to enjoy the movie.

When it was over I was overcome with thoughts, I felt a need to write them down...on whatever paper I could find.

Back to the Flight

I am on the plane, just watched a Woody Allen film, "Midnight in Paris". I have always admired Woody's creativity, expansive way of thinking, and challenging approach. Much like my dear father of blessed memory, also from Brooklyn, he challenges us to think, to reevaluate, to see things from a different angle, to open our minds to possibilities previously unthought of.

Without revealing the story line, an American man on a trip to Paris has his sense of reality challenged. He is thrust into a situation where the dividing line between reality and fantasy becomes blurred, where a new approach to thinking, to living, emerges.

We are limited by our own world-view, by our own paradigms, whether created by us or inherited, that we usually are incapable of seeing anything beyond this paradigm. As Bruce Lee wrote in martial arts terms, we are trapped in a cage of our own making, which we have chosen to enter. Even if we leave this cage, which we can do at any time as we find that it does not meet our needs, we only move to another cage. Bruce Lee wanted to break free of all cages. With Israeli Krav International (IKI) we follow this approach, not to be limited by thoughts and concepts that confine us.

Our innovations in Krav Maga, now being taught to police, military and civilians all over the world, are the result of our innovative thinking. We break out of all cages and just ask....what if this happened, what if that happened, what are we really capable of doing? We are open to all possibilities; we challenge every technique and idea.

In this thought provoking film, Allen shows that sometimes by embracing the possibility that the fantasy might be real - we open ourselves to a real reality that otherwise would not have been possible. By breaking down our paradigm we open ourselves to endless possibilities. We are not logically committed to these new options, we are not making any decisions - we are just allowing their existence into our expanding world. As John Lennon wrote, these ideas are "caressing and possessing us".

Our lead character, Gil Pender, is living a seemingly good and happy life. He is on vacation in Paris with a beautiful woman but he is filled with fear and anxiety (and always carries pills to deal with these problems). When he abandons caution and gets into an old Peugeot that unexpectedly stops for him - all sorts of possibilities open up for him.

He did not know where this car was going. At first he thought it was a case of mistaken identity, but nonetheless he gets in the car. He asks, "Where are you taking me to?"  Indeed if we take risks in life we can always wonder, "Where is this taking me to?"

Gil meets many great artistic figures from the past; artists, writers, composers and singers who have long since past from his life. He sees them alive in their creative prime. Hemingway chats with him about life and literature, Gertrude Stein critiques his work Salvador Dali invites him for a drink. These encounters challenge him to finally start on the path to become that man he truly wants to be, free of his previous constraints. He becomes liberated, he becomes himself.  He learns to believe in himself.

Hemmingway challenges him to a boxing match. All men should fight. He tells him that every writer must strive to be the best, must believe that he is the best. He says you need to say, I am the best! the very best of them all, and believe it! "Declare it" he says, without doubt. I too recall this challenge in my own life when another instructor said, I am going to ask you a question, and I want you to answer me honestly, do you truly believe you are the best Krav Maga instructor in the world? Do you truly believe you are teaching the best Krav Maga in the world?

Hemingway teaches the young writer that to truly live, love and write you must first lost the fear of losing your life. He speaks of war and combat and glory, of living to the fullest. Hemingway finds it surprising that a man should fear death. (something he demonstrated throughout his life and in the way he chose to die). He says, "All men have done it before you and all men will do it after you. To truly live, to be creative, you must lose any fear of death, rejection, of failure; these are all illusions that hold us back from achieving our true self. We have to cherish the moments when we are truly alive, without fear.

To me this brings back pleasant memories of full-contact fights, in New York, in Israel, in Los Angeles, when you hit, and you get hit, and you are no longer afraid of anything. You tasted blood and the fear is gone, and for those few moments you are truly alive. Hemmingway offers to box Gil, but Gil is not interested. Boxing and writing? Yes, they are the same.

Gradually Gil lets go of the "reality" of his current life for the reality of the life he is now experiencing. As he leaves his former life he is able to find true love without seeing his path clearly before him, without mapping out his future direction, without knowing "how it will end". The film ends with no conclusion, only possibilities. and this is life itself.

The woman he meets in the past, whom he falls in love with, was not the answer to his life quest but freed him from previous limitations and preconceptions. It is not about finding someone to solve your problems but about being someone whom you can live with; allowing yourself to be someone. There is no answer, there is only openness to the possibilities; allowing those possibilities to play themselves out.

Gils' pre-Paris life was marked by compromise and self-doubt. He did not respect what he was doing, he did not really connect with his fiancé or in-laws but he went along with it because it "seemed right" and was the accepted thing to do.

In a chance encounter he meets Salvador Dalí  and two of his friends, Luis Buñuel and Man Ray (Emmanuel Radnitzky), Gil presents to them his insurmountable problem but these men, part of the surrealism movement, do not see it as a problem at all. They see the illogical as a possibility, they are not confined to standard logical thinking. Surprise, lack of standard logic, lack of sequence, comparing and contrasting in an unnerving way, allowing the mind to express itself freely, this is part of their reality. So to them, what seems unsolvable, insurmountable to Gil is actually normal and within the realm of their reality. The Bizarre is not out of the question. There is nothing that is impossible to the free mind. To the surrealistic the unthinkable is not strange. As Man Ray says, "so far I see nothing strange" about a man living in two periods at the same time. Sure, go on with your story, all normal so far. Anything is possible.

Naturally this approach appeals to my view of Krav Maga, and life. Logic would not have taken me on the path that I find myself, far off the beaten path and often far from home.

Midnight in Paris - After midnight strange things, not of this world, begin to happen. After a certain threshold in life certain things begin to unfold in a new way.

As in some of his other films, Allen ends the film with no real ending. There are no conclusions, only possibilities. He does not make the decision for us, that would be too easy, but he challenges us to take responsibility for our own lives and make our own decisions. No one can truly make our decisions for us, that is our responsibility. We cannot pass this burden on to a guru, parent, teacher, or film maker.

There is no way, as Bruce Lee said, and we must use no way as the way because we are entering the unknown, the path less traveled (Robert Frost). We have to be open and find our way as we go along, perhaps getting a little lost along the way.

Many of us prefer to to sleep before the clock strikes midnight, we prefer the comfort of our warm beds to the street of Paris. But at midnight...all sorts of possibilities open up.

When I stayed in Paris in September, 2011, I was on the street. Much like our character in the film, I was frequently lost. On one occasion a nice woman named Vanessa spent one and half hours (and about 3-4 cigarettes') with me, until we (she) found my hotel.

Paris, a place where the imagination can run free. 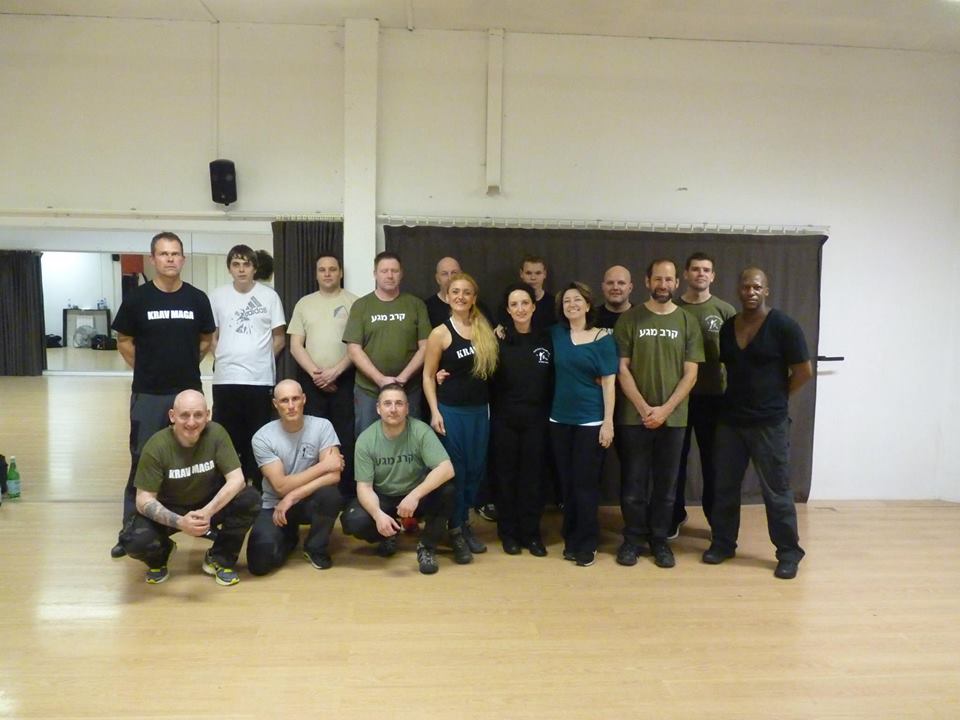 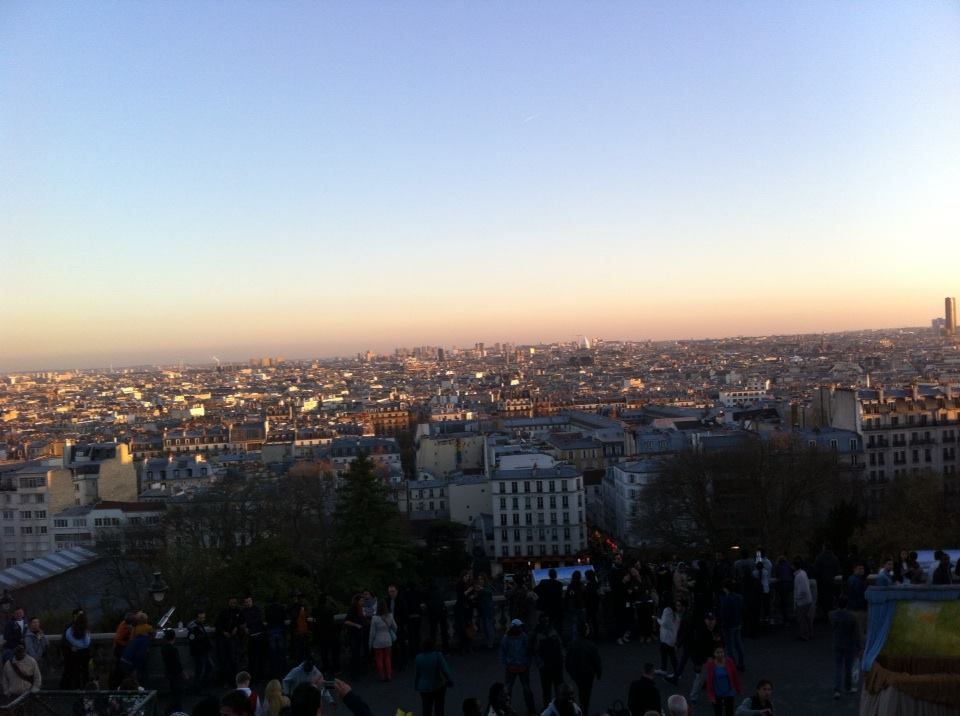