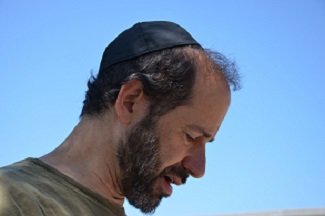 When I was in Rabbinical College, Yeshiva, and I would write letters to my brother Michael he would say.."Moshe, do you realize all your letters from Israel begin like a sermon? It sounds like you are clearing your throat and saying....Ahem...so...And Moses spake unto the Children of Israel...

Can't you write a normal letter?"

I guess the name chosen for me had an effect. Named for my grandfather Moe and having the name of the great leader Moshe/Moses ...public speaking, public roles, activism and leadership were in my blood.

Life is a calling.

So we open the Torah, the Bible, and so often it begins with ...and Moses spoke to the Children of Israel saying....etc.

Let's stop and think, Moses did a heck of a lot of talking!

Indeed he did because he had a lot of lessons to teach, he had a lot to get across. So do I. So I speak and I write.

But Moses was frustrated, the Bible clearly records that. He was frustrated with his people and he spoke about this with his best friend, his confident, his therapist, God!

My dear father suffered the same fate, he often felt he was "shoveling shit against the tide", people just do not listen. That is why 3,000 years later we are still reading the words of Moses, because we still have not gotten the full gist of what he was saying.

the good news is that some of it has sunk it. Yes, not all, but some. We still have problems, lots of them. We still discriminate, we still behave badly man to his fellow man, and man to woman. But imagine where we would be without those words.

The words of Moses, the words of the Bible have influenced your life in more ways than you can possibly know.

The civil rights movement was spearheaded by the descendants of Moses.

The labor unions were founded by descendants of Moses. The rights of women, children, fair pay, social justice, education for all, none of this was a given. Socialism, Communism, Capitalism...all stem from a desire to improve the lot of men...the descendants of Moses. Marx may have converted away from his religion but its lessons were still embodied in his soul. He could not escape it. Think what you will of Communism but Marx had his heart in the correct place, he care deeply about human suffering, the message of Moses.

So after all his talking, "And Moses spoke..." ...someone was listening, and slowly the words have had an impact. We have a long way to go but we have come a long way.

So I will keep on talking, and writing, and we shall keep on reading the words of Moses until we get in right.

It is our job to repair the world, to start the healing.

Israel, A Nation of Warriors
new and expanded
By Moshe Katz

Now available in paper back or e book

Israel, the story of a fighting nation. From the first Hebrew warrior Abraham to our own modern times, a history of a spiritual fighting people.