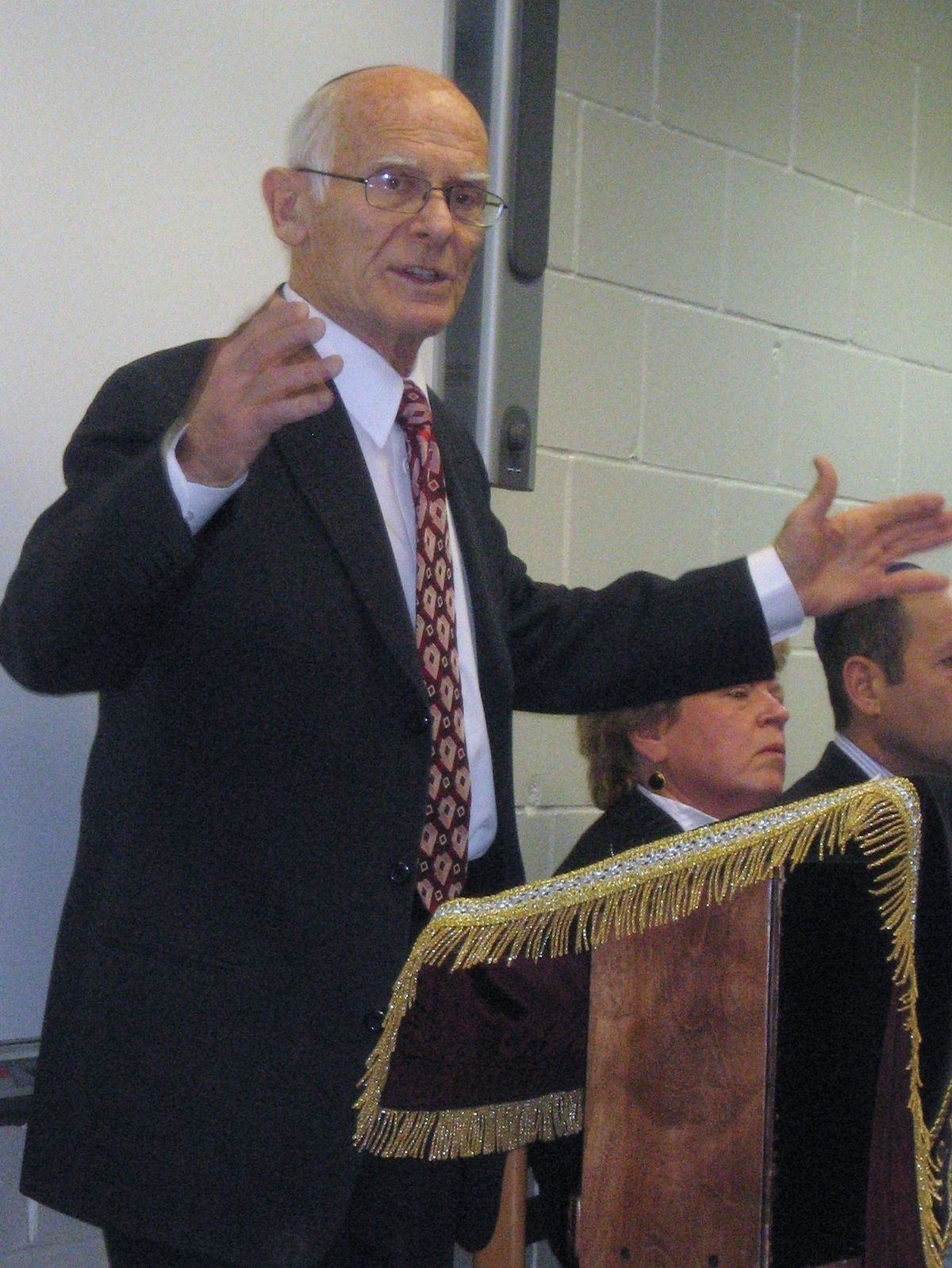 A few kind students befriended me but otherwise I was very much alone. I recall our dear teacher Rabbi Shlomo Wahrman of blessed memory, who was one of my Talmud teachers, once saying to me, "Moshe, how come I never see you smile outside of Talmud class?".

I recall Rabbi Moshe Gottesman, I did not know much about him, why should I? He was the principal of the Hebrew Studies, and he was always smiling. It is funny, and remarkable, how when certain things happen we do not even realize it, we hardly notice it, but it affects our subconscious understanding very deeply. Truth penetrates us and stays there, like a seed, waiting for the proper moment to become a plant and stand up for itself. Only in recent days do I understand Rabbi Gottesman, only in recent days have I realized what an impact he had, on myself and thousands of others.

My schoolmate Rabbi Dovid Orlofsky spoke only a couple of weeks ago in our community and he spoke of how to live, he spoke of living "exceptional lives". Little did I know that I would see Reb Dovid only a couple of weeks later at the funeral of our principal and teacher, Rabbi Moshe. We are both of the Cohen clan and thus were outside the funeral building, as a Cohen may not come into contact with the dead unless it is an immediate relative. When I saw him I recalled his talk about living exceptional lives. Our teacher Rabbi Moshe Gottesman of blessed memory certainly led an exceptional life, without any doubt.

Back to those early days in high school, more than 40 years ago, and I walking the hallway, as Rabbi Wahrman said, without a smile. I see Rabbi Gottesman, and he is always smiling, more than that, he is radiating something special. He smiles at me, makes me feel OK for a moment. High school days, day in day out, but some things sink in.

Rabbi Gottesman was bald, nothing unusual about that, but there was a period where he wore a button that said, "Bald is Beautiful". He was always doing things like that. I noticed it, thought it was odd, and never thought about it again, until the day of his burial. I thought about all I had learned about him from hearing the eulogies and I realized that he was more of a super rabbi, but so humble that it was difficult to notice. The Bald is Beautiful had a message, a powerful message.

Today industries are built upon trying to hide our imperfections, make everyone look young and beautiful. The sales girls at the Dead Sea products prey on people's insecurities; this cream will make you beautiful. Rabbi Gottesman's message was - you are beautiful right now.

But let me explain.

These days we can say there are two camps; one says you must do everything possible to look beautiful and young. You must buy all the products, do plastic surgery and retain your youthful appearance, The other camp says, no matter what you look like it is OK, love your body as it is. So you are dangerously obese, a slob, whatever, you are perfect the way you are, love your body.

I see both of these as false.

To me the message of Rabbi Gottesman was different. Now I understand why he always had an accent. While he was born in Canada he was taken as a toddler, without his family, to Israel. When he returned to Canada he did not speak a word of English. Soon he was in Chicago in a totally new environment, and later in New York when he finally settled down, married, raised a family, and taught a generation. He knew what it was like to be different, he knew what it was like to be an outsider, when he saw me in high school he "knew" me quite well. When he wore his Bald is Beautiful button he was sending a message; this is who I am. Genetically I was destined to be bald and not to have a full head of hair, and that is totally OK. I feel confident and handsome as I am. However I am never content. I overcame much hardship in life. I built myself up from nothing, I am a self-made man, and I am here to tell you that you can do the same.

The word in Hebrew for eulogy is Hesped, and it is much more than saying nice things about the deceased. Not everyone in the audience will have known the deceased, as Rabbi Gottesman said to his son, "If you came to the funeral not knowing the individual, and you left still not knowing him, than those who delivered the Hesped failed in their task."

The Hesped is to acquaint you with the deceased but also to inspire you to live a better life, as Rabbi Dovid said, to lead an exceptional life. What the Bald is Beautiful button meant to me was both accepting who you are, who God made you, accepting that you will never be certain things but understanding that you were also given great potential and that you should never accept limitations. Moshe Gottesman was not dealt an easy hand in life, he did not see his father from the age of a toddler until he was 15, then he was shipped off to a school in another country, his mother passed away when he was 20, he was the "original troubled youth", he was on the fast path to a bad life. But Rabbi Moshe Gottesman left this world a super-hero, a man who influenced a generation. He made himself a great man. Bald is beautiful, the button I saw him wearing in high school, said, you are born a certain way and you cannot change that, there is no point in hiding who you are, in putting on a wig and make up, but you can become anything you want, you can become a leader. You can become a hero!

The boy was a troubled youth but the man who passed away four days ago was an educational super hero.

Just over a week ago I mentioned his name to one of our students, yes, before he passed away, more than 40 years since I last saw him, I was telling Rabbi Gottesman inspirational stories. That is impact. When I was in Germany in October I was talking to Jurgen about the meaning of German Jewish family names, and I mentioned our dear principal Rabbi Gottesman, Jurgen told me it meant "Man of God".

How perfect I thought, how appropriate. And on Tuesday I heard the live streaming of the funeral eulogies in New York and my old schoolmate Rabbi Sam Rudansky spoke. He said Rabbi Gottesman always asked, What does Hashem (God) want of me? and that is how he conducted his life.

And I thought, just a few weeks ago I was discussing Rabbi Gottesman with Jurgen and that the meaning of his name is Man of God, and he truly was a man of God.

Rabbi Gottesman left an imprint on my soul and thus has had a direct impact on our Krav Maga students in Israel and around the world.

He taught to never leave anyone out, if you are inviting 22 out of 25 students in the class to your party, that is not OK, you must invite all, leave no one out. In our style of Krav Maga it is geared towards all, not to the tough guys only, not only to the young and fit, not only to those with champion potential, but to ALL, to the young and old, the gifted and the challenged. This is a lesson of Rabbi Gottesman.

If you see a loner, smile at him, welcome him, remember that you too were once the outsider. You see a kid walking in the hall alone, reach out to him. This is now an essential part of IKI and how we approach our students. Being inclusive and caring to each individual, especially the new comer, this is a lesson of Rabbi Gottesman.

Rabbi Gottesman taught us that our report cards are for our eyes and our parents, not to share with our friends. You got an A, great, tell your parents, do not brag to your friends and make them feel bad. This humility must be a part of all we do. You earned your black belt, great, share the news with your family. Humility, this is a lesson of Rabbi Gottesman.

I am told that when he called on the phone, it was always, Hey there, it's Moishe Gottesman. He never introduced himself as Rabbi. Humility.

Rabbi Gottesman believed in believing in your cause. He raised money for many important causes, he paid for many people to have a good education, but he never begged for money. When he took your donation he said - I am doing you a favor by allowing to take part in this important cause. When we teach Krav Maga we must have the same attitude. Yes, we must charge (those who can afford it), yes we have bills that must be paid, but we must always recognize the great favor and kindness we are doing by teaching others. Believe in your cause or no one else will. This is a lesson of Rabbi Gottesman.

Rabbi Gottesman believed in never giving up on any student, no matter what their track record was. While the Hebrew Academy always maintained a very high academic and religious standard Rabbi Gottesman insisted on bringing in students who needed the most help, even if they could not pay a cent. This attitude that there are no  "Bad kids" is very much a part of our philosophy at IKI today. The impact runs deep. Believing in each student's potential for greatness, this is a lesson of Rabbi Gottesman.

Rabbi Gottesman believed in making yourself the best possible version of yourself. This applied to your mind, your spirit and even your body. He was known as the "push up rabbi" , and one of his grandsons' recalls him doing 120 pushups easily.

We enter this world with great potential and yet with many obstacles and hurdles to overcome, the question is how shall we leave this word? What impact shall we have on others? Shall we be missed?

Rabbi Gottesman shall be missed, and I am thankful to have had such role models.

May his memory be a blessing to us all. 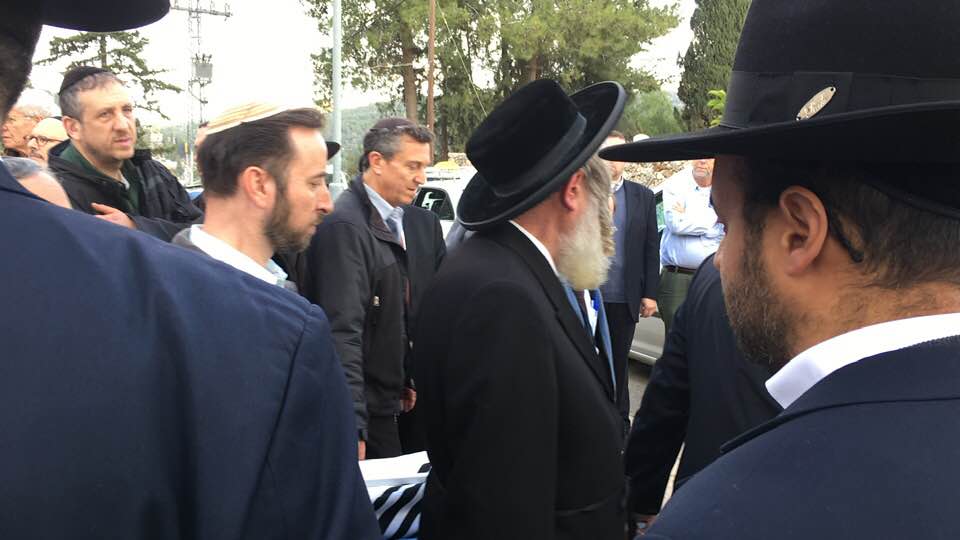 Rabbi Gottesman burial, wrapped in a prayer shawl, being carried to his final resting place in Israel