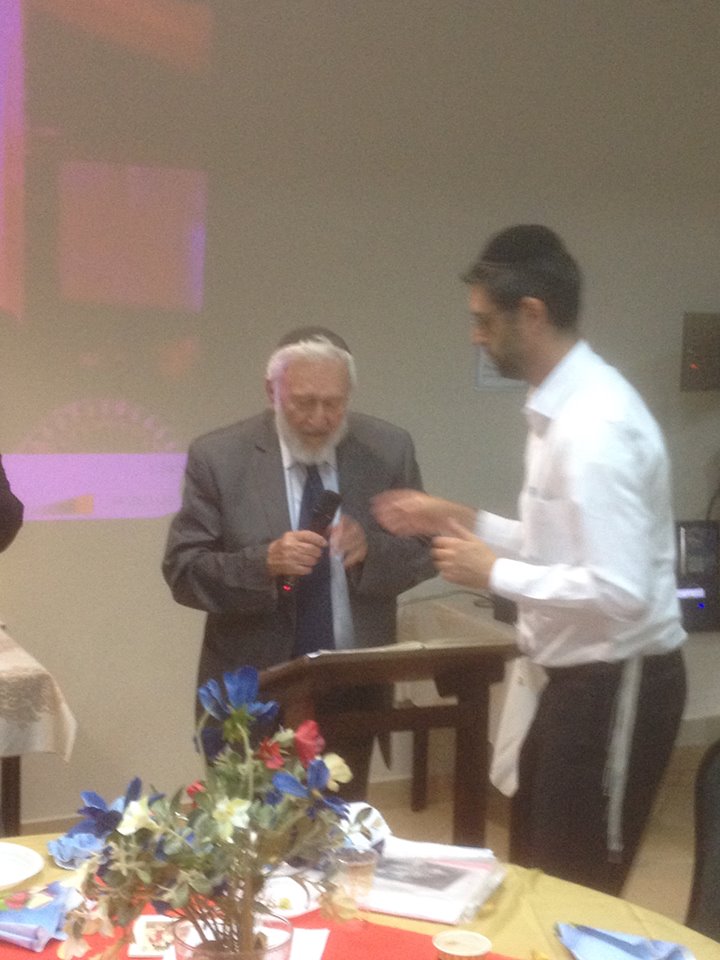 May our eyes behold our teachers....Rabbi Meyer Fendel and singer Ari Goldwag, one of the graduates of the academy.

Last night I attended a party, something rather unusual for me. And quite a party it was. The birthday boy was my high school principal, our beloved principal Rabbi Meyer Fendel may he live for many more healthy and happy years. Yesterday we celebrated his 90th birthday as he was surrounded by many of his disciples.

Rabbi Fendel came to Long Island, New York after the war. Jewish life was nothing like it is today. After the Holocaust there was very little interest in Jewish life and Jewish education. Rabbi Fendel quietly went to work, he built a school, eventually three. The graduates of this school, HANC, (Hebrew Academy of Nassau County) number in the thousands, many are teachers all over the world.

There were many distinguished speakers last night, all graduates of the academy. It was a celebration of knowledge and wisdom, and a way of saying thank you to our teacher for his lifetime of service.

One of the speakers spoke about our Biblical ancestors Moshe/Moses and Pinhas/Phineas פִּינְחָס and the difference between them.  Pinhas distinguished himself as a hero by attacking a Hebrew man and a Midianite woman who were engaged in a forbidden act. This act of bravery brought to an end the Divine plague and calmed the anger of God. Pinhas was rewarded with the covenant of peace.

"and Pinhas the son of Elazar the son of Aharon the Cohen saw what was happening, and he rose up from among the congregation and he took a spear in his hand. and he went after the man of Israel into the chamber and thrust both of them through, the man of Israel and the woman, so the plague was stopped from the children of Israel." (Numbers, chapter 25)

Moshe on the other hand is not known for just a single act but rather for a lifetime of leadership. While an act of bravery is commendable and admirable it is still a single act, a moment in time, a flash of heroism. But a lifetime of devotion to a cause, like Moshe, and like our dear principal Rabbi Fendel is far greater.

Rabbi Fendel created something out of nothing. He came to a spiritually barren area and he saw a need. He addressed that need and went to work. Where would the teachers come from? How would he recruit the students? From where would he raise the money to build and maintain a school?

A true leader does not fear these questions. Unlike an act of heroism this building process is not a single moment but endless days, and nights. It is endless phone calls, letters, meetings. It is setbacks and disappointment.

It is a matter of sticking with something for the long term and dealing with the daily grind. This is what it takes to build a legacy. And Rabbi Fendel's legacy lives on through generations of students.

I too am a teacher, an educator. My tool is Krav Maga, self defense, but when asked to list my profession I always write "educator, teacher" for that is my primary role in life.

Listening to the rabbi speak I thought of our IKI instructors; you are all heroes like Moses because you toil daily teaching students, guiding people and acting as role models. Often it is a thankless job, poorly rewarded financially and often not recognized. But our task is a holy one. We are the Moses of our community. Let us always remember that. And I am proud of all our instructors.

Last night I was privileged to hear our principal speak. I recall, so many years ago, how we took this for granted, his short daily talks after prayer service. And last night he spoke again, at age 90.

May we always be privileged to hear words of wisdom.

Israel: A Nation of Warriors
By Moshe Katz
The story of Hebrew leaders and warriors