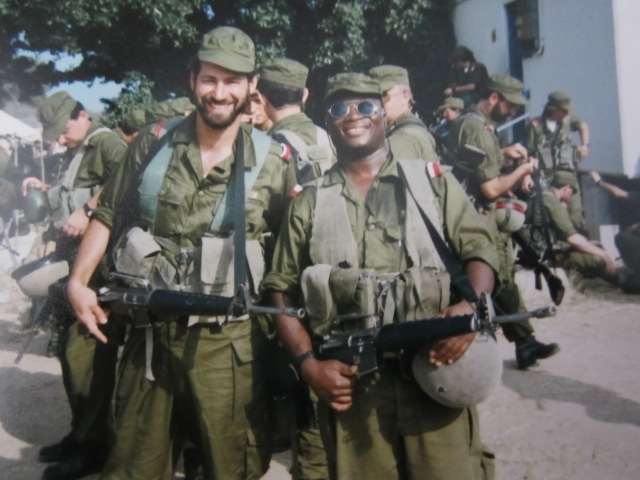 Moshe and Bobby in the IDF, many years ago. Ah to be young with a gun, those were the days.

There was a time when society respected the old and the wise. Those were traditional societies. In fact the title "Elder" was considered the most honorable title one could hope for. It is said that Moses gathered seventy elders. We do not know if they were actually old but we do know that they were wise. To be wise was synonymous with being an Elder, or an older person. With age and experience comes wisdom. With wisdom comes respect.

The Ethiopian Jewish society was one such society. When they first arrived in Israel men lied about their age; they claimed to be older than they actually were. A man of 63 would claim to be 70, for the honor and the prestige of being an Elder.

But times have changed. The old and wise leaders have been cast aside; Now the young people are drawn to TV commercials and MTV. Now it is the young  and the Youth who are worshiped. The older women are dressed in flowing white robes, which do not reveal the body. But the younger ones are trying to look as young as possible with body hugging outfits.

Soon they will be like the other modern Israelis; women in their 40s shamelessly walking around in belly shirts, with belly rings and outfits suited for much younger women.

But it is not just the Ethiopians Jews who are falling into this "Youth Worship" trap; it is also the Krav Maga world.

We all know that in Asia it was the old master who was revered. In fact any young teacher would proudly display a photo of himself standing next to his seated master. The master was old, perhaps even frail, but he had the wisdom accumulated over a lifetime.

A young Bruce Lee returned to China to visit his master, Yip Man. Yip Man was old and frail, quite thin. Bruce Lee was in the prime of his life. But yet, alas, Bruce Lee was honest enough to admit that before he could even begin an attack the old master was all over him. Yip Man had attacked Lee's set up before Lee could even launch an attack. Lee had nothing on the old man.

Bruce Lee came home a much more humble man, and was on the path to becoming a much greater martial artist.

It is embarrassing to see veteran martial artists being wooed by young men and women, recently discharged from the IDF. These young instructors have very little experience under their belts, very little wisdom accumulated, but they are good looking, brash and young…and youth is worshiped. They look "cool", just check out youtube for the young Israeli blond IDF female advertising Krav Maga. Her "techniques" are lousy but see how many "likes" she gets. Now an older woman with gray hair might not look as "cool", but she has wisdom and knowledge. She has more to offer.

Our world is one where truth is often lacking. Every Israeli is a military veteran, tack on to that a typical post-army job of working in security (many young Israelis do this while attending college, the hours are flexible and there is always a need for more security guards), and ..voila! you are a counter-terrorism Zohan superstar ready to head your own international Krav Maga organization.

It is sad to see old people doing plastic surgery and trying to fit into tight jeans, women in their advanced years with bright artificial blond hair; pathetic - better to grow old gracefully, with dignity and wisdom,

The same is true of martial arts/Krav Maga. 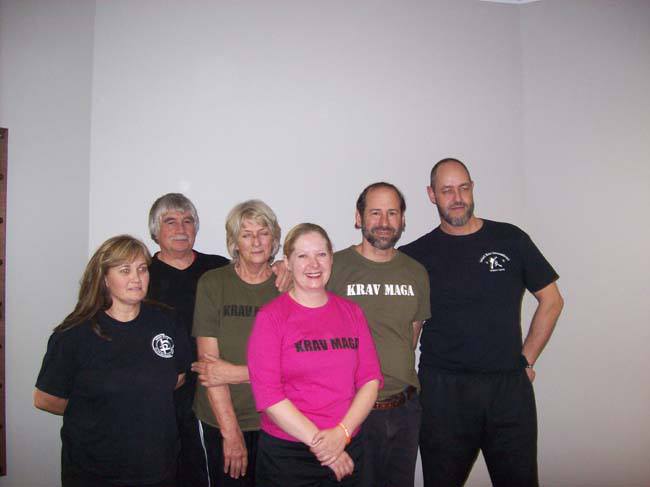 Moshe and the gang in South Africa, July 2013, more than 20 years after the IDF photo (above) was taken, older and wiser (but with more gray in the beard and less hair on the head). With dear friends Jennifer Retief, Barry DuPlessis, Crista DuPlessis, Audry, and Des Brown.

Jewish fighting during World War One and Two

About the author, Moshe Katz, born in the USA and living in Israel since 1967 is a university graduate and a 5th black belt in Krav Maga as well as in Kickboxing and Jujitsu. He has trained police, military and civilians all over the world. He has also contributed articles to numerous publications in English and in Hebrew.