Lies; we create them, we spread them, we live with them and we love them. We love our lies so much that when someone comes along and challenges these lies we respond with a fierceness no one knew we possessed. Our lies protect us and we must protect them. 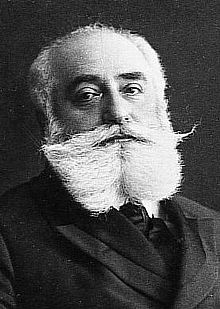 But sometimes, suddenly, something will come along, an event, a person, a thought, something that will shake us. This event might be called a cure to blindness. Historian Benzion Netanyahu, when discussing the life of Max Nordau, explains that, like many Jews, Nordau believed in the idea that Europe was a good place for the Jews.

Nordau came from an Orthodox family but left Judaism. At the time many "enlightened" Jews felt Judaism was a relic of the past, not worth preserving in the modern age. He married a non Jewish woman and considered himself German. He would often say "We Germans". He did not believe that he was less of a German, or a European, than anyone else.

Professor Netanyahu (father of our Prime Minister) writing in 1941 calls this a "blindness". The lie in this case was that Jews would be fully accepted into European life. It was a lie the Jews created, and many believed it. Those who believed it were called "Assimilationists". The Orthodox Jews had a lie of their own, which many still adhere to, and that is that they can continue their way of life in a hostile environment indefinitely.

Like Theodor Herzl, Nordau was a journalist. They met at the Dreyfus trial.

(Just some quick background….1890's…Captain Alfred Dreyfus, an assimilated French Jew, was a career officer in the French army, he was accused of treason, and sentenced to life in prison. Devils Island. The trial was a mockery of justice. It was pure and simple a clear case of antisemitism and this was later fully proven.)

Both Herzl and Nordau, fully assimilated Jews, were transformed by this event.  If a man like Dreyfus could be treated this way, then there was no hope for the Jews of Europe. On that day their blindness was cured, on that day they were blessed with prophecy. On that day they saw the annihilation of European Jewry which was sure to come.

Prof Netanyahu writes about Nordau, "It was a cataract on his far-sighted eyes, caused by assimilation, which enveloped in darkness a most important part of his field of vision. A man like him could not suffer it long. It had to be removed. The growth of antisemitism proved to be the painful operation which removed that cataract forever." (Page 131, The Founding Fathers of Zionism)

Nordau and Herzl, two Jews, finally had their vision back, both would devote the rest of their lives to solving the "Jewish Problem". Their ideas did in fact start the process that led to the creation of  the State of Israel. But other Jews, still suffering from blindness, did not see this on time. They stayed in Europe until the Europeans came along with a different solution to the "Jewish Problem".

Several months after the Dreyfus Affair, as it became known, Herzl came to visit Nordau. This was July 1895. Herzl had a dream, a crazy idea, too crazy to be believed.

Yes, after almost two thousand years, two thousand years of suffering, Herzl said lets' create a Jewish state, a place where the Jews can come to from all over the world. He would eventually write a book called, " Der Judenstaat" "The Jewish State" (1896)

Their conversation lasted three days. "Herzl had to prove that what seemed like a fantastic dream was the only  practical plan dictated by a long process of history." (Netanyahu, page 134)

At the end of the three day conversation, Nordau was sold. Nordau, a psychiatrist, reached out his hand to Herzl and said his immortal words, "You may be insane, but if you are, I am as insane as you."  And thus he became Herzl's first convert to Zionism. 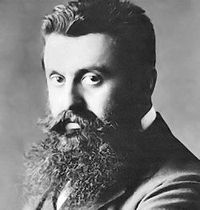 Two Jews siting in Paris, France, Europe, they had long since abandoned their Jewish way of life; they had lived a life of lies. They were blind to the truth. The Dreyfus Affair cured them of this lie and now they could see the truth clearly.

They each traveled the world and like the prophets of old they preached, but were largely ignored. Today their physical remains lie peacefully in our State of Israel, which their ideas, way back in 1895, helped create. Their spiritual remains hover over us in our own land.

Herzl and Nordau; today their names are honored with street signs here in Israel, and towns such as Herzelia, and Nordia. The owner of our local grocery store is called Herzi.

They changed our way of thinking, they took a people and shook them up and dusted the pain of 2,000 years off their ragged clothing. And they saw the future of Europe…

A crazy dream! Yes, but as Herzl pointed out, sometimes the crazy insane, illogical dream, is really the ONLY practical plan we have.

Think about it; you are stuck in your dead-end job and dead-end life. Leave it all and start your own business!? That is crazy talk! But sometimes the crazy idea is the only one that really makes any sense in light of the past, present and future.

Wake up sleepy ones! Open your eyes and see!

It is truly amazing how many people still believe that with traditional martial arts or movie Fu kungfoolery they can defend themselves, but …we have always done it this way.

With IKI Krav Maga we try not to wait for our "Dreyfus Affair", we try to see the truth clearly all the time.  Never forget the reality of life, never be blinded by our sweet comfortable lies, never be content. Never be caught unprepared.

Kids today walk along Nordau street, make a left turn and might end up on Herzl Blvd, but do they stop and think? Do they close their eyes for a moment and go back to Paris,  1895, and see two totally crazy Jews sitting for 3 straight days and talking, and coming up with the insane idea that yes, you and I can take this people, scattered all over the world for 2,000 years, speaking a hundred different languages from German to Arabic, from Polish to Amharic, and Hindu and English and Farsi and Italian and French and Russian, secular and religious, rich and poor, Communists and Capitalists, and we will get them to all come together and come to a land which is a barren desert controlled by corrupt Turkish sultans and wild nomadic Arabs, we will get these doctors and philosophers to pick up a shovel and become farmers and embrace Jews they have not seen since the destruction of the Temple in the year 70 C.E. and together build a modern democratic state??

And yes, in fact, that is exactly what happened.

So we should stop and think, because we are the fulfillment of their dream.

Their souls are still sitting together, in a heavenly coffee shop, I imagine, and saying..

Yes, this seems like a great idea! But first we will go around the world and convince the world leaders to back us on this, and give us tools and money…

And then one crazy Jew reaches out to another with his hand and says, "If you are crazy, then I am crazy too" and God joins them, and all our holy warriors from the past join them, and David, and Samson, and Judah the Maccabee, and the souls that have been waiting for 2,000 years to come home join them, and then the room is filled with spirits and they say, "Amen, yes, it will be so".

And today, 118 years later, I sit in Maaleh Adumim, in the State of Israel and I say, "Max, Theodor, Thank you."

"...in a world of violence and merciless struggle for power, one must be able to fight like a wolf, if one does not wish to be devoured like a sheep" (Max Nordau)

Book,
Israel: A Nation of Warriors
by Moshe Katz

Krav Maga Tour and Train in Israel. Come see the dream that came true, visit Dr. Theodor Herzl on Mt. Herzl. Come train in the Israeli fighting style that has captivated the world. Visit sites of historical and religious importance.

Intensive Krav Maga training daily, in the heart of Israel, the Judean Desert.

Open to all levels, no prior experience req 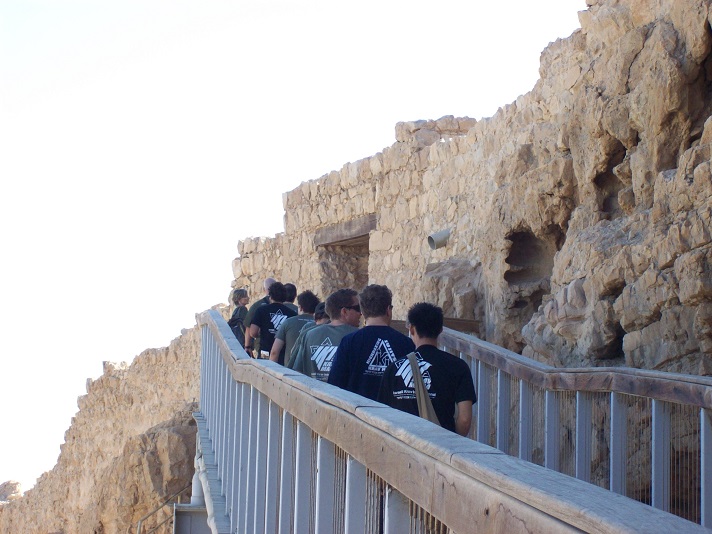 The gang exploring Masada and learning about the first Jewish - Roman war in the year 70. We have returned home.