With regular attacks, here and around the world, we are always seeking new and improved methods of defense. Usually this involves what Bruce Lee called, Simply to simplify. I always say that at its core Bruce Lee and Krav Maga are the same. Had he been alive today I believe he would be a strong advocate of our approach.

Our methods evolve. But how and why?

We not only observe real attacks on real people, study the surveillance cameras, speak to those who witnessed and survived attacks, but we also observe students, of all ages, men and women, all over the world.

In the past we had several different techniques to defend against a punch, now we have one.

In the past we had several different techniques to defend against knives.

Now it is down to a few simple concepts. The same is true for guns, sticks and all weapons. We are simply simplifying.

Not only do we simplify each category but we make the techniques from one category compatible with those from other categories, so that, for example, our defense against an ice pick attack and all punches to the body, are in fact, the same. (To see this...come to class or purchase a DVD, or join our on line program, see below).

Today I sent out a defense for an "ice pick" style attack. This led to the following discussion with one of our senior IKI instructors. I feel the question raised, and the discussion that followed, are very important. A question raised by one person is thought of by many.

So with the permission of Hal Herndon of Georgia Mountain Krav Maga, I am sharing our discussion. 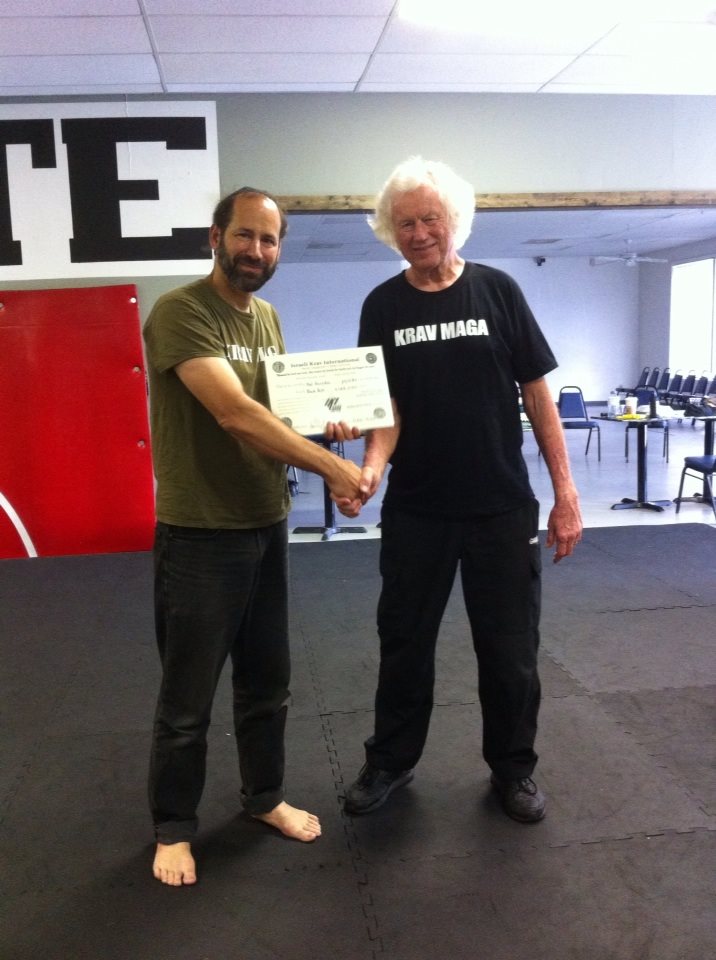 The defense I show for the ice pick knife attack is the same I use to defend against a punch; a slight step forward, one arm forward, one arm a little back. This way one arm is "in reserve" for a follow up attack. Again, this can only be clear if you are actually training with us. But imagine here one arm intercepts the attackers' arm while the arm is next to it in a ready position.

Moshe:  Wouldn’t it make sense to also do a strike to the face and/or eye gouge as part of the left hand defense against the knife arm?

The punch to the face adds very little but costs me a great deal.

If I even need to take the time to think, " Knife" that is wasted time. Learning one response is hard enough, learning more than one complicates matters.

Now if I use the old knife defense, i.e. with the right hand striking the face, what happens if it was not a knife attack but a punch? Now my right side is totally open and vulnerable to his second punch.
That is a dangerous risk.

The other point is, the strike to the face has also been part of the attack, not so much part of the defense, i.e. it is a counter - attack. But what I have found watching thousands of students is they get very excited about this part and put the emphasis on that punch, neglecting to do the arm block effectively. So overall that punch becomes very costly and rarely effective.

Let me know what you think

Makes perfect sense and I agree.  However, looking at the scenario in the clip I think that I (personally) would have done something like a face or eye strike as part of the second or third knife strike to try to stop it.  Might have kept me off the ground(?).

I totally agree on the first strike, esp. since as you say you aren’t 100% sure it is a knife or ‘whatever’

Yes, all true, but I would not want to confuse people, which happens quite easily.

This is an old Talmudic idea, for example, the Bible says do not cook a goat in it's mothers milk, so that is applied to all animals, but why chicken? a chicken does not produce milk for its young, so why prohibit chicken with milk?

They say the scholars are more lenient because they know where they can make changes, but the simple man will get confused. The law is for the simple man.

Thanks for the question.

I like the comparison.  One thing I will offer (and I think you will like this) is that in these situations I always emphasize to students that we are teaching COMPONENTS, without which the technique won’t work.  We teach the first component, try to get the students to “get it”, and then add the next.  As this new part gets added and absorbed it eventually becomes one subtle part of the whole which, with practice, will become an integral part of one continuous movement.  Too many details on the front end do nothing more than confuse people AND more importantly, at some point they focus on the wrong end of the technique….Just my observation.

Are you still using a 1950's phone and phone book?

Stay up to date with Krav Maga as well.