Twelve years earlier, according to the Hebrew date..."Staff Sergeant Philip Mosko, 21, from Maaleh Adumim, who served as a paramedic in the Paratrooper Brigade, was killed during fierce fire exchanges between IDF soldiers and Hizbullah in the village of Dibel near Bint Jbeil Monday night." 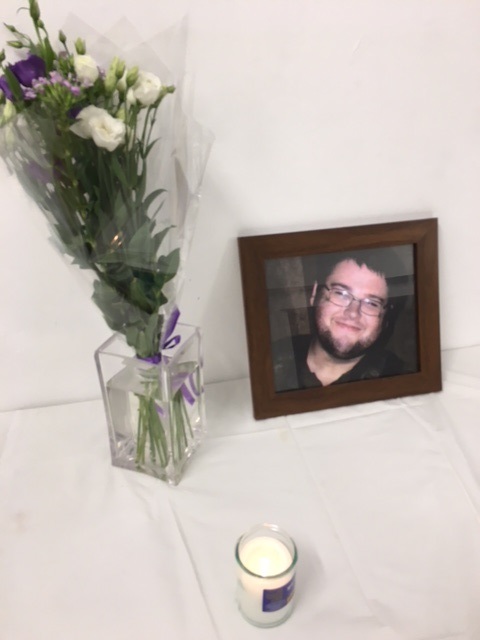 Remembered with flowers and the traditional Yaartzeit candle, as the "candle of God is the soul of man". (Proverbs 20, 27)

It is a great honor for me to be here tonight and to have been asked by the family to say a few words in memory of dear Philip David Mosko of Blessed Memory. Sadly I was not privileged to know him during his lifetime and I only "met" him after his passing. Through his family, his friends and many of those whom he touched during his lifetime I feel I have come to know him. I feel a closeness to him.

The rabbis say "After Death, Holy" joining together two sections of the Torah, the first is titled "After Death"  (referring to the death of the sons of Aharon the Cohen) and the second section is Kedushim, Holy, referring to the laws pertaining to the Cohen (Priestly) clan. The rabbis combine these two phrases to form, "After Death - Holy", i.e. the tendency is that after one dies he is seen as holy, there is a tendency to forget the negative and paint him as a "saint".  With regard to Philip this is not the case.

Most of you present here tonight knew him, you all know of his great deeds; how he was an outstanding volunteer for the Civil Guard and for the Magen David Adom emergency medical services. We all know how he lived to help others. We have heard how he was always the first one on the scene, eager to help, practically living in the offices of the Civil Guard and the Ambulance services. We have heard many stories over the past 12 years of individuals who feel they owe their life to dear Philip.

The story has been told and new stories continue to emerge. In his brief 21 years he accomplished a lifetime of good deeds.

Philip came to this world to do good, and he could not be stopped. From every story the same pattern emerges; he wanted to be on the scene, he wanted to be there to help. He was reliable, dependable. We heard how when news of the attack in which Philip was killed was received by the IDF medical teams, the commander was relaxed, he said "I have a man up there near the scene of the attack, it will be OK". But little did he know that this time Philip was among those hit.

But Philip lived his life the way he wanted to. He had no regrets. As we heard this evening from his dear mother Luba even as a child in Russia he was so proud to be a Jew. When they played King of the Mountain and he "always, or nearly always won", he would proudly say, "A Jew has won!".

His mother's entire family was wiped out other than her father, Philip's grandfather. Philip knew quite well what he was fighting for. Philip fulfilled his dream.

I am a person who is comfortable with public speaking but yet for tonight's gathering I was concerned. I have spoken in many languages all over the world but for tonight's important gathering in honor of Philip I was worried that perhaps the right words might not come to me. I walked around in circles, as my dear mother who is here tonight can testify that I did as child; Thinking and walking around in circles.

I walked around in circles, talking to myself, to Philip, to God and asking for the right words that would make a difference tonight, words to comfort the family just a little.

And then a thought entered my mind, a story we were taught in 7th grade: We were learning about the destruction of the Holy Temple in Jerusalem in the year 70 C.E. The Cohanim (the "priests" of the house of Aharon) were in the Temple, and the Romans set the Temple on fire. The Cohanim were trapped inside the flames. Israel had been broken by bitter civil war, by petty arguments, by baseless hatred. Fights over power and leadership roles destroyed our united front. The Romans merely defeated a broken nation, we had destroyed ourselves.

And the Cohen clan, among them perhaps my ancestors, were caught in the Temple, and the rabbis tell us that they took the keys to the Temple and they threw them up to heaven, to God, with these parting words; We were not worthy of the Holy Temple, we were not worthy, we return the keys to the Master of the House. They threw up the keys and their bodies were engulfed in flames as they returned their souls.

And then Exile came upon our people. Humiliation and degradation was our lot, as it was predicated in the Holy Torah. We were scattered to the four corners of the earth, exactly as the Bible prophesied.  We were not sparred any pain or humiliation, we received every imaginable punishment. And then, as was foretold, we returned. From the Four Corners of the earth we began to return, and to fight for our nation. But the fight has been a costly one.

Two boys were killed in combat this morning; Philip and Noam. One came from Russia, the other from the United States, both reclaiming their national heritage, both descendants of those exiled by our enemies of many years ago.

Philip lived in my town, Maaleh Adumim. My mother is close with his mother. We were in the car when we heard the 11 am news, 'the news from the front...killed in action this morning....and Philip Mosko of Maaleh Adumim.'

My mother shouted, "that's Luba's boy! Oh my God, poor Luba' We pulled over to the side of the road to digest the tragic news. Living is a game of Russian roulette.

You ask why we fight, and why we fight so well; it is because if Philip and Noam, and all the other boys, were not up their fighting then the enemy would be at the gates of our town, as they were before, before we had an army. The enemy would be in our homes, as they were in Hebron in 1929, slicing open pregnant women, slitting the throats of learned elderly rabbis and young students, raping women, smashing the heads of babies against the wall, massacring entire families as their shrieks cry out to heave.

We have seen the enemy.

So we fight because we must. And Noam and Philip are holding strong, knowing the extreme dangers they face, because they are fighting for their families and friends, they are fighting so little children do not have to spend their childhoods in bomb shelters, so old people can enjoy a moment of rest. They are fighting to fulfill the words of the prophet Zechariah who wrote 'And it will still come to pass that old men and old women will sit in the streets of Jerusalem, and a man will lean on his cane for he has reached a ripe old age, and the streets will be filled with little children playing in her streets.'

And today, their time ran out. As I write these very words, Philip, of blessed memory, a young man of twenty one, is being buried in the Mt. Herzl military cemetery of Jerusalem. Today they returned their souls to heaven and left grieving families who will never recover.

But their spirits will not die. Another soldier will pick up the rifle or the medical kit of Philip, the combat medic, and continue. He will continue running into battle without fear. He will continue as the defender of Israel. The torch will be passed on and the request of the dying soldiers fulfilled:

'I fought as long as I could; I gave my life, now it is your torn to protect our people. Carry on!'

Thousands of years ago our people were exiled from our land by overwhelming enemy forces. In the exile, our people were persecuted and massacred, yet we survived. In Russia an evil government arose that tried to estrange us from our age old religion. For years, they did not allow our people to return home.

We shouted, Let our people go!

Finally, Philip returned home. He was overweight and was rejected for military service, but this did not stop him. Nothing would stand in his way. He lost the weight and qualified for combat service. He served in the combat zone in Lebanon, treating injured soldiers, until an anti tank missile hit his armored personal carrier."
(from Israel, A Nation of Warriors by Moshe Katz)

And I am walking around in circles and the thought comes to me; this is our second chance. Our ancestors threw the keys up to Heaven, and said, Master of the House, we are not worthy. And then, nearly 2,000 years later, young men like Philip, and Noam, come home. And Philip volunteers and gives and gives and gives with a full heart and a broad smile. And as he returns his soul to heaven I believe that God is looking down at us and saying, My children, it is because of the merit of Philip and young men like him that you are hear today.

Philip represents our second chance in the purest form.

May his memory always be a blessings to us all.

I actually met him for the first time in Chevron about half a year earlier; There was some event which I don't remember what exactly, and some medical team, which he was part of, was on standby on the streets. I had a little chat with him then, and he seemed like a knowledgeable guy. In that type of scenario you see the guys are 'less combat' and have 'better conditions' (like don't need to stand 6 hours guarding with a ceramic vest and sit either on base or a air conditioned vehicle) and don't take them so seriously.  During the second Lebanon war, we by chance walked together in the Magad's convoy, which included about 12 people. And what we had to carry then made a ceramic vest seem like a walk in the park. And in war time, you can't be picky and spoiled - everybody has to carry a heavy load - and it's usually split between everyone regardless. It was very impressive seeing him, who: A. didn't seem like he is in combat shape, and B. wasn't really obligated in carrying equipment like everyone else - carry equipment like everyone else and held more than his end. We had some deep conversations in the many hours we spent sitting around in Lebanese houses... and even though some of the guys that were there might not show up on Yom Hazikaron (Memorial Day) because of other commitments (2 of our mefakdim (Commanders) were killed too), we do think of him and remember him fondly.

I also remember when we were sitting in a position, and there was an attack on the plugat maslul's (those still in training) position not far from us, and it was clear that there were some injuries (ended up being a casualty), he wanted to rush out there and help, even though it was practically suicidal, and the mefakdim  (Commanders) had to basically hold him back.  Even when he injured himself and was evacuated (which eventually led to his death - a missile hit the evacuation vehicle), he didn't agree to leave at first and was forced to.  A real will and commitment that guy had.

Hope you can tell some of that.