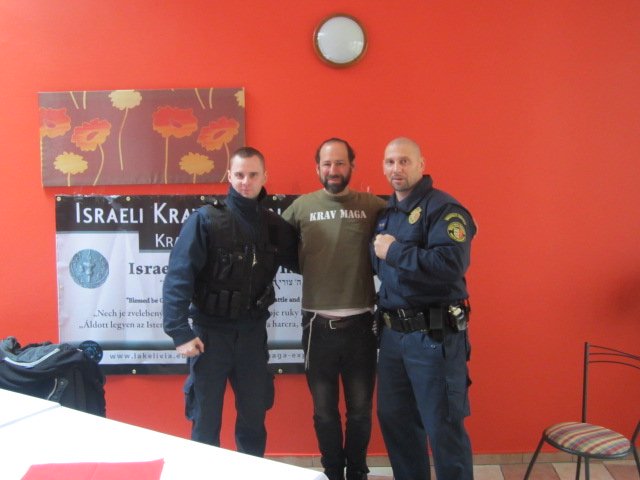 Tough enough to teach the police 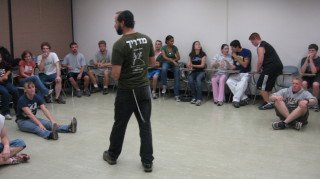 When I teach a class or a seminar I make every effort to help each student, but without criticizing them. This is not the approach of many Krav Maga instructors and in fact I have been accused of being "too soft", of not being a "real Krav Maga instructor."

I recall one positive comment that changed my perspective, it was a friend named R. Wachs, the father of two of my students. He himself is a renowned educator, and he said to me one day, you are not just a martial arts instructor, you are an educator, this changed how I viewed myself.

I will be specific: What if the individual is overweight, are we going to point out that they should lose some weight in order to be a better Krav Maga student? Does this help? Are they not aware of their own weight? Perhaps that is the reason they hesitated to join for so long and now that they finally had the courage to attend a class or a seminar, you had to undo all the growth this person went through.

Perhaps a person is very thin and fragile, are you going to mock their physical weakness? Some people are naturally coordinated, some are not, some learn quickly, others do not. Some students thrive in a group setting while others feel uncomfortable and hesitant. When you compare one student to another, you ruin one of those students.

I have heard the remarks; one participant looks at another and says to a friend,  look at her, so pathetic, how is it possible that anyone awarded her that belt that she is wearing.  But what this student making the comment does not realize is perhaps this other individual indeed understands the technique very well but moves in a slightly awkward way due to an injury or some other issue. We never know. The bottom line is we cannot compare people. One goes on a diet and starts working out and within a couple of months looks like an Adonis. Another might struggle for years and not see the results. Comparing the two CRUSHES the one who is "less successful". This is not a positive training environment.

In the yeshiva world of old, the Rabbinical academies that existed in Europe before the Nazis destroyed this way of life, there was a special position called Mashgiach, or Mashgihach ruchani, Spiritual guide.  This individual was a rabbi who was in charge of the personal spiritual growth of the students in the academy. This was an unusual position, one I have never seen in any other teaching environment. As a yeshiva student myself I can tell you first hand what this means; this rabbi is your friend, his only purpose is to help you, he walks around the study hall, leans over to you while gently putting his hand on your shoulder, and asks you how you are doing. He can help you with a difficult passage in the Talmud, or with a personal problem. He will listen to you, he will look at you, he will understand your struggles and help you.

To me, as a student, the role model for this position, was a man referred to simply as Der Alter von Slabodka, or in English, The Elder from Slabodka. Later I learned that his real name was Rabbi Nosson Tzvi Finkel, and Slabodka refers to a town in Lithuania near the big city of Kovno. The academy was established in 1882, and was closed by the Nazis in 1941. It was known as the "Mother of the Yeshivas" as it was indeed a great academy. The yeshiva was destroyed during the Holocaust, putting out a great light in Lithuania, but fortunately many students had already spread out to Israel and the United States. I was fortunate to study under some of their descendants and "feel" the warmth of Der Alter, even from this distance of time and space.

When rabbis would speak of Der Alter, their eyes would light up and their voices would soften, it was if the Elder, Der Alter was sending his spirit from the beyond.

What Der Alter taught was that no two students are the same, and no two students should EVER be compared to each other. Such a foolish act would destroy the "weaker" student and make arrogant the stronger student. Der Alter  would "size up" the students and see their potential; this one could be a great teacher, this one would be a great scholar but did not have the patience to teach, another did not have the Sitz fleish (the ability to sit and study for long periods of time) to study all day but could be a great fund-raiser for the academy, another would make a great administrator while yet another could be groomed to negotiate with governments for rights and privilege's for the academy.

Perhaps it was at this stage of life that this idea became ingrained in me; never to compare two students, that this is wrong, it is destructive! Each student must focus on himself, and not compare himself to others, even if they wear the same belt. You have a brown belt, another has a brown belt, great, you are color coordinated, nothing more. Yes, we do have absolute standards but we also know that each person is different. I may know that this student will never improve his round-house kick more than it is now. So what are my choices? never promote him because he will never perfect this kick? This will destroy him and he will never learn other defenses in martial arts. His kick works well enough for him. Remember - Perfect is the enemy of Good. It is good enough in my eyes.  A teacher must judge each student independently and make a wise decision. I have seen the positive results of this, often years later that person grows into a great martial artist. A teacher must see the future.

With the destruction of the Holocaust the Jewish world, the Yeshiva world, took a near fatal blow, but it was men like Der Alter who produced a generation of students who rebuilt this world. Today there are thousands of Yeshiva students in Israel, and the USA, and Europe who are a living testament to the success of this approach. And this is my approach with Krav Maga.

Personal Training -  If you are interested in personal Krav Maga training, please contact us on the form below.