Pushed to the Side
By Moshe Katz
CEO
Israeli Krav International

Most of us when presented with issues such as health, finances, national security or school safety will admit that these are indeed of paramount importance. Indeed it would be folly to argue otherwise. No man will say, my health is not important. No one will say there is no need to plan for retirement. Yet no action is taken.

Why? While all will admit that these are important issues most of us just can't be bothered to deal with it now, so we push it to side. We put it on the shelf, we place it on our "to do" list. However we must be honest; pushing it to the side is just a way of fooling ourselves. What we are saying in fact is - I don't want to be bothered, I do not want to do anything about it but yet I cannot admit that to myself, thus I push it off for later. And later means never.

Pushing it off is the same as signing its death warrant. Which reminds me of the US State Department in the late 1930's and early 1940's.

Hitler's Germany was tightening the noose around the necks of German Jews. Some has already left to the United States and were desperately trying to get their relatives out. They had everything lined up; sponsors as required by American law, housing, documents etc. But the USA did everything in its power to stop these undesirable people from entering the land of the free and the home of the brave.

Extensive research proves that the State Dept was Anti Jewish and did everything in its power to keep Jews out. But in later years members of the state Dept would deny this. But even their denials are weak.

Now when a man, a family, applies for immigration because he is facing the oncoming Holocaust, a "delay" in receiving his visa is the same as a death sentence. In such cases "pushing it to the side" is exactly the same as making a decision. And for the Jews of Germany and other countries that decision was the death sentence.

Allow me to translate a few concepts:

I will look into a self defense program = I have decided not to defend myself or prepare myself and my family for a violent attack even though these are becoming more common all the time.

My daughter is going off to college, perhaps I will suggest that at some point she look into a self defense program on campus = While I know that more than 25% of all American college women will report some form of sexual violence, that is really not enough for me to prepare my daughter for this strong possibility.

I really should look into home protection - While home invasion are among the most terrifying and deadly criminal violations, I would rather not spend the time and money on protecting my family. I will play Russian roulette with their lives and hope for the best.

Train with us in Israel!

The fasted way to become proficient in personal self defense is to spent two weeks with us in Israel and immerse yourself in Krav Maga training.

Defense in and around a car, parking lot, train station,

Defense for airports and airplanes 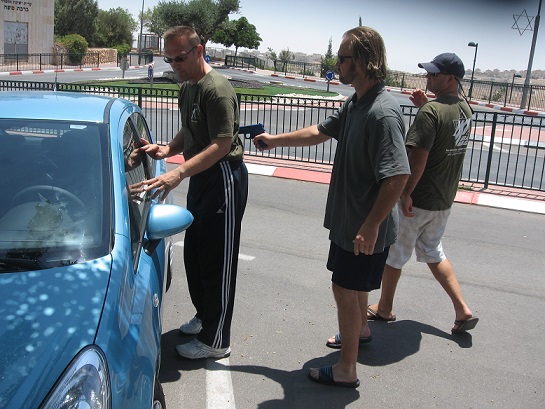 Do you know how to handle this situation? Are you going to push this issue to the side?