They say revenge is sweet. The nature of revenge is actually very cultural. In some cultures, revenge is not complete until the perpetrator and his entire village have been wiped out.

There are other forms of revenge. Some say the greatest revenge is a successful life. Someone tried to hurt you. Now you have a successful business, a happy life, and he is still struggling. He who laughs last laughs hardest.

But really, what if a terrorist kills someone. Where is the revenge? The terrorist was already shot dead on the spot. So he is now out of the picture. Some say leave it to God to avenge the killings; easy enough, no effort involved at all. Some cultures would now go and kill that terrorists' family and entire village. Yes, that sounds like great fun for the whole family. But what next?

Empty talk of revenge is useless. Words take little effort and have even less effect. So what is the best revenge?

Victims of the Holocaust want revenge against the Nazis. Well that time has pretty much passed. The US government made sure that most Nazis would be rehabilitated and given US jobs and pensions. (study history). Those dreaded Soviets, the new enemy, they knew how to deal with Nazis. But all that is gone. What do we do now?

What is purpose of revenge? to make yourself feel better or to make sure it does not happen again? In certain cases I agree the only solution is the obliteration of the enemy. But most of the time that is not going to happen. So what can we do?

The answer I believe is to take action so that "we don't get fooled again". My revenge is to be prepared. Our revenge against the Nazis is that we have an independent state, that we live as Jews, as free people in our own land. Our revenge is the young Germans who come to Israel and join us in our celebration of freedom. Every time a young German raises the flag of Israel it is a celebration of victory over the Nazis. We stand together.

Some people question me, why do I train Germans, Ukrainians, etc. My answer is that this is the greatest revenge against the Nazis and our greatest victory. Each one who joins us is a friend. Hundreds of thousands of Jews are alive today because of the friends we had during those dark years. Let us not underestimate the value of such friendship.

So today many are angry, a young Jewish woman was killed, she was in uniform, armed, but she was not prepared for this sort of attack. So what is our revenge? What form should it take?

My approach is training. We train hard so that the next person does not become a victim, but a hero. We train so that we will all be ready. Sadly, this woman, with all due respect, tried to reach for a gun when that was the last thing she should have done. Basics. Our revenge must be better training. Better preparation. Our revenge must be a more successful outcome in the next round.

We are all angry when someone gets attacked. We are furious. But what can we do? Do we choose empty words on social media or will we take action? Krav Maga classes are empty. Do you really want revenge or are you full of hot air?

Do you really love your family or just pretending? What kind of a person is too busy to take care of his family?

Just this week I had several inquiries from Jerusalem about joining us for Krav Maga training. ALL decided not to join us. Why? As one woman wrote, it is 43 minutes away by bus, that is too far.

I have nothing to add. 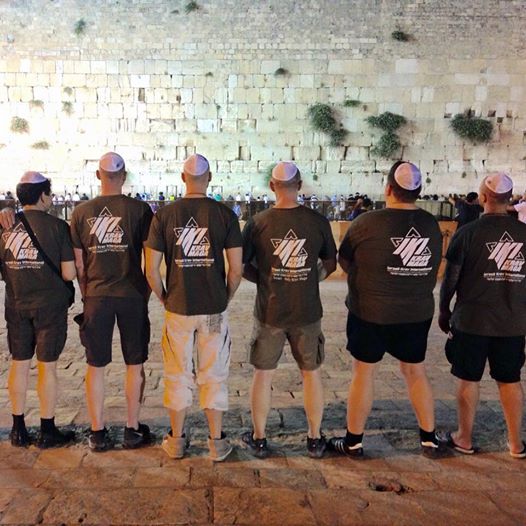 IKI Team Germany, led by Jurgen Kohler, June 2015, at the Western Wall. A photo is worth a thousands words. In 2017 they returned with 15 members. The flag is raised.

Train with Us in Israel, and around the world.