When the sons of Aharon the high priest were killed by Divine Fire, Aharon was still, silent. When a tragedy strikes we remain silent. There is a time for silence.

There is a time where the greatest respect you can show is by being silent. There are times when silence is the most powerful response, the greatest show of strength.

And silence is important when you really have nothing of value to say, nothing of significance to add.

"Even a fool who keeps silent is considered wise.  When a fool closes his lips he is deemed intelligent." (Proverbs 17, 28)

Silence, knowing how to use it is a powerful weapon. Silence can be a great threat, a warning.

When we see disaster looming we must cry out with all our force and might. When the great leader Ze'ev Vladimir Jabotinsky saw the Holocaust coming he traveled the world warning Jews in every language possible.

We know what silence brings....

When evil rises and people fear to speak out, evil prevails. People who fear to speak out may soon find that their ability to speak, or to breath, is soon over. Evil does not emerge overnight, it creeps up on us slowly and eats away at our freedom. We are afraid to speak and soon we are unable to speak.

We know what silence brings...

When tongues are silent soon heads will hang. Hatred and evil thrive on the silence of good people who are afraid to speak up. When each person is concerned only his personal well-being, only with his household and will not speak up for fear of harm to his interests, evil will spread.

We know what silence brings...

The hatred is there, do not be fooled. The violence is waking to erupt, do not be delusional. It is waiting in the wings, for the wind to change, for the climate to be right. Only the fool is fooled.

The hatred is there, carefully biding its time. Silence is not the correct response, silence only postpones the inevitable confrontation between good and evil. Our history teaches us very well what happens to those who choose silence. Soon their silence becomes permanent.

We have been there before, we know what silence brings, another Hitler waiting in the wings. (Leaving Mother Russia by Safam, 1977) 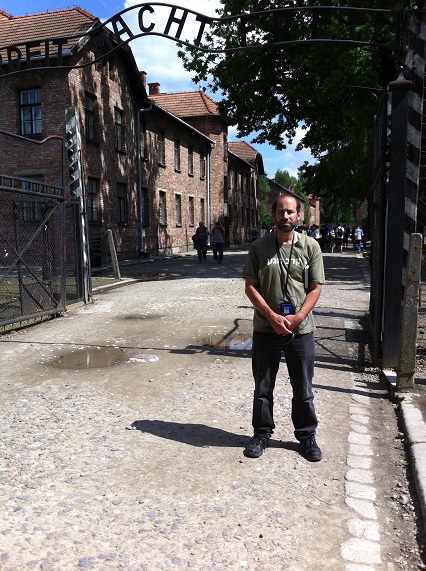 Moshe visiting Auschwitz, where many of his relatives perished. Silence leads to Auschwitz.