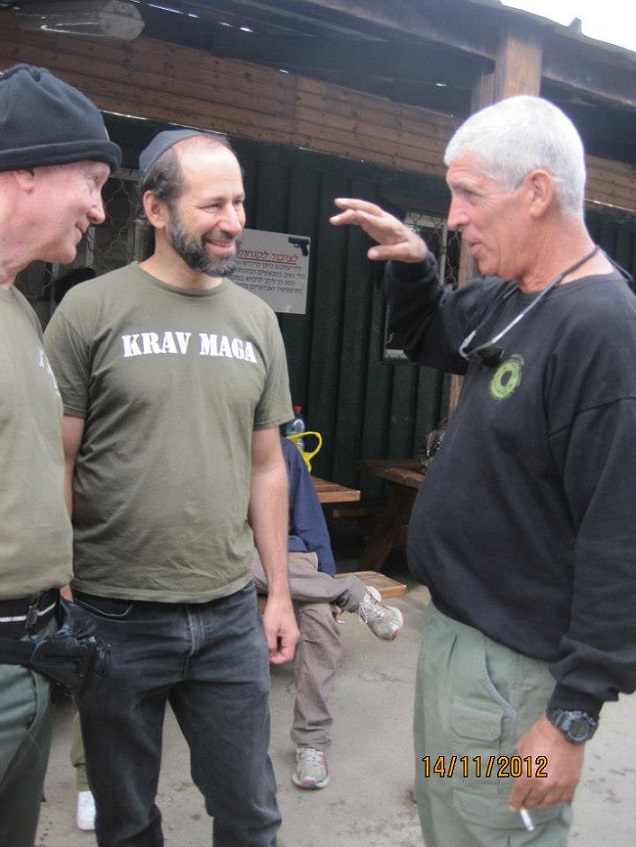 Moshe Katz chatting with two legendary fighters, on my right is Alan Mann from South Africa, and on my left is Shai Ish Shalom of Israel. Both are calm quiet individuals who have contributed a great deal to their people. Both have done more than most "tough guys" can even fantasize about. They teach in a calm relaxed way. They are not tempted by quick "easy" solutions.

From the dawn of mankind we have faced temptation. The philosophers have had to deal with this issue in every age.

For Krav Maga practitioners this temptation can be described as the speed, power, grabbing temptation.

We teach slowly. If I said a word in Russian or German really fast, and you are trying to learn the language, you would never ever learn the language. That is why at the Yemenite synagogue we recite all the prayers in a slow rhythmic way, so that the children and newcomers can learn the way.

I have been teaching Krav Maga and martial arts for well over 30 years and I see how people learn, and how they do not learn. I have observed students from kindergarten to Special Forces and presidential guards. I see how they learn and I learn from them.

One thing I have noticed is that students (and instructors who are my students) love speed and power, and they love to grab.

At my classes and seminars I demonstrate beyond a shadow of a doubt that under pressure we all fail to grab correctly. Under pressure we are more likely to break our fingers than pull off a successful grab, be it a knife, a gun or an arm. It simply does not work.

Grabbing requires precision, accuracy and speed that simply does not exist under stressful situations. Our body does not react this way. It is not something we can rely upon. That is why we at IKI prefer simpler gross motor moves, we trap and pin with our body (very gross motor) we use the body's natural balance. We do not rely upon speed, strength or grabbing. There is simply too much at stake, your lives!

As one who teaches seminars all over the world I have to be concerned with how the audience feels. At home I teach as I see fit but on the road I have to be more than a teacher. I must also be an entertainer for otherwise people will say, "Why should I spend money to do the same thing I did last year?"

So how can I move ahead with new material when the basics are flawed?

How can we advance when the foundations are still weak?

I recall when I was learning to play the guitar. I anxiously waited each week for my lesson. There was so much I wanted to learn. I wanted to advance. I wanted to play my favorite songs. But my wise teacher would first review the previous weeks' lesson. If he was dissatisfied we had to go over it again. No new material until the old was mastered. This is the correct way to learn.

But what if he feared that I would fire him and replace him? Well, he could teach exciting new material each week but what would be the point if I really could not play it well? Would I ever really enjoy playing the guitar so poorly?

Nay, there is only one way, review review and review. As the old joke goes, "How do you get to Carnegie Hall? (says a man simply asking for directions), and the other person answers, "Practice, practice, practice", i.e. if you wish to perform at the great Carnegie Hall you must practice until you are worthy of this great honor.

My friends, I look at your videos and photos and I say...you need more practice. You are making fundamental mistakes. You must go back and review, even if you are a teacher, especially if you are an instructor.

I see Krav Maga practitioners, students and instructors alike in a great hurry. They want to take that gun away at once so they chose what they think is a short cut. But you should know that some short cuts are very very dangerous.

This great temptation to grab everything, and to do so in a hurry with great force, is counter-productive. Instead of learning the technique properly people are drawn to the temptation of a quick grab. But in reality that grab is likely to miss. You will not get a solid grip, the assailant will pull away and shoot you dead.

I see it all the time; I teach a technique but then I see the students in such a hurry to grab, grab, grab. They think if they are only fast enough, quick enough, strong enough, it will work, but it will not!

Do not be led to temptation, your life is on the line.

Join us and experience the IKI way.